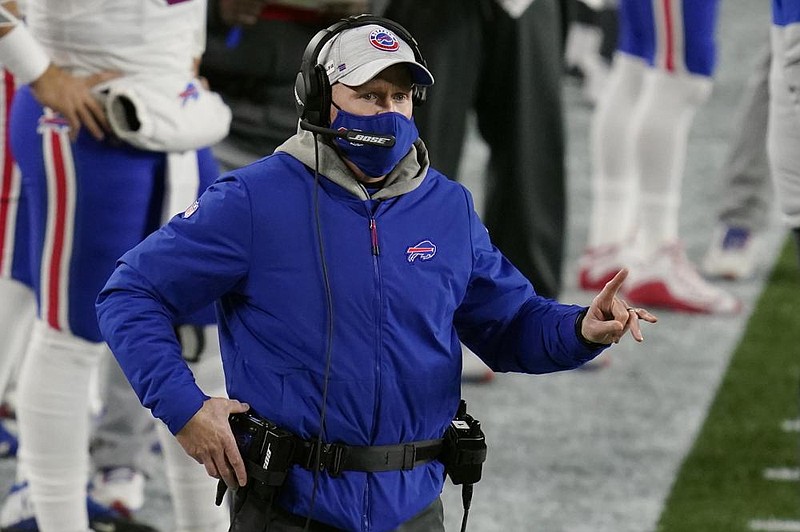 Buffalo Coach Sean McDermott had a vision in his first year of coaching the Bills in 2017 that he wanted to host an AFC playoff game. That vision will become a reality Saturday when the Bills host the Indianapolis Colts in the wild-card playoffs. (AP/Charles Krupa)

"He said, 'We're going to have a home playoff game. And we want to be walking into our stadium, going through the tunnel and listen to the salt crack underneath your shoes,' " Hyde recalled this week. "So that vision that we had since '17 has come true."

Though snow isn't in the forecast, leaving no need to lay down salt, Bills Stadium will be crackling nonetheless on Saturday -- and with a limited number of fans in attendance, too. The Bills (13-3), AFC East champs for the first time in 25 years, will host their first playoff game in 24 years by facing the seventh-seeded Indianapolis Colts (11-5).

Much has changed since McDermott's arrival and GM Brandon Beane's hiring in transforming a franchise known mostly for losing over a 17-year playoff drought.

In making their third playoff appearance in four years, the Bills have returned to relevance for the first time since their Jim Kelly 1990s heyday, when Buffalo was a postseason fixture during a run that included four consecutive Super Bowl appearances, all losses.

Adding to the throwback theme will be the presence of Colts Coach Frank Reich, who spent eight of his nine years in Buffalo as Kelly's backup.

"I will always be a Bills fan, except for this Saturday for sure," Reich said.

He was certainly a fan Sunday when Buffalo beat Miami, opening the door for the Colts to clinch a playoff berth with their win over Jacksonville.

Reich has Indianapolis making its second playoff appearance in three years. It's a team featuring a mixture of veterans and youth, with 17-year quarterback Philip Rivers at one end of the scale, and rookie running back Jonathan Taylor at the other.

For Rivers, in his first season in Indianapolis, this might mark his best and final chance to lead a team to the Super Bowl.

"I don't carry that with me day to day, that, `Man, played 16 years and never been a part of a championship,' " said Rivers, who had a 5-6 playoff record with the Chargers. "Shoot, it's a new beginning every day, and excited for each challenge and opportunity."

The 39-year-old QB comes off a season in which he and Tom Brady joined Drew Brees in a tie for second on the NFL list by topping 4,000 yards passing for a 12th time.

Rivers will be going head to head against one of the NFL's top young newcomers in Josh Allen. Buffalo's third-year starter oversaw an offense that scored a franchise record 501 points, while Allen broke a number of single season records with 4,544 passing and 37 touchdowns passing.

Allen has benefited from the addition of Stefon Diggs, acquired in a trade with Minnesota in March, and the familiarity of being in his third year playing under coordinator Brian Daboll. Diggs became Buffalo's first player to lead the NFL in catches (127) and yards receiving (1,535).

Allen is still stung by how he and the offense unraveled in blowing a 16-0 third-quarter lead of a 22-19 overtime loss at Houston in the wild-card round a year ago.

"If I could change it, I obviously would. But I'm glad I can't," he added. "I'm glad the lessons I've learned throughout the game and really throughout the three years I've been playing so far. Without failure, people don't know success." 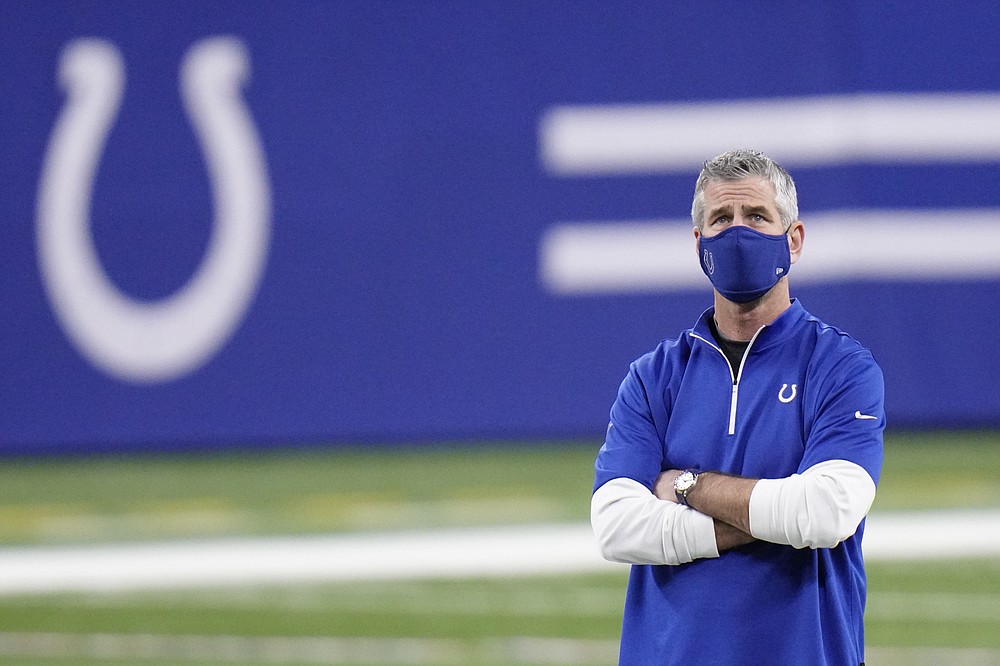 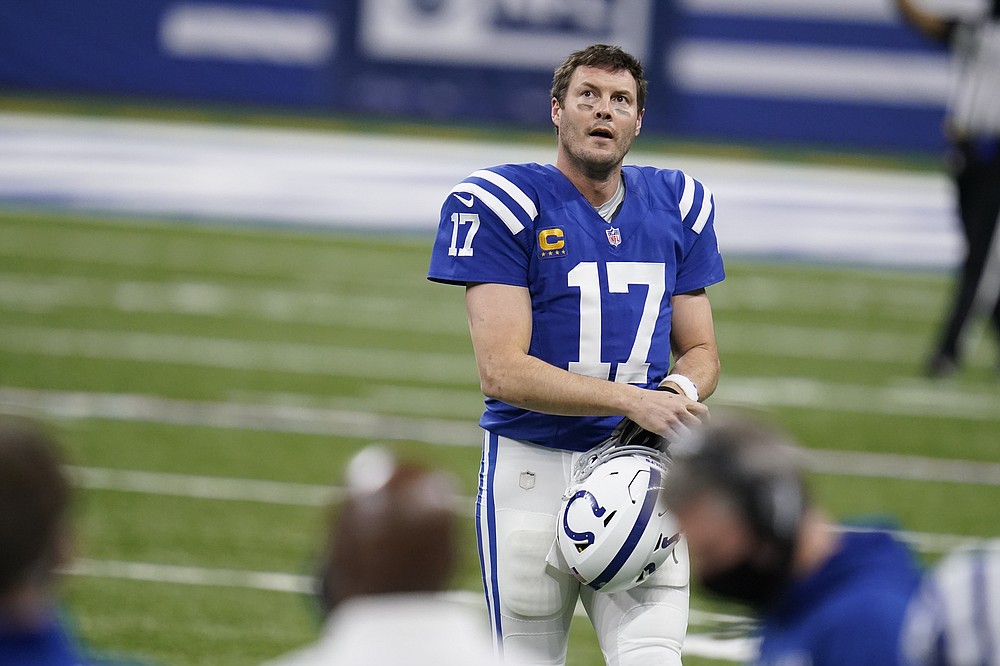 Indianapolis Colts quarterback Philip Rivers (17) walks off the field after throwing an interception during the second half of an NFL football game against the Jacksonville Jaguars, Sunday, Jan. 3, 2021, in Indianapolis. (AP Photo/Michael Conroy) 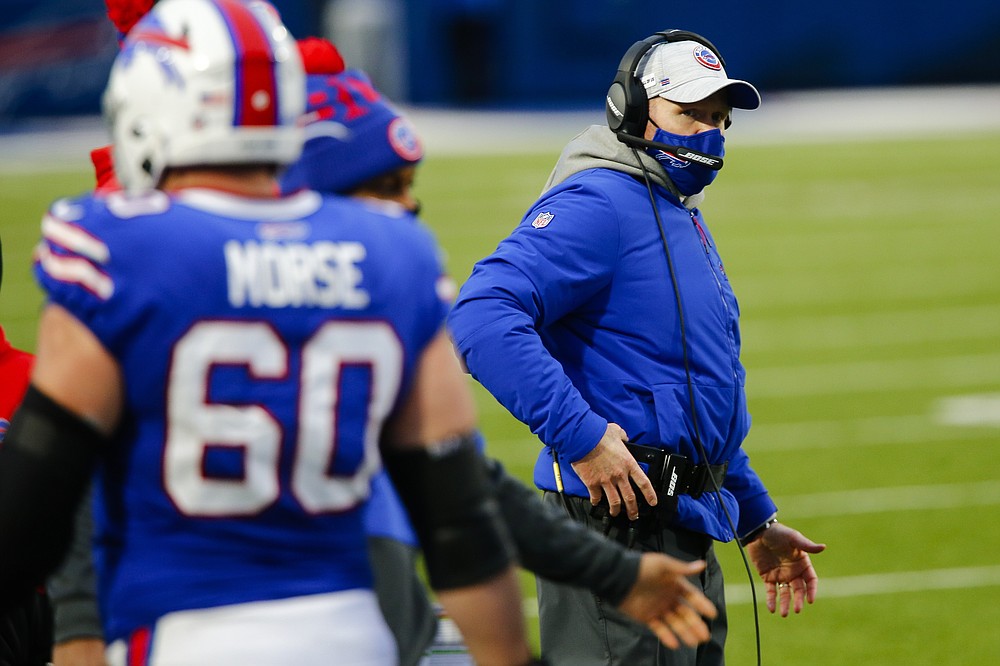