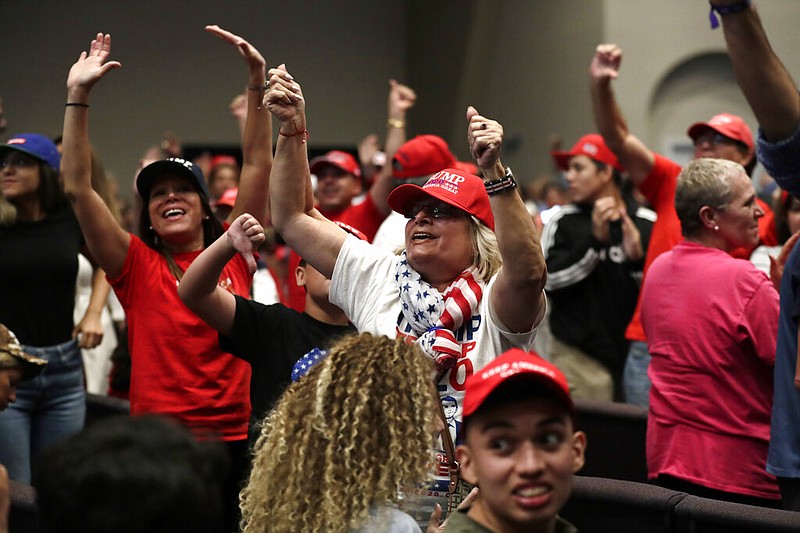 Supporters of President Donald Trump, attending a rally at the King Jesus International Ministry in Miami, turn to jeer and give the news media thumbs-down in this Jan. 3, 2020, file photo. Trump has long had a bond with white evangelical voters. (AP / Lynne Sladky )

Faith leaders across Christian denominations on Thursday expressed sadness and grief a day after violence broke out at the U.S. Capitol Building.

Thousands of protesters stormed the Capitol on Wednesday to try and overturn the results of the 2020 presidential election in support of President Donald Trump. Four people died during the protests, which temporarily halted the counting of the electoral college votes to certify Joe Biden as president and Kamala Harris as vice president.

The vote certification day happened to fall on Epiphany, a day known to Christians as the one in which a star led the three wise men, called Magi, to the newborn Jesus. During the insurrection, signs with slogans such as "Jesus saves" and campaign-styled signs proclaiming "Jesus 2020" could be seen among the protesters. Trump is known to have a large Evangelical voter base.

National faith leaders such as Russell Moore, head of the Southern Baptist Convention's Ethics and Religious Liberty Commission, called on Trump to end the mob violence.

Moore, who told the president Wednesday that it was his "moral responsibility" to call off the rioters, called the attack "immoral, unjust, dangerous and inexcusable."

Dr. Steven Smith of Little Rock, who likewise condemned the actions of the rioters, said the violence was counterproductive.

"I would denounce the violence," Smith said. "It's just somewhat ironic because clearly the people that are doing this are against the Biden presidency. But I think a better tack would be not to be against [a] divided election, but ... to be against the ideals that the Biden election represents. And the irony is, you handle that through the rule of law and through the institutions such as the courts and everything else that we have in place -- you don't handle that through violence.

"The sad irony of whatever needle move they wanted to make, it went the opposite direction, so their cause just went backwards because of this, and it's really, really, really sad," Smith said.

What people saw at the U.S. Capitol on Wednesday was anger, said the Rev. William Robinson.

"I do know we're in a serious moment, this political uncertainty even when the transition does [take place] and Biden does take over, he's got his work cut out for him," Robinson said. "We are in a great divide, and people do have a right to vote [for] their [political] parties, but then they also have to walk in intelligence. You can't just be a sore loser."

Meanwhile, the storming of the U.S. Capitol caused "a lot of pain and anxiety" among the members of Good Shepherd Lutheran Church in Fayetteville, according to the Rev. Clint Schnekloth.

He shifted what would have been the congregation's Wednesday night Bible study to instead be a time for people to process the day's events and pray. Meeting via Zoom during the covid-19 pandemic, he said several times as many people as usual attended the remote event Wednesday, openly expressing their reactions in the safe, sacred space.

Schnekloth said a Black member of the congregation, currently a student at the University of Arkansas at Fayetteville, expressed "rage and pain seeing how gently white terrorists were treated than, say, how the Black Lives Matters [protesters] were handled earlier [last] year."

What happened at the U.S. Capitol was police bias "illustrated at the federal level," he said.

Schnekloth said the invocation of Jesus' name on signs at the U.S. Capitol was a way to dress up and make excuses for evil actions.

"As a Christian, when I see signs like that, I typically have always the same response, which is that [it's] just people dressing up their anti-blackness and antisemitism with religious clothing."

"I don't think there's anything Christian about that insurrection at all," Schnekloth added. "What people like to do is put religion on the evil things that they do to justify them."

The biggest takeaway for the Fayetteville pastor concerned the impact leader influence can have on a group.

"The biggest thing we saw happen [Wednesday] is that leadership really, really matters," he said. "The reason they all gathered is because the president of the United States of America asked them to. I'm hopeful that more reasonable leadership will help quiet some of the 'organized crazy.'"

The first thing the Rev. Carey Stone mentioned in a note to parishioners Wednesday was a sense of grief. As priest of St. Luke's Episcopal Church in North Little Rock, much about Wednesday's violence evoked grief, he said, and then he saw the "Jesus saves" signs among the protesters.

"That grieved me. That just sort of stung," Stone said. "It made me ask, 'Where is Jesus?' because you've got all of these people and Jesus is supposedly with all of them, and seeing that sign kind of brought that [notion] to the forefront. It's likely a good number of people in that crowd thought Jesus was with them."

His flock has added eight people since the beginning of the pandemic last year; it was the first time that the church had put its services online, he said. The congregation of around 150 active members is somewhat divided in political beliefs, he said, and he considered the task of remaining balanced in his ministry.

Stone eventually found words of comfort and guidance in the Episcopal Church's Book of Common Prayer. It includes a prayer for the human family, and a prayer for times of conflict -- the latter of which calls for people to "confront one another without hatred or bitterness, and to work together with mutual forbearance and respect."

"I have people from all over the political spectrum, so I find myself saying, 'What is the core truth?' and in short, it simply comes back to love," Stone said. "It's that great commandment of Christ -- love God with all of our heart, mind and strength, and to love our neighbor as we love ourselves.

"If my actions don't point to love and reconciliation, then you sort of have a hard time saying that's about Christ."