Hogs try to settle on another lineup 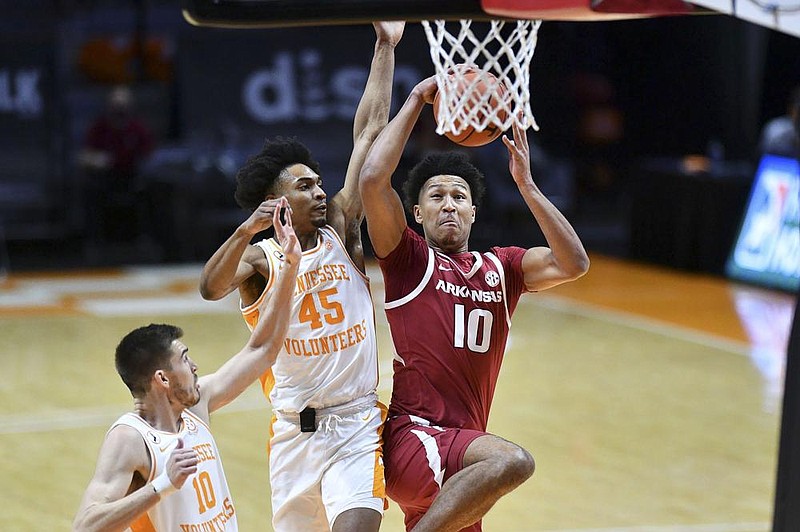 Jaylin Williams, a 6-10 freshman, started in place of 6-3 freshman guard Davonte Davis for Arkansas on Wednesday against Tennessee, as Coach Eric Musselman tinkered with the lineup following Saturday’s loss to Missouri. Williams had 6 points, 2 rebounds, 1 blocked shot and 4 turnovers in 14 minutes against the Vols. (Saul Young/Knoxville News Sentinel via AP)

FAYETTEVILLE -- After having the same starters for eight consecutive games, the University of Arkansas basketball team could have a third different lineup in three games when the Razorbacks play Georgia on Saturday in Walton Arena.

After Smith had surgery last Friday that is expected to sideline him for three to six weeks, freshman guard Davonte Davis started in the Razorbacks' 81-68 loss to No. 12 Missouri.

Coach Eric Musselman decided to go bigger at No. 9 Tennessee on Wednesday night and started 6-10 freshman Jaylin Williams for the 6-3 Davis.

In Musselman's Zoom call with the media after the Vols beat the Razorbacks 79-74, he indicated another lineup change is coming without being specific.

Williams had 6 points, 2 rebounds, 1 blocked shot and 4 turnovers in 14 minutes against the Vols.

"Jaylin did a great job," Musselman said. "He's worked so hard. We've got to work with him on the turnovers ... But he gave us great energy.

"There will be another change in the starting lineup when we get ready for Georgia."

Musselman didn't say what will change, but one possibility could be Jackson -- a graduate transfer from New Mexico -- starting for Sills.

Considering the competition, Jackson had his best game as a Razorback against the Vols with 14 points and 9 rebounds in 33 minutes.

Jackson scored a season-high 15 points when Arkansas opened with a 142-62 victory over Mississippi Valley State, but the Delta Devils are ranked last in the NCAA's NET rankings at No. 342.

Tennessee is No. 3 in the NET rankings.

Jackson, who played one minute in the Missouri game, hit 5 of 10 shots on Wednesday night, including 3 of 6 three-pointers.

In the previous nine games, Jackson averaged 3.2 points and 12.4 minutes.

"I feel like I'm a player, you know what I'm saying?" said Jackson, who has scored 1,048 career points. "I've just got to be consistent in [the coaches'] eyes, have a positive mindset.

"I know I haven't been playing that much, even though I feel like I should've been playing. But I just don't let that get to me.

"I just work harder, keep grinding in the gym, be a positive voice on this team. [Wednesday night] I just felt like it's a big game and it's an opportunity that I was given, and I took advantage of it."

Musselman, who on Monday praised Jackson's attitude and work habits, said after the Tennessee game that he has earned more playing time.

"Vance has been as patient as anybody," Musselman said.

Jackson and Williams are among 10 scholarship newcomers.

"I've said many times we would continue to evolve with so many new faces," Musselman said. "We would evolve with rotations.

Sills -- a junior guard and one of two scholarship returnees along with junior forward Ethan Henderson -- was held scoreless at Tennessee for the first time in 17 games going back to an 0-of-7 shooting performance at Florida last season.

Coming into Wednesday night's game, Sills was averaging 13.9 points, but he missed his only shot attempt and played 18 minutes. He was 1 of 10 against Missouri and had six points.

It's the fewest points Sills has scored in back-to-back games since he combined for six against Vanderbilt and Kentucky last season.

"Desi's had some really hot streaks and some cold streaks in the year and a half I've been here," Musselman said. "He's struggled the last two games, for sure."

Sills showed last season he could be a spark off the bench. Playing as a reserve the last six games, he averaged 14.7 points.

Prior to the last two games, Sills scored a career-high 23 points in the Razorbacks' 97-85 victory at Auburn in the SEC opener. He averaged 18.5 points in a four-game span.

Another option for Musselman against Georgia could be starting junior guard JD Notae, who has played off the bench in every game, but is averaging 15.7 points after leading the Razorbacks with 19 at Tennessee.

"JD is a ballplayer," Jackson said. "He's been proving that since I've been here. It's nothing new to me. I know what he's capable of. Happy for him that he's able to be productive and ball out for us."

Jackson said he's confident he can build on his success against the Vols.

"Most definitely," Jackson said. "All I needed was just the opportunity, and it's up from here."