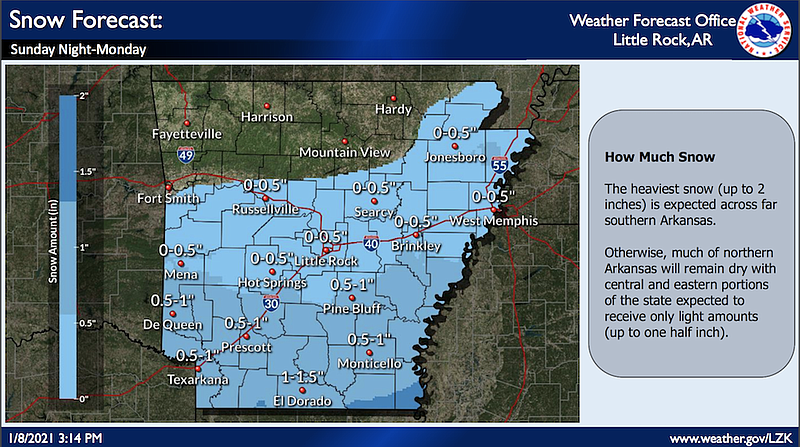 The National Weather Service is predicting up to 2 inches of snow across far southern Arkansas this weekend.

The southern third parts of the state can expect up to an inch of snow, with some parts seeing as much as two inches Sunday going into Monday, according to the National Weather Service.

Meteorologists are currently tracking a storm system in the New Mexico area along the Gulf Coast. The storm's path will determine how far north will see snow, according to meteorologist Jeff Hood.

Should the system trend father south, only southern Arkansas will see snowfall, forecasts show. Should the system go farther north, snowfall potential will expand across Central Arkansas, according to the National Weather Service.

Conditions will be dry Saturday and most of Sunday, Hood said, with snow likely to begin Sunday, depending on location. Snow may not reach some areas until Monday morning, Hood said.

Saturday through Monday morning, morning lows will be below freezing, in the lower 20s statewide, Hood said. The highs on Saturday and Sunday in Central Arkansas will be in the lower 40s, while statewide will see highs in the 30s to 40s, he added.