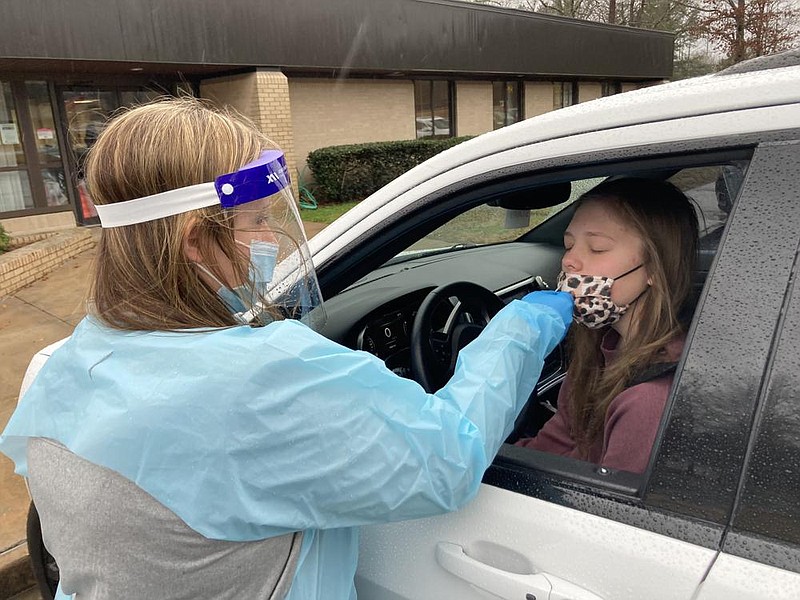 Emma Doggett, a sophomore at White Hall High School, is tested for covid-19 Thursday by district nurse Kelly Andrews. Doggett was there with her mother, Brooke Doggett, who works at the high school. (Pine Bluff Commercial/Byron Tate)

Students, faculty and staff of the White Hall School District were offered free covid-19 rapid screening services, which began Tuesday after the district was awarded a grant through the Clinical Laboratory Improvement Amendments program in December.

White Hall School District Superintendent Doug Dorris said he received an email from the Arkansas Department of Health offering grants to school districts across the state that were interested in the free program. "We got approved three to four weeks later, and our district nurse went through the certification process," Dorris said.

District nurse Kelly Andrews, who received her certification during the Christmas break, said she was surprised that the White Hall School District was approved. "I figured it would go to more of the rural schools that don't have as many options and availability," she said.

Testing is administered in designated parking spots at 1020 W. Holland Ave. in White Hall at the administration building. Those with symptoms can call the designated hot line at (870) 835-3869 to schedule an appointment. Appointments are made between 9 a.m. and 11 a.m. and 1 p.m. to 2:30 p.m. daily. Andrews said she has had appointments all week since Tuesday.

"The convenience of it all is because it's such a heavy influx into the health department and the doctors' offices to get tested," she said. "This allows us to have one more place of availability to get tested."

Dorris said this also allows the students and staff members to return back to campus quicker. "If they were quarantined and their test was negative, they can get back into school quicker that way," Dorris said. "You can get tests on day five and come back to school on day eight if you're negative."

Dorris said to take the test sooner than five days after exposure could result in an inaccurate reading. The tests deliver results in approximately 15 minutes. All students must be accompanied by their parent or guardian.

According to Andrews, her certification is valid for two years but hopes the pandemic does not last that long. "As long as we are in a pandemic, I believe they will continue to supply us with the supplies we need," Andrews said.

Dorris said the absence of students because of quarantine has been the ongoing issue for many school districts across the state but says White Hall has been lucky, averaging only about two students a day.

"We hope our students and staff take advantage of this free service that our district is offering," he said. "We are dedicated to helping keep everyone safe and healthy during this time."