Afghan-Taliban peace talks' new round off to a slow start 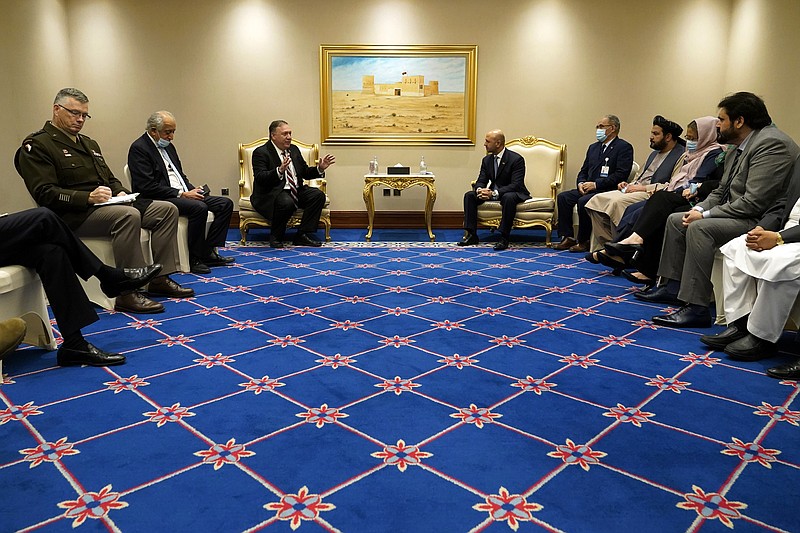 FILE - In this Nov. 21, 2020 file photo, Secretary of State Mike Pompeo, center left, and his aides meet with Afghanistan's State Minister for Peace Sayed Sadat Mansoor Naderi, center right, and the Islamic Republic of Afghanistan's peace negotiation team amid talks between the Afghan government and the Taliban, in Doha, Qatar. Afghan negotiators are to resume talks Tuesday, Jan. 5, 2021, even as hopes are waning, and frustration and fear is growing over a spike in violence that has combatants on both sides blaming the other. The change in the U.S. administration is likely to drag out the opening days of the talks as both sides wait to see whether Biden will stick to the deal brokered by Trump. (AP Photo/Patrick Semansky, Pool, File)

ISLAMABAD -- The latest round of peace talks between the Taliban and Afghan government negotiators that began this week in Qatar has been off to a slow start as concerns grow over a recent spike in violence across Afghanistan.

The talks, which are taking place in Qatar where the Taliban maintain a political office, resumed Tuesday but then adjourned until today, in part because the chief Taliban negotiator was in Pakistan.

A senior U.S. defense official was also in Pakistan and met the country's powerful military leadership Friday. According to a U.S. Embassy statement, the meeting between the military and acting Assistant Secretary of Defense for Indo-Pacific Security Affairs David Helvey affirmed an urgent need for a reduction in violence in Afghanistan.

Both sides "discussed the urgency of reducing violence and restarting meaningful negotiations between the Islamic Republic negotiators and the Taliban," according to the statement.

Helvey also told Pakistan's Chief of the General Staff Lt.-Gen. Sahir Shamshad Mirza that Washington was committed "to a long-term, mutually beneficial security partnership with Pakistan" and wanted to strengthen cooperation on counterterrorism, the statement added.

Pakistan wields significant influence over the Taliban and has been key in getting them to the negotiating table. Islamabad has repeatedly called for a reduction in violence, but has also said the fighting must be reduced from the Afghan government side as well.

Mullah Abdul Ghani Baradar, the Taliban leader who negotiated a U.S.-Taliban deal struck in February, and the chief Taliban negotiator Mullah Hakim were in Pakistan until Wednesday, though little is known of their activities here. The Taliban leadership council is headquartered in Pakistan's southeastern city of Quetta.

U.S. peace envoy Zalmay Khalilzad has warned both sides against squandering the opportunity at peace and has been pressing for a reduction in violence that would lead to a cease-fire.

According to one Taliban official, who spoke on condition of anonymity because he was not authorized to speak to the media, said the Taliban don't trust the Afghan government. Taliban spokesman Mohammad Naeem appeared to rule out an immediate cease-fire.

Naeem said Friday that the agenda of the talks in Qatar has yet to be finalized. "There is no specific time as to when the issue of a cease-fire will be decided," he said.

However, Afghan President Ashraf Ghani this week ruled out an interim government with the Taliban, according to Afghan media reports. Ghani also did not meet with Khalilzad during his visit to Kabul this week.

"The benefit of a coalition governance structure, which includes the Taliban, is that they can continue the negotiations from within the power structure for the overhaul of the legislative, executive and judiciary pillars of the country," said Torek Farhadi, a former adviser to the government and political analyst.