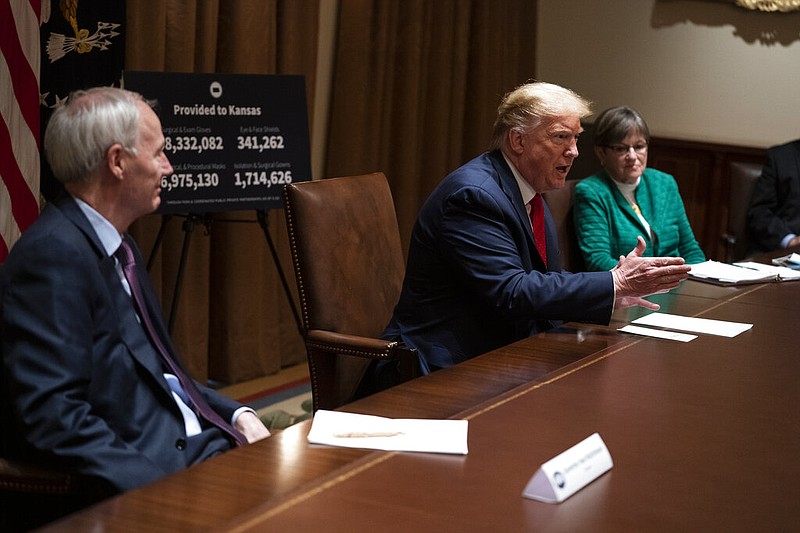 President Donald Trump speaks during a meeting with Gov. Asa Hutchinson and Kansas Gov. Laura Kelly in the Cabinet Room of the White House on Wednesday, May 20, 2020.

Gov. Asa Hutchinson said Friday that he wants “this administration to end” after a mob supporting President Donald Trump broke into and ransacked the U.S. Capitol this week.

But the Republican governor would not commit to calling for Congress to impeach the president.

Despite his alarm at the riot — which left five people, including a Capitol police officer, dead — the governor told reporters that he did not see any “practical” options for removing the president over the final two weeks of Trump’s term.

“This was a terrible exercise of judgment and an exercise in misleading his supporters,” Hutchinson said of Trump’s rallying of his supporters. “And the result of it is the riots in the nation’s capital, destruction of property and loss of life and a black mark on our democracy.”

Hutchinson, a Republican who endorsed Trump for reelection, had publicly accepted Democrat Joe Biden’s victory in the 2020 presidential election before this week’s riot over the counting of Electoral College votes.

Asked Friday whether he would support another attempt to impeach the president, Hutchinson questioned the practicality of such a move given the limited time before Biden’s Jan. 20 inauguration. He added that he did not believe Trump would resign.

“It’s not going to be a quick result, and it’s going to be divisive once again,” Hutchinson said. “If I’m President-elect Biden, I would probably be calling the Senate leaders and House leaders and saying, ‘Let’s do inauguration.’ The world does not need to see an impeachment trial the day before the inauguration of the new president.”

Biden himself said Friday that he would leave the question of impeachment up to Congress.

Meanwhile, House Speaker Nancy Pelosi threatened to move ahead with impeachment next week if Trump does not step down.

Three other Republican governors — Charlie Baker of Massachusetts, Phil Scott of Vermont and Larry Hogan of Maryland — each called for Trump to resign or be removed from office this week, according to The Hill.

Hutchinson, a former federal prosecutor, was also asked Friday whether he believed criminal charges should be filed against the president for his actions, which included a speech in which the president told his supporters, “You’ll never take back our country with weakness. You have to show strength.”

“That’s not something I’m in a position to judge,” Hutchinson said of the prospect of charges. “Those are decisions that United States attorneys have to weigh. … It’s a much longer conversation.”

The governor quickly added, “We need to heal as a nation, and you heal as a nation by moving beyond this quickly, having the debate on policy within the next administration and also we need to have those that are responsible for that [attack on the Capitol] prosecuted.”

Arkansas Attorney General Leslie Rutledge did not participate in Wednesday’s pro-Trump protests and was not among the thousands who marched to the U.S. Capitol, spokeswoman Stephanie Sharp said Friday.

Neither was former White House press secretary Sarah Huckabee Sanders, according to Chris Caldwell, federal co-chairman of the Delta Regional Authority and a longtime Sanders friend.

Sanders, who is weighing a run for governor in 2022, spent Wednesday in Little Rock, Caldwell said.

Rutledge, a 2022 gubernatorial candidate and national co-chairwoman of Lawyers for Trump, was not “in or around D.C. this week,” Sharp said.

She declined to reveal the city or state where Rutledge had been on the day of the riots.

Pressed for additional details, Sharp released a written statement, attributed to Rutledge, that said: “The Attorney General was with her husband and young daughter spending time together ahead of the hectic legislative session and rigorous campaign schedule.”

In December, at Trump’s urging, Rutledge had thrown Arkansas’ weight behind Texas’ lawsuit challenging the legitimacy of the votes in Georgia, Michigan, Pennsylvania and Wisconsin.

The U.S. Supreme Court ruled that Texas lacked standing to dispute election outcomes in other states.

In a written statement Thursday, Rutledge suggested the chances of overturning the election results likely had evaporated by the time Congress gathered.

“While I was concerned about the numerous reports of irregularities during the 2020 election, I believe that all avenues of review were exhausted by the end of December. The difference in perspective on this issue by a handful of Republicans in Congress is the same exercised by a small number of Democrats in the past as it is part of our Constitutional structure.”

Overall, 147 House and Senate Republicans objected Wednesday to at least some of the Democratic electors, according to The New York Times. That included House Minority Leader Kevin McCarthy, R-Calif., and a majority of the House Republican caucus.

Sharp later denied that Rutledge had been referring to the 147 lawmakers when she used the term “handful.”

“The Attorney General was not specifically talking about those votes in her comment,” Sharp said.

Asked whether Rutledge had supported Wednesday’s congressional efforts to reject Democratic electors from Arizona, Pennsylvania and elsewhere, Sharp said Thursday, “The Attorney General was not involved in that process.”

“The Attorney General was not involved in any capacity with the certification of election results on January 6th,” Rutledge said in a subsequent written statement released by Sharp.

Rutledge “had no knowledge, role or involvement regarding any efforts made by RAGA [the Republican Attorneys General Association] or RLDF [the Rule of Law Defense Fund]” to encourage participation in Wednesday’s protests, Sharp said.

The Rule of Law Defense Fund, an arm of the Republican Attorneys General Association, was one of the rally’s organizers, funding a robocall that invited people to “march to the Capitol building and call on Congress to Stop the Steal.”

“We are hoping patriots like you will join us to continue to fight to protect the integrity of our election,” it stated.

Alabama Attorney General Steve Marshall, who leads the fund, said “decisions” regarding the rally were made by fund staff without his knowledge or authorization and would be investigated, the Alabama Political Reporter wrote Friday.

News of the robocall had previously been reported by Documented, a self-described “watchdog group that investigates how corporations manipulate public policy, harming our environment, communities, and democracy.”

Sanders also declined to say whether pro-Biden electoral votes should have been rejected, instead expressing her opposition to “senseless violence.”

“While I don’t like the results of the election, I support the President’s commitment to a peaceful transfer of power now that the election is over,” she wrote in a text message Thursday.

One day before the mob attack on the Capitol, state Sen. Jim Hendren, R-Sulphur Springs, said that efforts to overturn the results of a free and fair election “undermine the foundation of our democracy.”

“I’ve lost elections. Many elections don’t go the way I want. But I always appreciate the fact that, here in this country, we have a free electoral process and we respect the will of the people,” the possible gubernatorial candidate said.

Lt. Gov. Tim Griffin, who has already opened his 2022 bid for the Republican gubernatorial nomination, said Wednesday that Congress should recognize each state’s official electoral slates.

“I honor and respect the Constitution and the process the Founding Fathers established, including the vote of the Electoral College,” he said.

Like Sanders, Griffin, Hendren and Rutledge have all condemned Wednesday’s violence.