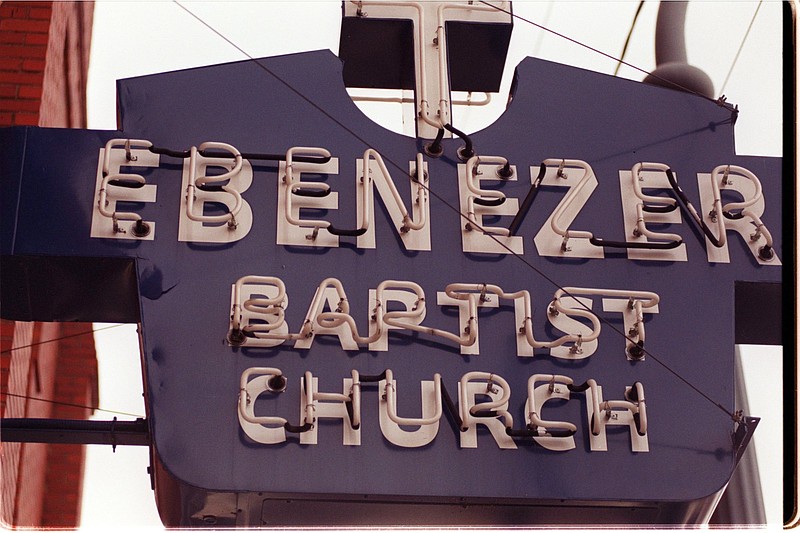 This sign hangs outside the old Ebenezer Baptist Church in Atlanta, Georgia. Martin Luther King, Jr.'s father served as its pastor. It is now open daily to the public as part of The King Center. ( CARLTON WINFREY/DETROIT FREE PRESS)

On Feb. 4, 1968, the Rev. Martin Luther King Jr. mounted the pulpit of Atlanta's Ebenezer Baptist Church, where he'd grown up listening to his father preach against social injustice in a segregated world.

As leader of the civil-rights movement, King was often away from the historic Black church led by the Rev. Martin Luther King Sr. But he tried to make it back to Ebenezer for the first and third Sunday services.

Now, exactly two months before his assassination, he delivered a sermon with an uncannily prescient message. In "The Drum Major Instinct," King -- long the target of death threats and one previous assassination attempt -- reflected on how he wanted to be remembered when he was gone.

On this Sunday morning, King's words rose with a thunderous rhythm: "If any of you are around when I have to meet my day, I don't want a long funeral. And if you get somebody to deliver the eulogy, tell them not to talk too long. ... Tell them not to mention that I have a Nobel Peace Prize -- that isn't important."

"Make it plain," his father would often shout, punctuating the sermon with the call-and-response tradition of the Black church.

Now a different pastor commands the pulpit at Ebenezer: the Rev. Raphael Warnock, who won a seat in the U.S. Senate. Warnock, a Democrat who embraces a platform of social justice in the tradition of Ebenezer's pastors, defeated Republican incumbent Kelly Loeffler this week in a Georgia runoff election that -- along with the win of fellow Georgian Jon Ossoff's unseating of incumbent Sen. David Perdue (R-Ga.), has made Democrats the majority party of the Senate.

"Somebody asked why a pastor thinks he should serve in the Senate," Warnock said in a campaign video. "Well, I committed my whole life to service and helping people realize their highest potential. I've always thought my impact doesn't stop at the church door. That's actually where it starts."

Warnock's campaign has put Ebenezer back in the spotlight. The 134-year-old church, founded in 1886 by formerly enslaved Black people, has always been a central hub for the Black freedom struggle. Its role in shaping Martin Luther King Jr. and serving as a platform for his ideas makes it one of the most prominent churches in U.S. history.

"Williams was a dynamic minister and a great preacher," Ridgeway said. "He preached a social justice gospel. He was responsible for one of the first [Black] high schools in Atlanta. He and some other pastors were instrumental in founding the Atlanta chapter of the NAACP. He really brought Ebenezer to its influence in Atlanta."

Williams grew Ebenezer's membership and eventually moved the congregation to a new building on Auburn Avenue in 1922.

He also hired the Rev. Martin Luther King Sr. as an assistant pastor at Ebenezer, where he married his boss' daughter, Alberta Christine Williams, on Thanksgiving Day in 1926, according to the King Institute at Stanford University. When the Rev. Williams died in 1931, King Sr. became Ebenezer's pastor.

"King, Sr., not only engaged in personal acts of political dissent, such as riding the 'whites only' City Hall elevator to reach the voter registrar's office," according to the King Institute, "but was also a local leader of organizations such as the Atlanta Civic and Political League and the National Association for the Advancement of Colored People."

In the 1930s, King Sr. led a march on Atlanta's City Hall "to protest separate water fountains for Black and white citizens," Isaac Newton Farris Jr., a grandson of King Sr., wrote in an introduction to "Daddy King: An Autobiography."

In 1939, King Sr. organized a "massive voter registration drive to be initiated by a march to City Hall." During a rally at Ebenezer, "King referred to his own past and urged Black people toward greater militancy," according to the King Institute. "'I ain't gonna plow no more mules,' he shouted. 'I'll never step off the road again to let white folks pass.'"

King Sr. pastored Ebenezer while his wife, whom he called "Bunch," directed Ebenezer's music ministry. Their children grew up in the church. Ebenezer was where a young Martin Luther King Jr. attended Sunday School. It's where, in 1947, King Jr. preached his first sermon and was ordained a minister.

When King Jr. became pastor at Dexter Avenue Baptist Church in Montgomery, Ala., in 1954, Ebenezer members traveled more than 160 miles to attend his installation service. He became a co-pastor at Ebenezer in 1960, according to the church's history.

"When Martin Luther King Jr. was in the midst of the civil-rights movement, he was still a very active pastor at Ebenezer. He married people, conducted funerals and baptized people," Ridgeway said. "He performed his pastoral duties. He tried to be there on the first and third Sundays every month. On Bloody Sunday in Selma, Ala., Martin Luther King Jr. was preaching at Ebenezer."

King Jr. remained as co-pastor of Ebenezer until he was killed in 1968. His mother and father were at Ebenezer when they learned of their eldest son's assassination.

"Ebenezer is a busy church, and we were there almost every evening for a scheduled activity," the senior King wrote in his autobiography. "When we arrived at the church, Bunch and I found our car's path into the parking lot next to the church blocked by a driver who kept honking the horn."

Cars were backed up along Auburn Avenue. The senior King rushed into the church and upstairs to his study. He turned on the radio.

"M.L. had been shot, an announcer was saying, and he'd suffered a very serious wound," he wrote. "The crying was silent as we waited for more specific news. I began praying, filling the study with my words. Soon more news had been received by a local radio station that indicated M.L. was hurt but still alive. Another report came through, saying the bullet had struck him in the shoulder, and I heard myself asking, 'Lord, let him live, let him be alive!'"

But then the reporter announced: "Martin Luther King, Jr., had been shot to death while standing on a balcony at the Lorraine Motel in Memphis."

King Sr. turned to his wife: "Neither of us could say anything. We had waited, agonizing through the nights and days without sleep, startled by nearly any sound, unable to eat, simply staring at our meals. Suddenly, in a few seconds of radio time, it was over. My first son, whose birth had brought me such joy that I jumped up in the hall outside the room where he was born and touched the ceiling -- the child, the scholar, the preacher, the boy singing and smiling, the son -- all of it was gone. And Ebenezer was so quiet; all through the church, as the staff learned what had happened, the tears flowed, but almost completely in silence."

More than six years later, on June 30, 1974, his mother, Alberta, was fatally shot as she played "The Lord's Prayer" on the organ at Ebenezer. A 69-year-old church deacon, Edward Boykin, was also killed -- each fatally shot by Marcus Chenault, a 21-year-old man from Ohio shouting, "All Christians are my enemies," according to the King Institute. "Alberta Williams King died later that day at the age of 70."

After Alberta's funeral, King Sr. gathered his grandchildren. "Daddy King had already lost Martin to an assassin's bullet and (his younger brother) Alfred Daniel, called A.D., in a drowning accident. Losing his life companion after these other tragedies might have broken a lesser man. But not Daddy King," Andrew Young, former U.S. ambassador to the United Nations, wrote in the introduction to "Daddy King."

"These were hard questions, but Daddy King did not waver in his faith. He let his grandchildren express their bitterness and cry their tears. His counsel to them, however, was clear and unequivocal. 'I know it's hard to understand, but we have to give thanks for what we have left. God wants us to love one another and not hate.'"