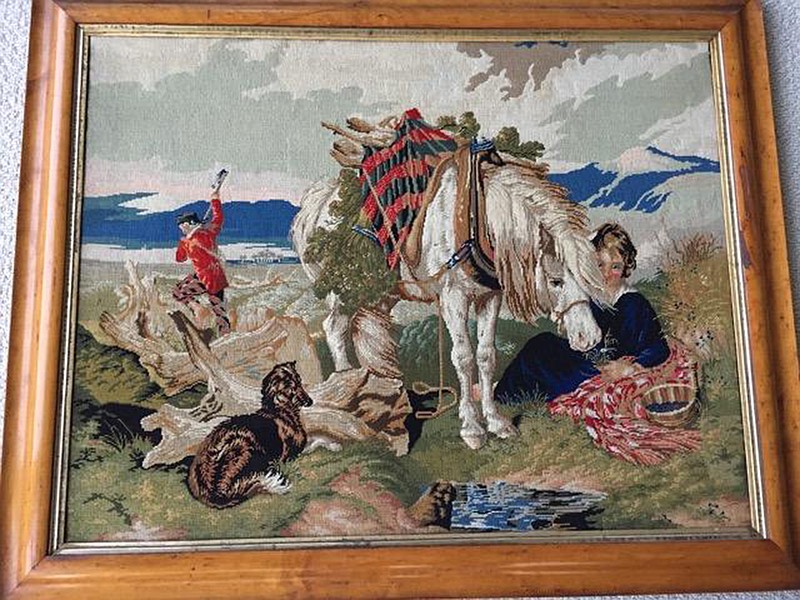 This is a beautiful piece of needlework, but it is a bit out of step with modern tastes. (Handout/TNS)

DEAR HELAINE AND JOE: I recently inherited a framed needlepoint tapestry of "The Woodcutter" by Edwin Landseer. I believe the work was commissioned in 1863. It appears to be in near-perfect condition. There is a piece of paper on the verso, which states, "Commissioned Feb. 5th '63, Finished June 10th '63, 200,700 stitches." We would like to sell the piece.

What we see in the photographs is a lovely interpretation of English artist Edwin Landseer's painting "The Woodcutter," which he originally created in 1837. It appears to have been crafted with wool yarn, probably on a canvas background, and would be called "Berlin work."

Berlin needlework started in the early 19th century with patterns published in Germany. They were hand-colored, and the idea was to trace the pattern onto canvas and then follow the hand coloring when choosing the color of wool. The craft became popular and spread to England and the United States, and by the 1840s patterns were printed in women's magazines.

Designs were published in Paris and Vienna. Along with the geometric, floral, biblical and allegorical scenes, there were patterns based on popular Victorian paintings, such as "The Woodcutter." Landseer was born in London in 1802 to an artistic family. His father was the well-known engraver John Landseer. Early in his life, young Edwin was recognized as something of an artistic prodigy.

Landseer exhibited at the prestigious British Royal Academy of Arts in 1815 when he was just 13 years old. Landseer was elected an associate of the Academy at age 24 and in 1831 became a full academician at 29.

Landseer was a sculptor and a painter with a concentration on the representation of animals such as dogs, horses, stags, big cats such as lions and birds of prey. But while he is most famous as an animalier, he also did portraits and genre scenes. His most famous works are actually the four bronze lions that adorn the base of Admiral Nelson's Monument in Trafalgar Square in London.

Landseer's other iconic images are perhaps "The Monarch of the Glen," which shows an antlered stag standing majestically in front of Scottish mountains, and "Alpine Mastiffs Reanimating a Distressed Traveler," which is thought to be the origin of the myth of the St. Bernard dogs with casts of brandy around their necks rescuing stranded mountain trekkers.

A year before his death in 1873, Landseer's family had him declared insane, but when he died, England mourned. Flags were flown at half-staff, homes and shops lowered their blinds, and the lions at the base of Nelson's monument were draped with wreaths. Landseer was buried in St. Paul's Cathedral.

Today's tastes do not encompass needlework pictures such as this because they do not complement modern decor. To be sure, we have found retail examples priced in the $1,500 range, but at auction, we feel a Berlin work depicting a sentimental/romantic Victorian painting such as this one might bring only about $350 or even a bit less.