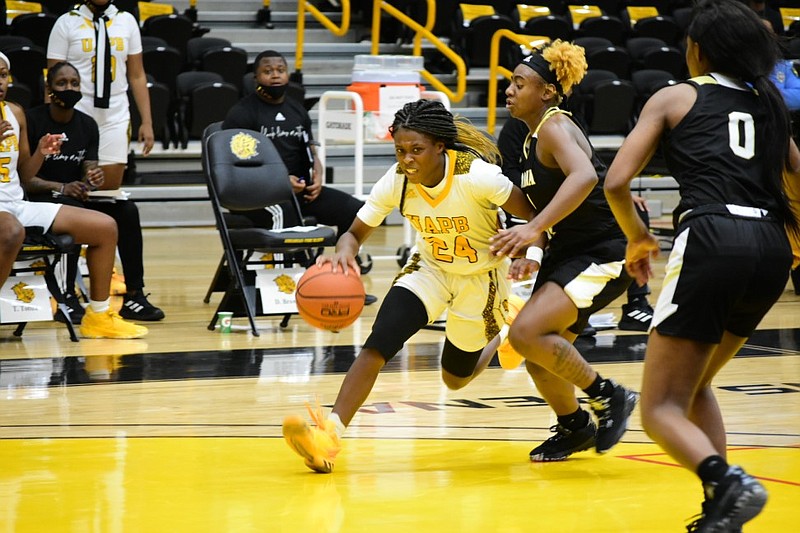 Kaila Walker of the University of Arkansas-Pine Bluff drives to the basket against Dakiyah Sanders of Alabama State in the fourth quarter on Saturday, Jan. 9, 2021, in Pine Bluff. (Pine Bluff Commercial / I.C. Murrell )

A 21-1 rally for the University of Arkansas-Pine Bluff’s women’s basketball team into the third quarter lasted a while, but the resulting short lead didn’t last very long.

Alabama State shot 53.6 percent from the floor and held the host Lady Lions to 30.7 percent Saturday on their way to an 87-79 victory inside H.O. Clemmons Arena in Pine Bluff. This was only the second game of the season for Alabama State (2-0, 2-0 Southwestern Athletic Conference).

“We knew we had to do something, and we were encouraging each other,” said guard Kaila Walker, who led UAPB with 20 points. “We had to come on and pick it up because we didn’t want to lose. We want to be the best in the SWAC, so we had to pick it up. So, we hyped each other up and gave each other confidence to get this game back.”

Alabama State led by as much as 41-26 in the second quarter, but the Lady Lions took advantage of defensive stops and built a lead of as much as 47-42 in the third quarter.

“One thing we always talk about is our defense is our best offense,” UAPB coach Dawn Brown said. “I definitely had the right mix in at the right time to defensively go and make a run. Jahnay Anderson (9 points) hit back-to-back big 3s for us, so she’s a shooter.”

Anderson, a redshirt junior, played her third straight game after a knee operation.

Shmya Ward added 20 points and Jayla Crawford 14 for the Hornets.

Walker, a sophomore transfer from Arkansas Baptist College, shot 12 for 13 from the foul line and playing 39 minutes. Khadijah Brown added 19 points and 13 rebounds in 20 minutes, and Jazzeem Bethea added 10 points and three steals.

Though they were outrebounded 44-41, UAPB (2-6, 1-1) stayed in contention by controlling the offensive glass, 24-11. The Lady Lions also got plenty of help from their bench, which outscored the Hornets’ 30-17.

Alabama State expanded its lead to 81-68 late in the fourth quarter, but Brown went on a personal 8-0 run to keep UAPB in the game. Walker finished a 3-point play to put UAPB within reach with 34 seconds remaining, but then the Hornets hit 4 of 4 at the line to close out the win.

UAPB junior guard Mariquita Cotton went down with an ankle sprain in the fourth quarter. Brown said Cotton “will be fine,” but the injury will force her to miss Monday’s game against Alabama A&M.

The Lady Lions already lost senior guard Joyce Kennerson, once the nation’s leading scorer while at Texas Southern, to a season-ending injury. Brown said Kennerson has opted to return for another season.

UAPB is scheduled to host Alabama A&M at 4 p.m. Monday. The men’s game has been postponed due to quarantines within A&M’s program.