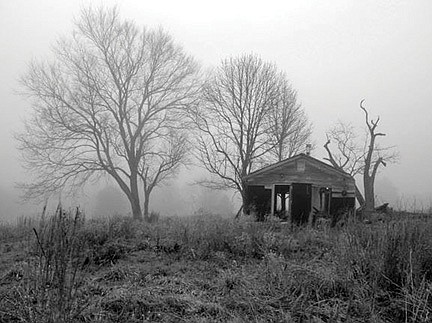 “Old House in Fog,” a photograph by Lynn Reinbolt of Searcy, received a purchase award in the 2021 Small Works on Paper Touring Exhibit.

Lynn Reinbolt of Searcy, Sandra Marson of Jacksonville and Ian Scott Campbell of Batesville are among the 26 artists with works in the show, which opened Jan. 5 at East Arkansas Community College in Forrest City. A virtual grand opening will take place at 7 p.m. Friday on the Arkansas Arts Council’s Facebook page and YouTube channel.

This year’s entries were juried by Judy Ledgerwood, a professional artist and recently retired professor in the arts from the department of art theory and practice at Northwestern University in Evanston, Illinois. She reviewed approximately 200 submitted artworks to select the 38 pieces that are part of the Small Works on Paper exhibition. She also selected works to receive purchase awards, which are cash prizes equivalent to the value of the artworks. Purchase-award pieces become part of the Small Works on Paper permanent collection.

Reinbolt’s work in the exhibit, a photograph he titled “Old House in Fog,” received one of the purchase awards. His works have appeared in four previous SWOP exhibits.

Originally from Chicago, Reinbolt specializes in photography. He said that when he was a child, his mother gave him an autographed book of photography by Ansel Adams.

“I immediately fell in love with landscape photography,” Reinbolt said. “I have been hooked ever since.

“This is the first time I have had an image chosen as a recipient of a purchase award [in this show]. It is an honor. I am humbled when I look at the other pieces in the show, gratified that some of my work is included with these talented artists.”

Reinbolt, who is a member of the Arkansas Arts Council’s Arkansas Artist Registry, will be among the artists speaking during the virtual grand opening on Friday.

“I will be talking about my photo ‘Old House in Fog.’ I enjoy making images on foggy mornings just after first light. There is always something mesmerizing during these times. It is very quiet; you feel so alone and distant,” Reinbolt said.

“As I came upon this scene, I looked at the house and was able to see through it, to the tree in the background. I could hear the stories of the people who had lived there, raised their families there and even died there,” he said.

“As I walk the Ozarks, I see many old houses, often in the middle of nowhere,” Reinbolt said. “Forgotten, abandoned and now empty, all of these old homesteads keep the stories of those who lived their lives there. Joys and sorrows, victories and defeats — it is their stories, and the houses are the library.

“It has been said, ‘If these walls could talk.’ When you slow down, stand there and listen — they do.”

Reinbolt is a graduate of Chicago State University with a degree in psychology. He is the former president of Road Systems Inc. in Searcy and is an active volunteer in the community. His photography has been featured in several galleries and exhibitions.

Marson has two watercolor collages in this year’s exhibition: “Girl in Orange” and “Explore Art.”

“In August, I was notified that I had two paintings accepted into SWOP for 2021,” Marson said. “I was shocked and honored. This is my first time to be accepted into the prestigious show.

“My painting ‘Explore’ is an experimental work using dress patterns for texture and torn pieces of watercolors to create a collage. The ‘Girl in Orange’ is also a collage. I used papers from magazines, rice papers and painted over the work with watercolors. The focal point of the painting is the girl in orange.”

Marson said she had a great year in the arts, despite the coronavirus.

“I was chosen to show in the Mid-Southern Watercolorists 50th Anniversary Show in The Galleries at Library Square,” she said. “My painting ‘Study in Texture #8’ was on exhibit from March until July 27, 2020. The opening was canceled, and the gallery closed. It later opened with limited hours.”

Marson said the Arkansas League of Artists’ Member Show was also at the Galleries this year.

“I received first place for my painting ‘Rhythm in Hue #11’ in the abstract division,” she said.

Marson said that in February 2020, “Niki Jones, who oversees the East Arkansas Community College Fine Arts Center, invited me to do a show in their gallery.

“By September, the gallery was not opening, but I hung my show of 31 abstracts. Niki made a video of the show and posted it on You-Tube under the EACC website.”

Marson said she is still exhibiting at the North Central Arkansas Art League at the Fairfield Bay Convention and Visitor Center.

A native of Jacksonville, Marson graduated from Jacksonville High School and immediately started a career with First Electric Cooperative in Jacksonville. She retired in 2008 after a 36-year career with the utility, retiring as a senior distribution designer.

Marson is a Diamond Signature member of Mid-Southern Watercolorists. She is also a member of the North Central Arkansas Artists League, the Arkansas League of Artists, the Arkansas Arts Council’s Artist Registry and the International Society of Experimental Artists.

Campbell also has two pieces of work in the show — both samples of his infrared photography: “Plate 66. Ivory-billed Woodpecker” and ‘Plate 185. Bachman’s Warbler.”

“The two pieces I have in the SWOP show are both from my After Birds series,” said Campbell, who is an assistant professor of art at Lyon College in Batesville.

“Each of my photos in this exhibition documents the habitat of an extinct species of bird that once lived in Arkansas: Bachman’s warbler and the ivory-billed woodpecker, respectively,” he said.

“Around the turn of the century, Bachman’s warblers could easily be found nesting along the St. Francis River

east of Paragould but are now extinct, most likely as a result of habitat loss. I spent a day kayaking around on the St. Francis and made a photo that borrows its composition from John James Audubon’s illustration of a Bachman’s warbler,” Campbell said.

“The ivory-billed woodpecker has been presumed extinct for decades, but many hold out hope that it may still be out there in the hardwood bottomlands of the Delta. In fact, several experienced birders reported seeing one in the Cache River Wildlife Refuge in 2004, launching an extensive bird hunt over the next few years. I took my photo along the Apple Lake Birding Trail in the Sheffield Nelson Dagmar [Wildlife Management Area], near the last reported sighting of the ivory-bill,” Campbell said.

“Both photos were made using a digital camera modified to capture infrared light — a part of the spectrum invisible to the human eye,” he said. “This is my first time showing in the SWOP exhibition, so I’m thrilled to have my work traveling around Arkansas.

“It’s always a great show, and the fact that it travels so far is a great way to reach a much wider audience.”

Campbell said five other pieces from his After Birds series have been selected by juror Efrem Zelony-Mindell for the upcoming Alternatives Photo Biennial at Ohio University.

A native of Kansas City, Missouri, Campbell has served on the board of directors for the Batesville Area Arts Council and is a member of the Arkansas Arts Council’s Arkansas Artist Registry, the Society for Photographic Education and the National Speleological Society.

“We are excited to be able to recognize the wonderful and diverse talent of visual artists throughout Arkansas,” said Stacy Hurst, secretary for the Arkansas Department of Parks, Heritage and Tourism.

“Small Works on Paper showcases artists from every corner of our state and gives art lovers the opportunity to discover emerging artists and experience one-of-a-kind artworks they may otherwise never have seen,” Hurst said.

“The 2021 Small Works on Paper will be an experience no Arkansan will want to miss,” said Patrick Ralston, Arkansas Arts Council director. “In 2020, Arkansas artists submitted an array of works that capture the emotions, hopes and fears of 2020.

“Artists are a vital resource for Arkansas, and they are an important component of our state’s vision, heritage, culture and economy.”

The 2021 Small Works on Paper touring exhibition will remain on display at EACC in Forrest City through Jan. 28. Gallery hours are 10 a.m. to 4 p.m. Monday through Friday. There is no admission charge, and the public is invited.

The exhibition will be on display at the Batesville Area Arts Council’s Gallery on Main, 226 E. Main St., in February. The show opens Feb. 2, and the gallery’s hours are 10 a.m. to 4 p.m. Tuesday through Friday and 10 a.m. to 2 p.m. Saturdays. The show will remain on display in Batesville through Feb. 27.

Additional locations for the traveling exhibit include the Delta Cultural Center in Helena in March; the Community Creative Center in Fayetteville in April; the Alma Performing Arts Center in Alma in May; Hendrix College in Conway in June; The Arts Center of the Grand Prairie in Stuttgart, July to mid-August; the University of Arkansas at Little Rock, mid-August through September; Arkansas Tech University in Russellville in October; and Henderson State University in Arkadelphia in November.

For more information on the Small Works on Paper touring exhibition, visit arkansasarts.org or call (501) 324-9150.