OPINION | CRITICAL MASS: A diminished chord — The story of the Bee Gees 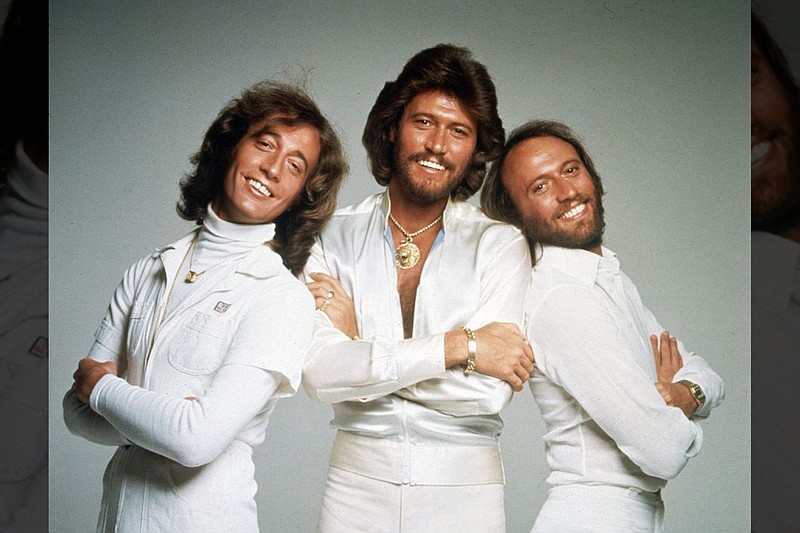 Robin, Barry and Maurice Gibb, aka the Bee Gees, in 1977. (Special to the Democrat-Gazette/HBO)

It's an A minor chord that sounds slightly out of tune and thinly metallic. It's a primitive, janky sound voiced in open D tuning, played on four strings fretted up the neck. The easy-play guitar chord books will usually diagram it as a simple open A minor in standard tuning. That's good enough for campfires and talent shows, but misses by a spooky fraction, by the distance between competence and glory.

In an interview 20 years ago, Maurice Gibb told Mojo magazine there were two guitars playing the chord, that he was playing it in standard tuning (presumably as a barre chord on the fifth fret) and that his older brother Barry, who had written the song with his other brother, Maurice's twin Robin, was playing the open D variant. (Barry had learned to play in open D when he was 9 years old; a neighbor who played Hawaiian slack key-style guitar had showed it to him.)

Maurice's testimony notwithstanding, I'm not sure I hear two guitars, but then when Barry and Robin start singing in unison (in the chorus Barry will drift to the lower harmony notes, Robin would overdub a high harmony) at the back end of the fourth second, you really can't be sure you're hearing more than one voice either.

"In the event of something happening to me ...."

This is where the Bee Gees begin for some of us, though some might go back to "Spicks and Specks" or caught on in the later mid-'70s when the band was both a commercial inevitability and a laughing stock. (Maybe we all get the Bee Gees we deserve.)

The song is called "New York Mining Disaster 1941," about a doomed miner showing his colleague Mr. Jones a photograph of his wife and wondering if they will be rescued. I'll always believe the title is something of an homage to/goof on Woody Guthrie, though the official story is that Barry and Robin wrote it in a darkened hallway of Polydor Records during a power cut, and that if it referred to anything it was the 1966 Aberfan mining disaster in Wales in which a coillery spoil tip — shale and sandstone and other worthless rocks excavated from a coal mine — slid down a mountain and engulfed part of a town, including a school, killing 116 children and 28 adults.

The brothers placed their imaginary mining disaster in New York because it sounded more glamorous, and 1941 sounded better than 1939, which was when, Robin thought, there might have actually been a mining disaster in New York, though I couldn't find mention of it. But does it matter, given that "New York Mining Disaster 1941" is one of those rare pop songs in which the title never appears in the lyrics.

Famously, the record company distributed promo copies of the record to radio stations with a blank label, allowing only that the group's name began with a B. Some of the labels came with the letters B and G scribbled on. This led to speculation that the track was a clandestine Beatles' project. B.G. stood for Beatles Group. And it sounded like it could have been the Beatles, like a lot of records did in the '60s.

Even so, the track only did moderately well by what would become the Bee Gees' standards. It hit No. 12 on the U.K. charts, No. 14 on the Billboard Hot 100. It got to No. 2 in South Africa. It was the first of 30-something hits for the band and Bee Gee adjacent acts, which included their younger brother Andy, who was born in 1958. It's one of the weirdest records to ever infiltrate the Top 40.

But it wasn't really the beginning. 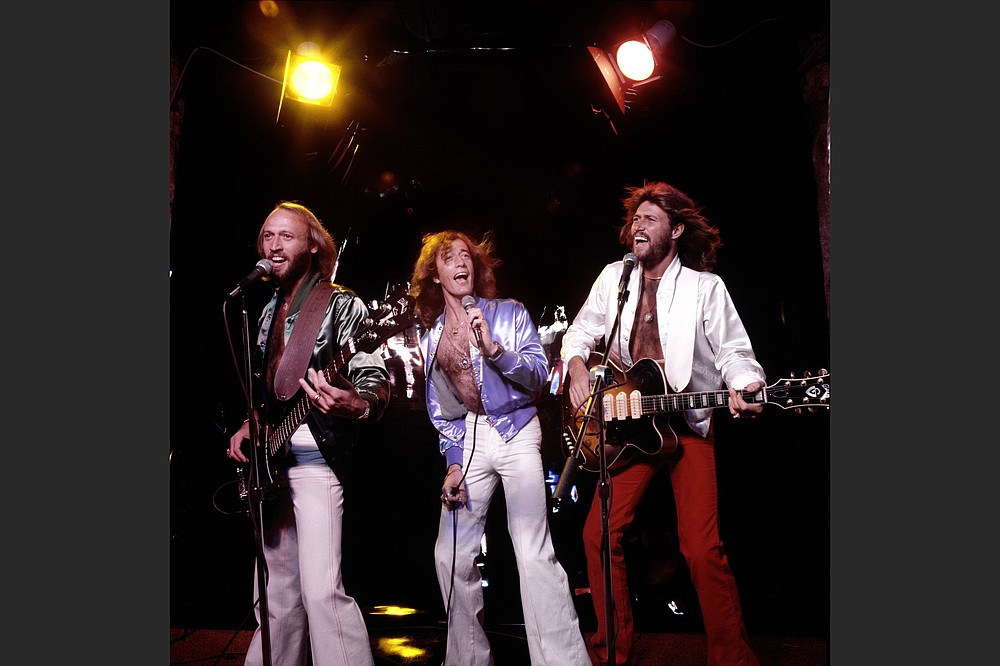 The Bee Gees — brothers Maurice, Robin and Barry Gibb — perform in 1979. (Special to the Democrat-Gazette/HBO)

"How Can You Mend a Broken Heart," veteran Hollywood producer Frank Marshall's ("Raiders of the Lost Ark," "Back to the Future") loving look at the band's rise, slide and retrenchment as a cultural inevitability that's now streaming on HBO Max, necessarily leaves out a lot.

There's nothing in it about the ill-fated "Sgt. Pepper's Lonely Hearts Club Band" movie that starred the Brothers Gibb as members of the title band (they were joined by Peter Frampton as Billy Shears).

There's very little about the late '60s version of the band that carried on after Robin briefly left — for a short time sister Lesley stepped in for Robin — recording the 1970 album "Cucumber Castle," which was named for a track on 1967's "Bee Gees' 1st" (which itself wasn't the band's first album but its third, after 1965's "The Bee Gees Sing and Play 14 Barry Gibb Songs," credited to Barry Gibb and the Bee Gees) and 1966's "Spicks and Specks."

There's no mention of the Bee Gees' precursors, such as the Rattlesnakes, a skiffle band Barry, Robin and Maurice formed in England before they moved to Australia in the mid-1950s, where they enjoyed regional success as a juvenile act that wrote and performed original songs. (When Robin was told there was a rumor that John Lennon and Paul McCartney had ghostwritten "New York Mining Disaster," he scoffed that he'd been writing songs since before Lennon and McCartney had picked up instruments.)

There's also no mention of another rumor: that the Gibbs' move to Australia was hastened by Robin's proclivity for arson. ("I was a bit of a firebug," Robin admitted to the U.K. newspaper The Independent years later.)

They came back to England in early 1967 after their father, Hugh — a dance-band drummer who served as their de facto manager in the early years — shopped them to various labels, eventually connecting with Robert Stigwood, an Australian who managed supergroup Cream and had recently engineered a short-lived merger of his operation into the Beatles' manager Brian Epstein's NEMS (originally "North End Music Stores") Enterprises.

Stigwood signed the band to a five-year contract in February 1967 (when Barry was 20 years old and Maurice and Robin were 17) and got them a recording contract with Polydor in Europe and the Atlantic subsidiary Atco in the United States. He cannily conceived the aforementioned "white label" strategy to promote "New York Mining Disaster" (and, in a 3-D chess move, made a point of mailing those unidentified promo records from the NEMS office).

One thing that Marshall does stress is that from the beginning, the Bee Gees were a real band, not a vocal trio. (Technically, Bee Gees doesn't stand for "Brothers Gibb," as is generally assumed. Australian disc jockey Bill Gates coined the name for the group after he heard 13-year-old Barry and his 9-year-old brothers singing between races at a speedway. Gates went by his initials on the air, and he noted that Barry, Barry's mother Barbara, and Bill Goode, a promoter who worked with the band, all shared the same initials. Hence the room was full of BGs. Gates' alternate name for the group was "the Little Bastards.")

Fellow Australian expatriates in London Colin Peterson — who had gone to school with Barry — and Vincent Melouney were recruited on drums and lead guitar respectively, but all the brothers played on sessions. Maurice, who would eventually become the band's musical director, was most associated with bass, but he also played guitar and keyboards, while Robin played keyboards (mainly organ and Mellotron) on the Bee Gees' records (on his solo work he sometimes also played acoustic guitar).

For the next two years, four albums and half a dozen hits, the Bee Gees were a quintet. Melouney left in 1968, in part because he wanted to front his own band. In 1969, after they released their most ambitious album, the double record "Odessa" (a country-tinged progressive rock concept album inspired in part by Sergei Eisenstein's 1925 silent film "The Battleship Potemkin"), Robin left the band. He thought Stigwood favored Barry-sung songs over the ones on which he sang lead. He wasn't yet 21 years old. 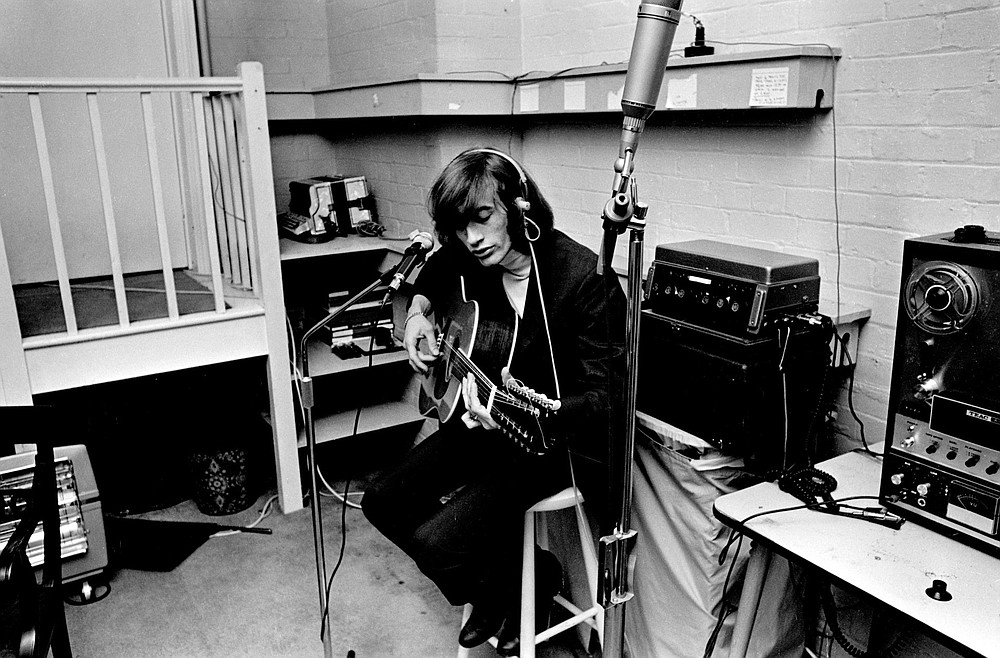 Robin Gibb, of Bee Gees fame, plays his 12-string in 1969 during his brief solo career. (Special to the Democrat-Gazette/HBO)

The Bee Gees' spell was broken — for a while.

Peterson left, or was fired, soon after the "Cucumber Castle" sessions, and Barry and Maurice decided to take on solo projects. Both recorded solo albums that were never released; Maurice took the lead in a West End musical. Then he and Robin began to work together again, with Barry eventually joining them. The singles "Lonely Days" and "How Can You Mend a Broken Heart?" were reportedly written during their first reunion session.

Aside from these two singles, there seemed little interest in the band. A string of albums from 1970's "2 Years On" through 1974's "Mr. Natural" failed to generate much attention (the nadir was probably 1972's "To Whom It May Concern," though that melancholy record is redeemed by the presence of "Run to Me," which was the band's first Top 10 single in the U.K. in three years).

Then, the deluge — which is really where Marshall's film begins.

The Bee Gees, at the suggestion of Eric Clapton, moved to Miami, continued to work with Arif Mardin, the producer they'd worked with on "Mr. Natural," and began to turn away from lyrically intricate balladry to beat-driven soul music. ("I thought those guys were an R&B band who hadn't worked that out yet," Clapton says in the doc.)

The bumpy drive over the bridge that took them to Criteria Recording Studio inspired "Jive Talkin'." Looking for an effective outro to their next single, "Nights on Broadway," Barry ad-libbed a falsetto counter-melody.

"My whole life, I didn't know I could do this," he says in the film.

Then Stigwood became involved with the production of the film "Saturday Night Fever." When it seemed it might be problematic getting clearances for some of the Boz Scaggs and Stevie Wonder tunes that had been used in the movie's dance sequences, he commissioned the Bee Gees to create music for the film.

With no conception of what the movie was about, the Gibbs wrote the songs "If I Can't Have You" (which would be recorded by Yvonne Elliman for the soundtrack disc), "Night Fever" and "More Than a Woman" "virtually in a single weekend" at Château d'Hérouville studio in France. After they played a demo for Stigwood and music supervisor Bill Oakes, they were asked for a more "disco-ey" track — and wrote "Stayin' Alive."

In 1978, the Bee Gees accounted for 2% of the entire music industry's revenue.

Naturally, they were due for a backlash.

Marshall's movie focuses on Chicago DJ Steve Dahl and his "Disco Sucks" campaign, which culminated in "Disco Demolition Night" at Comiskey Park in July 1979. Between games of a White Sox double-header, records brought to the stadium by fans were stacked in a crate in the outfield and exploded.

"It was a book-burning," Vince Lawrence, the house music pioneer who was working as an usher at Comiskey that day, remembers. "A racist, homophobic book-burning."

The Gibbs were all but forced from the spotlight; for the first time they traveled with bodyguards. The FBI kept watch over them. They lowered their profiles. They — especially Barry — kept writing songs and producing music, but mostly for other people.

The movie is framed by Barry, looking back in wonder over his life. His brothers are gone. Andy, the youngest, died in 1988, his heart weakened by years of drug abuse. He had just become an official Bee Gee. Maurice died unexpectedly in 2003; Robin died in 2012, having concealed his cancer.

Barry is disconsolate and philosophical. "Nothing is true," he says in voice-over. "It is all down to perception."