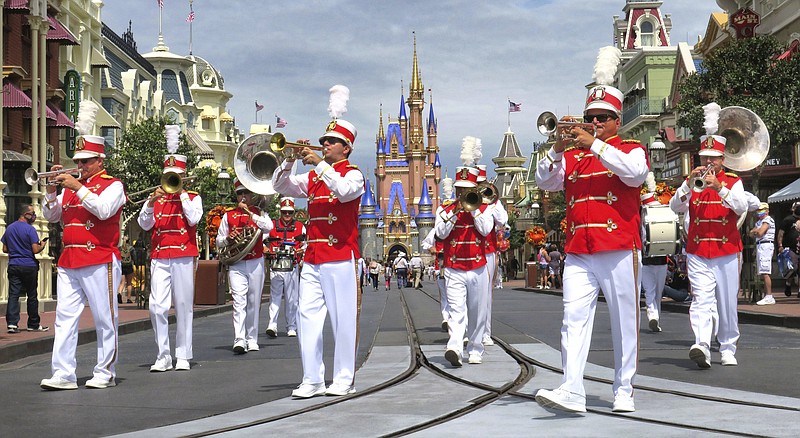 The Main Street Philharmonic marching band performs in the Magic Kingdom at Walt Disney World. Disney will mark the 50th anniversary of the Florida resort on Oct. 1, but visitors should expect pandemic-driven changes. (Democrat-Gazette file photo)

Back in 2017 — practically ancient history by today's standards — Disney announced big plans for 2021, the 50th anniversary of the opening of Walt Disney World in Florida.

"For a milestone that big, it's never too early to start planning ... especially when you're planning something huge!" the announcement said, highlighting new roller coasters at the Epcot and Magic Kingdom theme parks.

Not even the coronavirus can delay an anniversary, but those big plans have shrunk as the pandemic forced the company to reduce crowd sizes, add new safety measures, pause construction and — in the case of Disneyland in California — remain mostly closed indefinitely.

Jessica Sanders, who runs the Disneyland planning site the Happiest Blog on Earth, said she wouldn't make plans to visit the California parks before the summer, "unless you're willing to change those plans." And even once those parks open, she said, the experience will be vastly different from before, with limited crowds, safety measures including masks and social distancing, and scaled-back offerings.

"For someone that's looking for a full theme park experience, it's going to be past 2021," she said.

There's still much uncertainty about when the California parks will open and when new rides will debut this year, but here's what the company has said will be new (or returning after going away) this year:

Despite all the changes, Disney will mark the 50th anniversary of the Florida resort on Oct. 1. Typically, the company stretches anniversary celebrations out over long stretches of time, though no plans have been announced yet.

Jana Hornsby, general manager of South Carolina-based Discover the Magic Vacations, said clients are still eager to be there for the milestone date.

"When we're making new reservations now, we really have to be careful with availability," she said. "Because once that ability to make reservations for that time period opened up, we had Disney fanatics flocking to be there."

As for those big 2021 plans that were announced in 2017? That timing appears to be up in the air. They include Guardians of the Galaxy: Cosmic Rewind, a roller coaster at Epcot; a Tron roller coaster at the Magic Kingdom; and Star Wars: Galactic Starcruiser, an immersive two-night experience aboard a "starship" hotel.

When Walt Disney World Resort reopened last year, one of the new restrictions was that visitors could not go to more than one park per day — a feature that many guests pay extra for. The company reinstated park hopping on Jan. 1, though guests still need a reservation for the first park they visit and can only switch to another one after 2 p.m.

One ride that was announced in 2017 and will definitely open this year is Remy's Ratatouille Adventure, based on the animated film, at the Epcot theme park. In the attraction, guests will take a "culinary adventure with Remy" across a French restaurant's kitchen floor.

Nighttime fireworks and light shows are on hold for now, but when they return, Epcot will introduce a new one: Harmonious, billed as "one of the largest nighttime spectaculars ever created for a Disney Park."

Bailee Abell, editor in chief of the Disney news site Inside the Magic, said fireworks and other shows are a big part of why people visit the parks, so the uncertainty around their return is causing some fans to postpone their visits.

"It's this kind of funky feeling, because we know it's coming and people are really excited about it," she said. "A lot of people are in the camp that they want to hold off and they don't want to book a trip until more shows come back, more parades come back."

The Disneyland ride Snow White's Scary Adventures has been "reimagined" with new scenes, story details and technology — and a new, less-scary name.