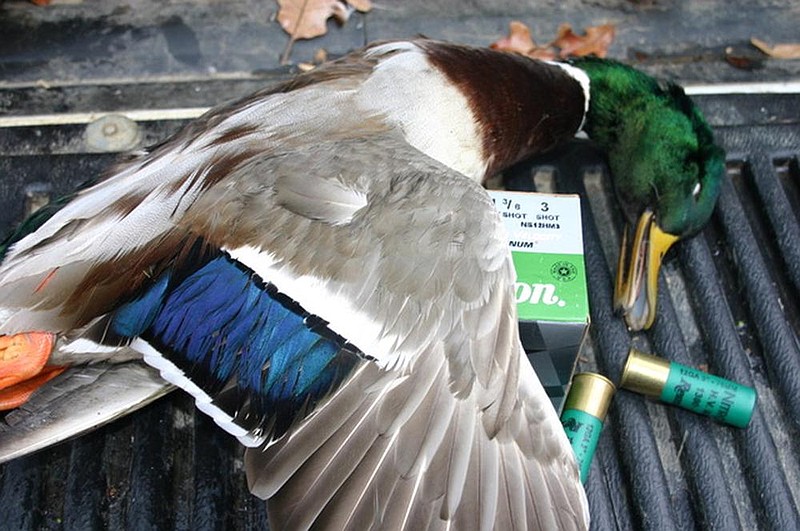 Lousy duck hunts of late have prompted the author to recall favorite duck hunts from the past. (Arkansas Democrat-Gazette/Bryan Hendricks)

Lack of good duck hunts lately have me reminiscing about great duck hunts from the past that keep me looking forward to the great hunts of the future.

One hunt in 1985 was not productive, but I remember it as my Independence Day.

I started duck hunting in 1971 with my dad, always at Bayou Meto Wildlife Management Area. I hunted only with him and my brother Brad. I followed Dad's orders, and I did it his way until one morning late in the 1984-85 season. I took John Healey, a classmate from the University of Arkansas at Little Rock, to Bayou Meto and parked at the first Long Bell Access, the only place I knew.

We walked a very long way. The sky was black with ducks that morning, and no other hunters were close. I felt so empowered to hunt without the "old man" running the show. That morning was the beginning of an outdoor life on my own.

From 1987-98, I didn't hunt ducks until I went to work as the public affairs officer for the Oklahoma Department of Wildlife Conservation.

Jay Hughes, a reporter for the Oklahoma City bureau of The Associated Press, invited me to hunt on New Year's Day 1999 with his colleague Owen Canfield, an AP sports reporter. Hughes, a Mississippi native, sorely missed green timber hunting in the South. Oklahoma hunting was a different game all together, but it was much easier than I expected.

Our destination was Fort Cobb Reservoir near Binger, Okla. We parked near a shallow cove on the lake and walked a short distance through a thin fringe of woods to a long point that was littered with downed trees and brush. We tossed a couple of dozen decoys into the cove and waited for ducks to arrive.

Vast peanut fields surrounded the lake, and the ducks rising from those fields were so numerous that they looked like smoke. Many came to the lake to rest, but instead of coming to the sheltered cove, they lit in the windswept open water off the end of the point. There was no need for decoys because it was obvious where the ducks wanted to be. We simply moved about 100 yards and hunkered down behind a couple of downed trees. We shot limits of mallards fairly quickly and even dropped a few Canada geese. The ducks we shot fell in the open water, but the wind blew them to shore. The geese fell in our laps.

It was an easy hunt before duck hunting became popular in Oklahoma. The memory of those billowing clouds of ducks rising off those peanut fields will stay with me forever.

In 2005, I went to work for the Missouri Department of Conservation and discovered Eagle Bluffs Conservation Area, a fantastic spot near Columbia. As with most Missouri duck hunting areas, you had to check in at Eagle Bluffs about 3 a.m. to draw for a spot. If you don't draw, you don't hunt.

I lived too far away to take that gamble. Instead, I found another spot directly across the Missouri River at Overton Bottoms Conservation Area. After the great floods of 1991 and 1993, the federal government bought out many riverfront landowners down a long stretch of the river and set the levees back one-quarter of a mile. The stretch north of Interstate 70 was designated a national wildlife refuge, and the MDC managed the section south of I-70 as a conservation area. This gave the Missouri River room to spread during floods, and it quickly became a wildlife paradise, especially for ducks and deer.

Best of all, I didn't have to draw to hunt there. In fact, very few people knew the place had any duck hunting opportunities.

The duck hunting spots were well hidden. In November 2001, I encountered a secluded scour hole that was surrounded by brush and freshly planted trees. I saw ducks landing at the far end of the pond, so I sneaked that direction. At the pace of cold 20W-50 motor oil oozing down ice, I slipped behind the brush looking and listening.

Finally I heard ducks chuckling. A few minutes later, I saw ripples spreading out from the bank where the ducks were feeding out of the wind. I proceeded until I reached the epicenter of the ripples. I burst through the brush to the pond edge and surprised more than 100 ducks. They took off with a roar, but I dropped two drakes and a hen with three shots. It was my first triple, but one of the drakes also was my first band. Later, I also killed two green-winged teal. That was the beginning of a rich history of hunting a world-class spot in virtual solitude.

In the fall, ephemeral sheetwater ponds formed about a mile in the interior. There were also some small ponds that attracted a lot of gadwalls, pintails and wigeons. One of those ponds taught me a hard lesson about sharing spots you worked so hard to find. I took a co-worker on a superb hunt. I was there alone one morning when I heard muffled voices approaching. The brush parted, and there appeared my co-worker with one of his friends. From then on I adopted a "Don't ask, don't tell" policy.

After one unproductive morning, I made the long trek back to the parking area. The final length of the path led through the brush like a tunnel. I was about 200 yards away when a Missouri wildlife officer's vehicle passed across the "keyhole." It backed up and stopped. The officer exited the truck and greeted me when I stepped into the parking lot.

"What's in the backpack?" he asked.

"Mind if I see them?" he asked. I opened the pack and extracted the decoys.

The officer pulled off his sunglasses, looked me in the eye and growled, "Where is there to hunt ducks around here?"

About a mile in the distance was a giant elm, the only big tree on the area. Its top was visible from where we stood. I pointed and said, "About three or four hundred yards past that tree waayyyyy over there."

He thought I was packing out an out-of-season deer.

My last hunt at Overton Bottoms was on Thanksgiving Day 2004. The day was bright, sunny and bitterly cold, and I had to search harder than usual to find open water.

A big flock of ducks fluttered down about 300 yards away. They dropped straight down with no hesitation. There was no approach cover, so after closing to a certain distance, I belly crawled through an expanse of cockleburs that practically stapled my forearms to my chest. My fingers went rigid and numb.

I reached the edge of the pond only to find it empty.

Puzzled, I glimpsed two mallards set their wings and plummet yet another 300 yards away. So commenced another long crawl.

Inching along on my belly, I spied water through the golden grass. A little closer, and I heard contented chuckles. Closer still, and I spied the broken forms of ducks swimming and bobbing. There were hundreds, and all kinds, but mostly mallards. I prepared for my first three-shot limit.

Still on my belly, I parted the grass and looked right into the eyes of a startled mallard drake no farther than three feet away.

"Surprise!" I screamed, lurching upright. My knees locked, and I struggled to get my numb, gloved finger into the shotgun's trigger ring. I fell on my back as a giant mass of ducks thundered skyward.

I staggered to my knees and got off three shots, but only one hen mallard fell. Despite comical execution, the actual hunt was my finest.