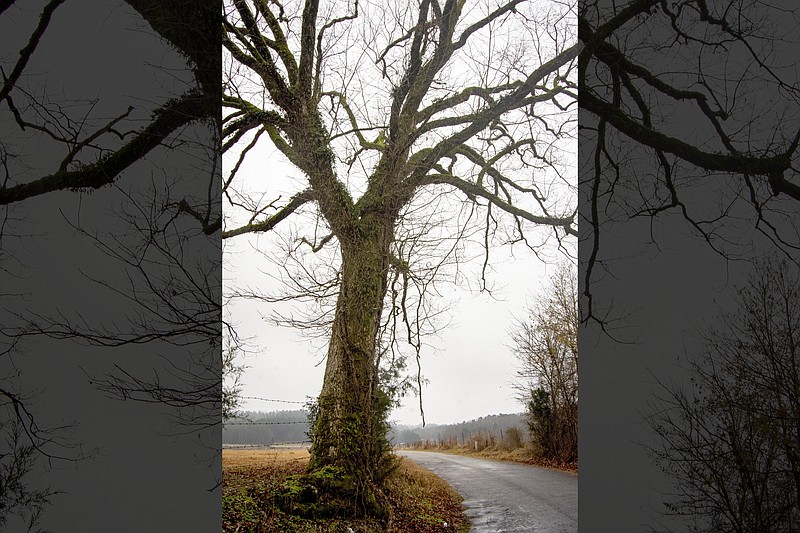 An old oak on a curve of Old Danville Road in Saline County. (Arkansas Democrat-Gazette/Cary Jenkins)

It's easy to dismiss winter as a time when Mother Nature bears no signs of life; a season whose most prominent markers are stark, leafless trees.

Look out on any tree-dominated winter landscape not covered with snow, and you'll note the web-like, almost feathery patterns in which the gnarled branches of those trees end as they etch themselves in sharp relief against what's likely a gray sky.

Some trees aren't totally bare; you may see mysterious clumps of greenery. Or, surely to your delight, you'll spy an abandoned nest or two. Look between those bare branches and you may find yourself marveling over things that are hidden during the months when the trees are clothed in their leafy finery: The architectural detail on a downtown office building. A winding country trail. Twinkling street lights. A long abandoned little cabin in the woods.

"Trees do not die during the winter; they just go into a form of hibernation called dormancy," according to the website gardenguides.com. "Since there is less sunlight in the winter and the tree can't produce as much food, trees must conserve their energy."

In other words, the trees may look dead, but they are only sleeping. And when we stop taking them for granted, we will see what sleeping beauties they are.