Pine Bluff's Bobby Rush recognized for his impact on blues 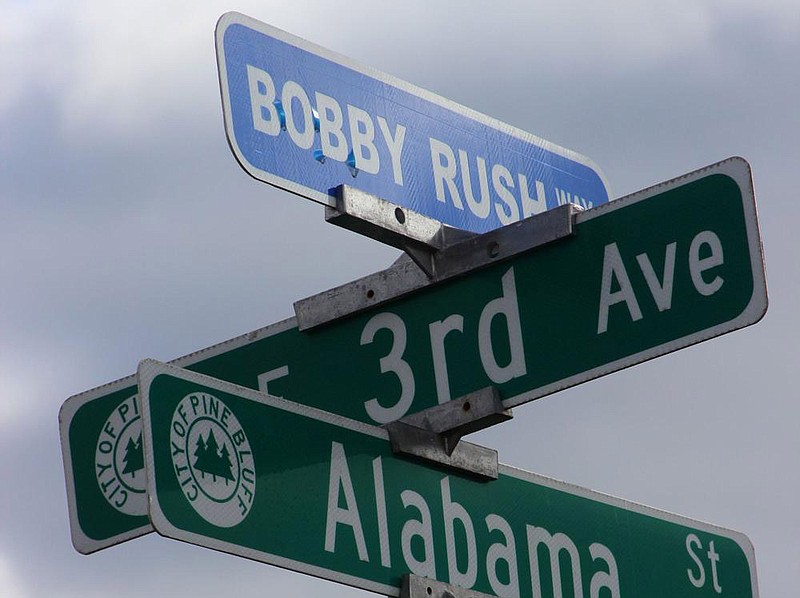 At the corner of Third Avenue and Alabama Street in downtown Pine Bluff, a new sign designates three blocks as “Bobby Rush Way.” The iconic, 87-year-old bluesman began his seven-decade career at Jittie Bugs juke joint formerly at that location. (Special to The Commercial/Richard Ledbetter)

On Nov. 30, 2018, the community gathered in the Pine Bluff Convention Center to honor a world-renowned native son. The gala event was sponsored by the Delta Rhythm and Bayous Alliance with the express purpose of designating three blocks of downtown Pine Bluff's Third Avenue as "Bobby Rush Way."

Event organizer Jimmy "Catfish" Cunningham is founder of the alliance.

"We're a nonprofit working to develop a travel corridor between Pine Bluff and the Greenville/Leland, Miss., area," Cunningham said. "We want to highlight the music, arts and geographical distinctions in what has now been named by the states of Arkansas and Mississippi as the Delta Rhythm & Bayous Highway along U.S. 65 and 82 between Pine Bluff and Greenville."

"One of the things we are doing is the development of an arts district in downtown Pine Bluff between Second and Fourth Avenues and Walnut and Alabama Street," he said. "Within those few blocks you had the Theatre District on Second Street. While Fourth played a major role as a transportation hub, Third Street had all the juke joints including The Gala Room, Eddie's Bar & Grill, The Green Door and Jittie Bugs."

"We want to highlight the folks who began their careers in Pine Bluff, and Bobby Rush is one of those as well as one of the last living Blues legends. It seems only fitting to rename Third Avenue for him since that's where Bobby began his professional career earning his first dollar as a blues man in Jittie Bugs," Cunningham said.

Rush made his bones over seven decades working the Southern "Chittlin' Circuit" and Northern Blues clubs. He and Buddy Guy are today's elder statesmen of the genre. Guy at 84 and Rush who turned 87 on Nov. 10 are the oldest continuously touring Blues artists still around.

Before covid, Rush and his band performed an average of 200 shows per year all across the U.S., Europe and Australia.

The long-awaited nod of respect is well deserved in light of all Rush has achieved including his first Gold record in 1971, 11 Blues Music Awards and Best Traditional Blues Grammy for 2017.

In a recent conversation, he said: "I started recording in 1951. 'Porcupine Meat,' which won the Grammy, is my 377th record. I was born Emmett Ellis Jr. in Homer, La., in 1933. My father was a Baptist preacher. We moved to Pine Bluff in 1947. When I started performing, I changed my stage name to Bobby Rush out of respect for father because religious folks frowned on the blues back then."

"When I was old enough to leave home, I went to Sun Records in Memphis. I met Muddy Waters, Howling Wolf and Rufus Thomas. I knew B.B. King from Beale Street in the early days and was fortunate to spend time with him in later years. I worked Beale Street alongside those cats to make enough money to go to East St. Louis where I met Chuck Berry in 1951. I went with him to Chicago where I met Otis Redding. In Chicago, I worked alongside Lowell Fulsom, Little Walter, Lonnie Johnson and Robert Lockwood."

The popular bluesman said, "My previous album, 'Sitting on Top of the Blues' won Traditional Blues Record of the Year."

Rush also wrote the entire soundtrack for Eddie Murphy's latest film, a remake of the classic "Dolomite is My Name." Rush appears in the movie performing a barroom scene in addition to having written and recorded all the music.

He added, "Netflix bought the film for $122 million. I own the master tapes so that paid pretty well."

Rush's latest LP dropped on Aug. 28. "Rawer Than Raw" is an acoustic tribute to the iconic blues greats of Mississippi that has just been nominated for the 63rd annual Grammy Awards.

The year 2020 proved a mix of highs and lows for Rush.

"I felt bad the day before Valentine's. I was in Chicago and had a headache, but it went away. By the 29th, I was in Nashville and got really sick. I was back home in Jackson, Miss., by March 1 with a bad chill. I couldn't get warm for four days. My son took me to the hospital. They didn't have any covid tests yet, but I had all the symptoms. I felt weak, ran a 105-degree temperature and no appetite."

Rush said medical staff didn't have proper covid protocol in place at the time and were likely scared to be around him.

"They gave me a shot, then put me in a room and left me for five hours. Someone came and looked in on me once -- maybe to see if I was still alive. Then I lay there alone for another five hours until they came in after midnight in protective suits. I'm an over-80 Black man so they probably expected to put me on the vent by then. But I never had respiratory problems."

When the staff finally did get some testing equipment, Rush said, they swabbed his throat but not his nose.

"I now understand [that] is important for accuracy," he said. "After two days in the hospital, they got my temperature down and sent me home. I never heard my test results for two weeks, so my people got ahold of the hospital asking for the report but it was another week and a half before I was finally told it came back negative. Based on my symptoms, I feel that was incorrect."

Rush said he had vivid dreams and lost track of time.

"I told my son I'd been lying in bed for two days," Rush said. "He said, 'Daddy, you been here for five days.' After three and a half weeks, I was feeling much better. I never set foot outside my door for seven and a half weeks. I went from 180 pounds down to 150."

But since his illness Rush said, "I eat everything you put in front of me now. I'll eat the bark off a tree!"

In reference to his band, he said, "We haven't worked in months, so it's tough on everyone in the entertainment business."

Expressing his gratitude, Rush concluded, "Thank you all for the love, prayers and concern. God has brought me through this journey of sickness, and I'm feeling really good now." 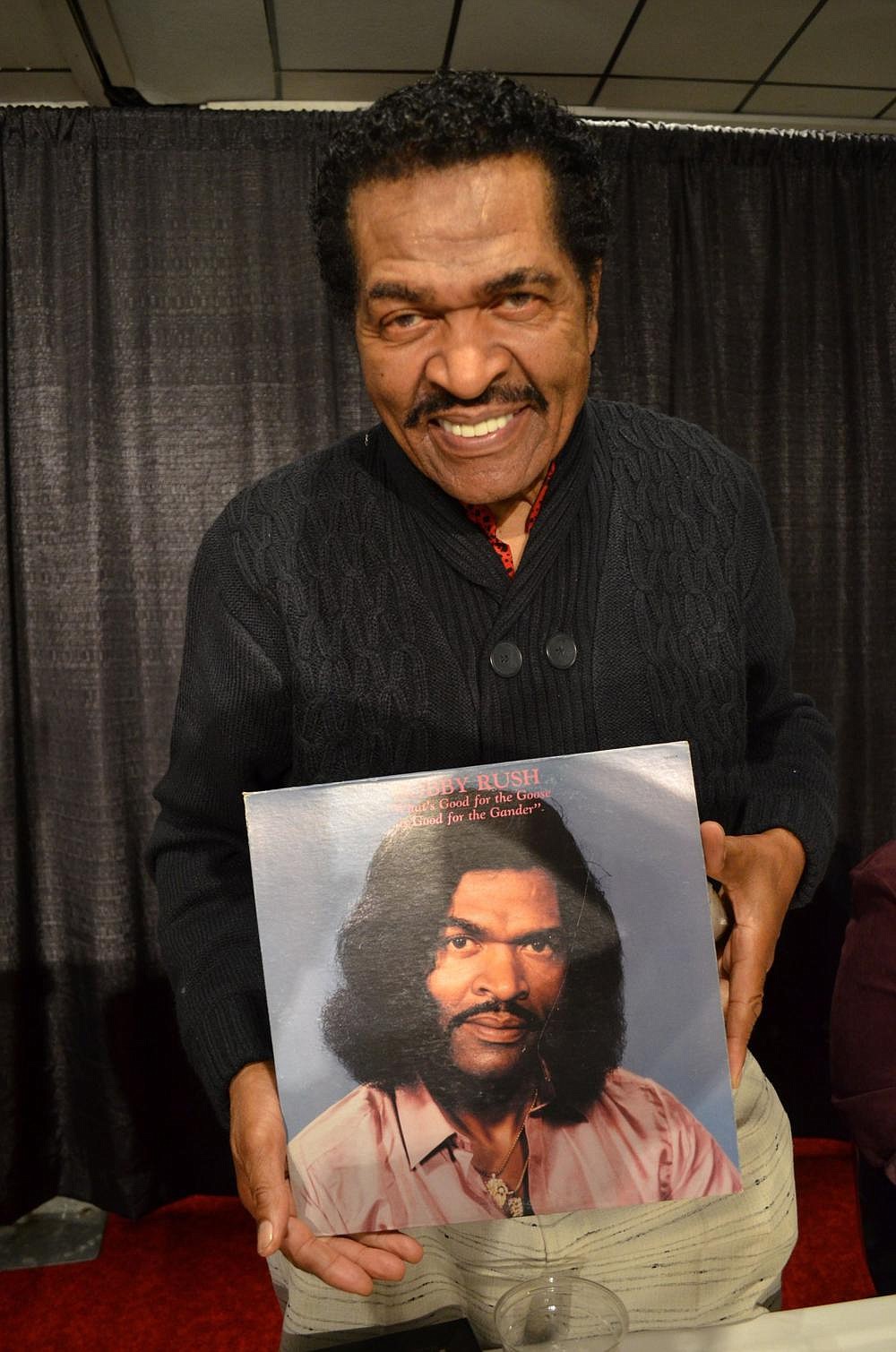 Blues artist Bobby Rush holds a copy of his 1985 LP on Nov. 30, 2018, at the Pine Bluff Convention Center where he received a lifetime achievement award. (Special to The Commercial/Richard Ledbetter)
ADVERTISEMENT