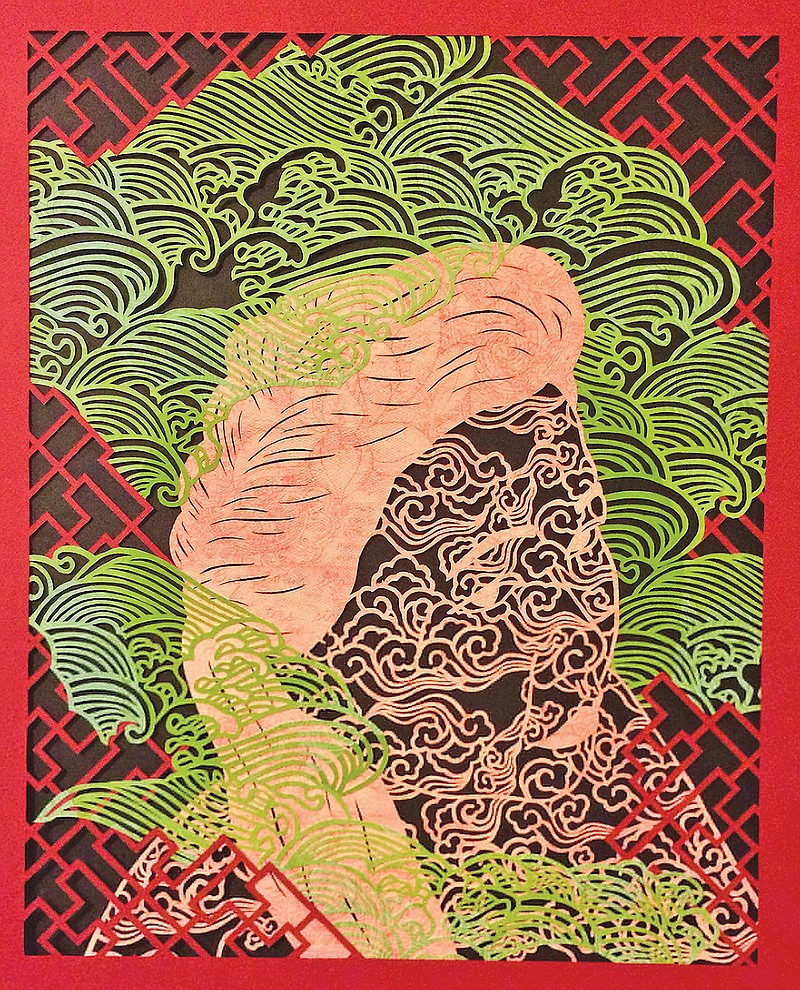 “Undulation,” an intaglio print and cut-paper work by Tammy Harrington of Russellville

Neal Harrington and his wife, Tammy Harrington, both of Russellville; Dennis McCann of Maumelle; and David Rackley of Russellville are among 26 artists with works in the show, which opened Jan. 5 at East Arkansas Community College in Forrest City. A virtual grand opening will take place at

This year’s entries were juried by Judy Ledgerwood, a professional artist and a recently retired professor from the arts department of art theory and practice at Northwestern University in Evanston, Illinois. She reviewed approximately 200 submitted artworks to select the 38 pieces that are part of the exhibition. She also selected works to receive purchase awards, which are cash prizes equivalent to the value of the artworks. Purchase-award pieces become part of the SWOP permanent collection.

“Neal has shown in SWOP four times prior to this year, and I have been in SWOP three times prior,” said Tammy Harrington, who is a printmaker and paper-cut artist. “We were accepted in the same year only one other time — 2014. It is a great honor to be accepted into this Arkansas art tradition.

“I am always excited when either Neal or I get accepted into a juried exhibition. You would think that as artists we would be competitive with each other when it comes to exhibitions or other professional opportunities, but I am just as happy if Neal is recognized, even if I am not. Art-making is a passion, and it takes a lot of work and a little bit of luck to be successful. We support and encourage each other. I am the biggest Neal Harrington fan. It is the best when we both get in.”

Tammy is a professor of art at University of the Ozarks in Clarksville.

“It’s been a tough year. As an educator, I have had to stretch my boundaries with my teaching methods. With all that has been going on in the world, it’s been more challenging to keep up with making art,” she said.

“I finally feel more settled and look forward to cutting on paper. I have a two-person show coming up at the Argenta Gallery [in North Little Rock] this April. My artwork is influenced by the Chinese folk art of paper cut,” Tammy said. “The crisp graphic appearance of paper cut appeals to my sensibility as a printmaker. My work is a blending of my interpretations of traditional Chinese designs into personalized figurative compositions.

“Initially in my print work, the paper-cut designs appeared as textures and patterns that melded with the figure. I took the next step and actually cut into the paper and printed surface. The combination of the paper cut with other media shifts the idea of space to be both dimensional and flat. The use of pattern, printed and cut out, depicts the figure as it exists in an ephemeral state, in a place between reality and the mystical. The delicate lines combine with bold shapes and color to create visual movement and vibration.”

She serves as president of the Arkansas Society of Printmakers and is on the board of the Arkansas Committee of the National Museum of Women in the Arts. She was awarded the 2017 Beaux Arts Award from the River Valley Arts Center.

The Harringtons moved to Russellville in 2001, when Neal accepted a position at Arkansas Tech University, where he is now a professor of art and director of the Norman Hall Gallery.

“The subject matter of ‘SPRUNG’ is a commentary on a self-portrait. … It is one of humor caused by pain told visually through a surrealistic image,” Neal said.

“Teaching, parenting, art making and life in general lead to a feeling of overwhelming thoughts. … The result is my inner avatar springing out of my head, bringing the medicinal jug of hooch, a balm to cure my psychosis of ills,” he said, smiling.

“I am currently working on more woodcuts than I will ever finish in my lifetime,” Neal said. “I will conduct a linoleum-cutting workshop March 27 at the Arkansas Craft School in Mountain View.

“Exhibiting with my wife and biggest inspiration is the greatest, he said. “I am loud and annoyingly out there. Tammy’s quiet resolve and support make my crazy prints happen. She helps keep our life organized so I can create these extreme scenarios.”

Another frequent exhibitor in the show, Dennis McCann has had his work accepted into SWOP since its beginning.

“My entry this year is ‘Saturday Afternoon #2.’ I took a photo of this image of a house on Vance Street in Little Rock. Like most of my work, the light, shadows and geometric shapes were extremely important compositional elements. I tried to suggest the ‘slice of life’ and nostalgia in everyday surroundings. I’m often told by many people that they can relate to this type of image because it reminds them of past times,” he said.

“This year, the pandemic kept me working in my studio,” said McCann, who retired six years ago from the Little Rock Fire Department. “I produced more than 40 artworks. These works include revisiting previous subject matter, such as lawn chairs, drapery, figures and houses. I also experimented with found-object sculptures that I referred to in a series of drawings and paintings.

“This year, my work was included in a national show in Mena, and I had a one-man show in Van Buren. My work is shown at Boswell Mourot Gallery in Little Rock and at Justus Gallery in Hot Springs. Hopefully, 2021 will allow more people to visit these galleries.”

McCann received Bachelor of Arts, Bachelor of Science in Education and Master of Art degrees from the University of Arkansas at Little Rock. His work has been included and won awards in many regional and national exhibitions.

David Rackley said this makes the fourth time his work has been accepted into the Small Works on Paper exhibit.

“I love this show and the fact that it travels around the state and is seen in so many different communities. I was extremely pleased to have two pieces chosen for this year’s show,” Rackley said.

“All of my images are taken on black-and-white film, printed in the darkroom and then painted. ‘Imperial’ was taken in a mining town in northern Mexico several years ago and languished in my files as a negative until recently, when I decided to print and paint it. This facade has many stories to tell. I think there were even bullet holes in the side,” he said.

“’Osteria’ was taken last year in Arezzo, Italy, where my wife was participating in a theatrical workshop,” Rackley said. “How could I pass up a life-size ceramic cow on the street? I returned for several days to get the light right. The composition was perfect. Arezzo is an ancient Etruscan hill town, and I was able to do a lot of good work there.

“This has, indeed, been a crazy year. My wife, Dr. Rhonda Shook, has been teaching university classes remotely and writing magazine articles. I have been staying home as much as possible, working in the darkroom and studio and going through old unprinted negatives and finding treasures to work with, hence the ‘Imperial’ print. Like many others, we have lost friends and family members this past year and have other friends and family who were stricken but still with us. 2021 just has to be better.”

Rackley was born in Russellville but grew up in Alaska, where, he said, he “was inspired by the majestic beauty of the untamed wilderness.”

It was not until he left Alaska and enrolled at Arizona State University in Tempe that he became interested in photography and began to photograph in the Southwest and in Alaska. He earned a Bachelor of Arts degree in anthropology at Arizona State and has traveled extensively, photographing in Mexico, Guatemala, South America, Southeast Asia and Europe. He later received a master’s degree in education from the University of South Carolina in Columbia.

“We are excited to be able to recognize the wonderful and diverse talent of visual artists throughout Arkansas,” said Stacy Hurst, secretary for the Arkansas Department of Parks, Heritage and Tourism.

“Small Works on Paper showcases artists from every corner of our state and gives art lovers the opportunity to discover emerging artists and experience one-of-a-kind artworks they may otherwise never have seen,” Hurst said.

“The 2021 Small Works on Paper will be an experience no Arkansan will want to miss,” said Patrick Ralston, Arkansas Arts Council director. “In 2020, Arkansas artists submitted an array of works that capture the emotions, hopes and fears of 2020.

“Artists are a vital resource for Arkansas, and they are an important component of our state’s vision, heritage, culture and economy.”

The 2021 Small Works on Paper touring exhibition will remain on display at EACC in Forrest City through Jan. 28. Gallery hours are 10 a.m. to 4 p.m. Monday through Friday. There is no admission charge, and the public is invited.

The exhibition will be on display at the Batesville Area Arts Council’s Gallery on Main, 226 E. Main St. in Batesville, in February. Opening Feb. 2, the exhibit’s hours will be 10 a.m. to 4 p.m. Tuesday through Friday; and 10 a.m. to 2 p.m. Saturdays. The show will remain on display in Batesville through Feb. 27.

Additional locations for the traveling exhibit include the Delta Cultural Center in Helena in March; the Community Creative Center in Fayetteville in April; the Alma Performing Arts Center in Alma in May; Hendrix College in Conway in June; The Arts Center of the Grand Prairie in Stuttgart, July to mid-August; the University of Arkansas at Little Rock, mid-August through September; Arkansas Tech University in Russellville in October; and Henderson State University in Arkadelphia in November.

For more information on the Small Works on Paper touring exhibition, visit arkansasarts.org or call (501) 324-9150.