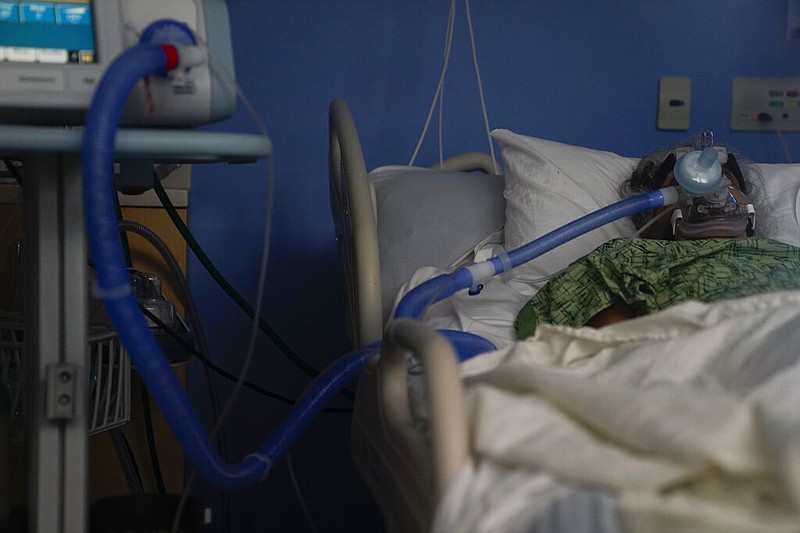 The number of Arkansans battling covid-19 in medical facilities as well as the number of patients on ventilators because of the disease both remained at or near record highs on Sunday.

Meanwhile, the state reported 3,330 new covid-19 cases, though many of those cases were delayed reports of earlier infections, officials said.

The tally of hospitalizations in Arkansas on Sunday declined by six, to 1,340, down from the previous day's record high, even as the count of patients on ventilators rose by 14, hitting a record of 237.

In a statement on Twitter, Gov. Asa Hutchinson said the 3,330 new cases "are higher than last Sunday, but over 2,000 of the new cases are from late reporting of cases from months ago."

"Regardless, they reflect how this virus impacts all of us," Hutchinson added. "Do your part to help your neighbors."

A new-case total on any given day affects the trend of active cases, a category indicating the number of people who have tested positive but have neither recovered nor succumbed to the virus. A surge in the number of new cases can be expected to be reflected in more hospitalizations and deaths later on, according to public-health experts.

Tumlison said the more than 3,300 new cases reported Sunday should be viewed in light of the data error, especially because newly reported cases tend to trend down on weekends and rise on Thursdays and Fridays.

Six fewer hospitalizations "is good, but you know, frankly that's not that many," Tumlison said, adding that the total number of hospitalizations seemed to be flat over the past several days.

"It's not enough to get excited about six fewer hospitalizations," he said.

The hospitalization figure in Arkansas generally hovered around 1,000, or slightly above, throughout much of November and December. However, beginning in late December, the state saw a sustained increase in hospitalizations, culminating in the latest record high reported on Saturday.

The increase coincided with the holiday season in late December. Public-health officials had urged Americans to avoid traveling and to instead celebrate with members of their own households.

On Sunday, the death toll in Arkansas from the covid-19 pandemic rose to 4,043 because of 33 newly reported deaths. Twenty-five of those deaths were classified as confirmed and eight as probable, according to the Department of Health.

The number of active cases in Arkansas declined by 330, to 27,492, down from a record high of 27,822 on Saturday, according to the Department of Health.

With the new cases reported on Sunday, Arkansas' cumulative number of infections since the start of the pandemic has now exceeded 255,000.

In a Zoom call with pharmacy officials on Sunday, the chief executive of the Arkansas Pharmacists Association, John Vinson, said he expects people over the age of 70 and individuals working in public schools will be the next two groups to get the covid-19 vaccine once the state moves to the second phase of vaccinations.

Nevertheless, during the webinar Vinson acknowledged he was waiting to see the governor's final plan.

Under the state's Phase 1-A immunization plan, hospitals and pharmacies are working to vaccinate health care workers, long-term care facility residents and staffs, first responders and others.

The current plan for Phase 1-B says individuals 70 or above; school personnel; and front-line workers in sectors such as manufacturing, food and agriculture, child care and essential government services will get the vaccine after Phase 1-A concludes.

The first phase is expected to continue through the end of January, according to the Department of Health.

During the webinar on Sunday, Vinson suggested that "they're not just gonna turn 1-B loose and everybody in 1-B, and all 400,000 patients, are eligible for a vaccine on Day One of 1-B."

He said: "I suspect that our state is gonna learn [from] some of the mistakes that have been made from other states in terms of everybody being released at once, and there not being enough vaccine and long lines, and that kind of stuff. They want to coordinate this in a way where the number of doses of vaccine coming in match the population of people who are eligible."

Earlier in the webinar with pharmacy officials, Vinson said the association had received a lot of questions about when the immunization effort would move to Phase 1-B. He recalled some people asking, "'When in the world are we going to 1-B? We're finished in our county. There's nobody else left to vaccinate.'"

Vinson suggested more details on the transition to Phase 1-B would be made available at Hutchinson's virus briefing scheduled for Tuesday.

"I have, just like you, anxiety about that," Vinson said, "but I'm confident within 48 hours we'll have a lot better look at that."

In an interview on Sunday, Meg Mirivel, a Health Department spokeswoman, said more information on the immunization plan is expected to be released later this week.

For his part, Tumlison said a lot will depend on vaccine availability and whether the number of doses received by the state continues to increase. He described the number of people 70 and older, in addition to the staff numbers in K-12 schools, as a significant pool of people.

On Sunday, the Department of Health reported that more than 3,600 vaccine doses had been administered in the state since the previous day.

From the state's Phase 1-A vaccination effort, 3,191 doses were administered, bringing the total number of doses given to 77,854. Of the state's received stock of 203,375 doses, 38.3% has been given, according to the Department of Health.

A federal partnership with CVS and Walgreens to vaccinate residents and staffs at long-term care facilities contributed 492 additional doses injected since Saturday, the Department of Health reported.

Individuals forced to quarantine in the district included four staffers at Williams Elementary, three staffers at McDermott and three students at Southwest, according to the report.