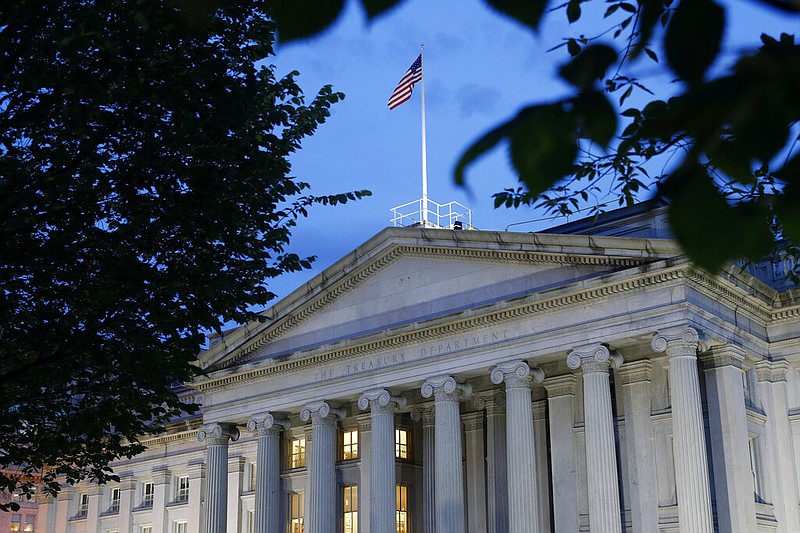 The U.S. Treasury Department building in Washington is shown at dusk in this June 6, 2019, file photo. The Corporate Transparency Act, enacted into law on Jan. 1, 2021, creates a registry managed by the Treasury Department that will contain the names of the true owners of shell companies, whether they were created domestically or in foreign countries but conducting business in the U.S.

MIAMI -- A watershed overhaul of money laundering laws stands to give U.S. investigators new tools to locate the proceeds from foreign bribery, drug trafficking and financing for terrorists.

The Corporate Transparency Act, quietly passed by Congress last month after a decade-long fight, is the most sweeping banking legislation of its kind since passage of the USAPATRIOT Act in the aftermath of the Sept. 11, 2001, terrorist attacks.

For the first time, shell companies will be required to provide the names of their owners or face stiff penalties and jail sentences. The information will be stored in a confidential database accessible to federal law enforcement authorities and shared with banks that are often unwitting accomplices to international corruption.

"It's not an overstatement that this law is a game-changer in some serious ways," said Daniel Alonso, a former federal prosecutor in New York who is now in private practice advising clients on foreign corruption and anti-money laundering issues.

For years, Alonso led teams that had to search through a maze of anonymously owned corporate entities to expose criminal activity.

"It required all kinds of shoe-leather investigating to identify who was really behind these shell companies," recalled Alonso. "You'd have to subpoena bank records and lawyers, as well as human sources, and even then you frequently hit a dead end."

The legislation was tucked into a defense spending bill that was vetoed by President Donald Trump and then overridden by Congress.

It was introduced by Rep. Carolyn Maloney, D-N.Y., in 2010 and early on faced opposition from banks and business groups worried about red tape, as well as from states such as Delaware and Wyoming, which reap important revenue from the registration every year of nearly 2 million corporations and limited liability companies in the U.S.

But international financial scandals involving soccer's governing body and the 1MDB development bank from Malaysia, as well as the leaking of the so-called Panama Papers that exposed details of offshore entities, eventually softened criticism by revealing the prominent role played by secretive shell companies in hiding the proceeds from illicit activity.

The U.S. financial system -- the world's largest and most stable -- has long been a magnet for dirty money. But the tools to prevent abuse by bad actors haven't kept pace with technology and a proliferation of instant, online transactions across borders.

The new law seeks to strengthen controls by creating a registry managed by the Treasury Department that will contain the names of the true owners of both domestically created shell companies as well as foreign ones conducting business in the U.S.

Creating a shell company in states such as Delaware requires little more than payment of a $90 fee and a one-page letter listing the entity's name, a P.O. Box and a registered agent that is frequently a law firm dedicated to churning out companies in bulk. The true owners are rarely listed, their identities hidden under a web of subsidiaries. But once created, the entities can be used to purchase legitimate assets, such as real estate, using ill-gotten funds furtively transferred into a U.S. bank account.

"Congress was late to acknowledge that secrecy is alive and well in the United States," said David Weber, a former U.S. Treasury investigator who was one of two experts to review the Panama Papers before publication. He now is a forensic accounting professor at Salisbury University in Maryland.

"Kleptocrats and corrupt foreign officials did not need secret bank accounts in Switzerland," Weber said. "They were right here."

In a less touted step, the law also dramatically expands awards for whistleblowers. Specifically, individuals who come forward with evidence of financial malfeasance are entitled to receive up to 30% of money seized by the Treasury or Justice departments when their information leads to successful law enforcement actions. Previously, awards were capped at $150,000.

"This could end up being the secret sauce," said Michael Nadler, a recently retired federal prosecutor in Miami who has brought charges against dozens of corrupt Venezuelan officials. "It has the potential to weaponize low-ranking company officers who have access to sensitive client information and see criminal behavior."

The Justice Department will also have expanded powers to demand foreign bank account records when it suspects criminal activity. And the law also extends oversight to the trade in high-value antiquities. Expensive artwork -- a frequent vehicle to hide the proceeds of corruption -- may also be brought within the reach of anti-money laundering laws pending a study the government must produce within a year.

While it may take some time for the law's effects to be felt, experts believe it will drive away from the U.S. some of the dirty money from abroad that has driven up real estate prices in major cities such as New York, Miami and Los Angeles.

But nobody expects crime and corruption to stop. One weakness of the law, Weber said, is that it will push crimes further into the darkness, away from the U.S. to less reputable jurisdictions where secrecy remains.

"In many ways," he said, "this is like a multimillion-dollar game of whack-a-mole."