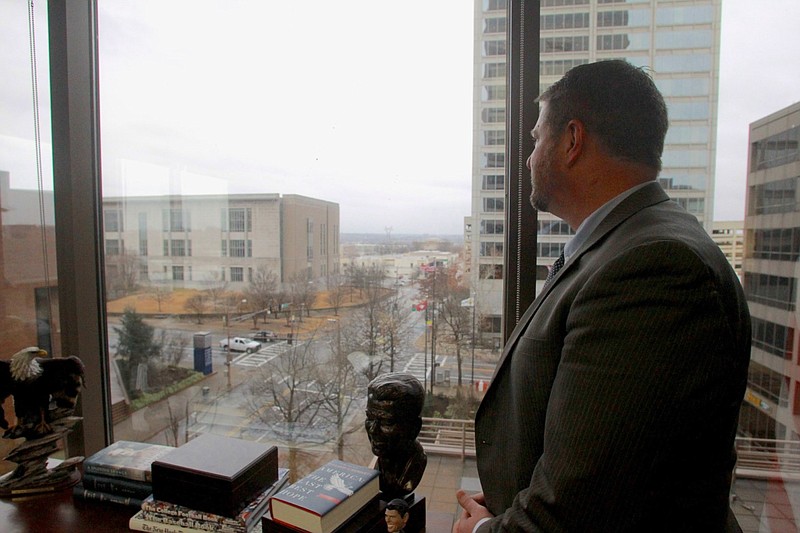 Acting U.S. Attorney Jonathan Ross looks out at the U.S. Federal Courthouse in downtown Little Rock from his vantage point on the fifth floor of the Simmons Bank Tower in this January 2021 file photo. Ross was appointed as U.S. attorney for the Eastern District of Arkansas after the resignation of U.S. Attorney Cody Hiland.

Jonathan Ross, sworn in Jan. 1 as acting U.S. attorney for the Eastern District of Arkansas, said his primary focus will be to continue the office's emphasis on putting violent felons behind bars until a successor for the former U.S. attorney, Cody Hiland, is named.

Hiland resigned the position he had held for three years on Dec. 31, citing the likelihood that he would be replaced by the incoming Joe Biden administration and expressing his desire to explore opportunities in the private sector.

"He just told fascinating stories from his time at the department," Ross said. "I came to him after class one day and asked him, 'Mr. Johnson, how do I do what you do?' I recall his answer being a bit of a laugh when he said, 'Well, son, you can't do what I do.'"

Ross said that Brown told him that with so few positions in the U.S. attorney's office, whenever a position would open up there would be hundreds of applicants lined up trying to fill it.

"He said the chance of getting hired was so small that it wasn't a wise course to try and hold out for the opportunity," Ross said. "So I said, 'Well, humor me. What would you do if you were in my shoes?'"

Ross said Brown told him to work in the U.S. attorney's office, he would have to have five to 10 years of litigation experience, and he advised that going to work for a prosecuting attorney's office such as Jegley's would be the best way to get that experience.

With that in mind, Ross applied for, and was hired for a deputy prosecutor position in Jegley's office. He served there from 2003 until 2012, prosecuting hundreds of criminal cases. Looking back on Ross' years with his office, Jegley praised his former deputy.

"We had him primarily handling the office's business in Perry County," Jegley said. "Matters pertaining to drug seizures and asset forfeitures, and he did a spectacularly fine job."

Jegley said Ross' intent to continue gun crimes prosecutions as part of the Project Safe Neighborhoods initiative comes as welcome news to his office. He said federal prosecutions of convicted felons arrested with firearms seemed to be curbing violent incidents, at least until a nationwide surge in violent crimes was seen during 2020. Jegley said that he believes there would have been an even greater increase in violent crime in Arkansas' eastern district had it not been for Project Safe Neighborhoods and the resulting federal prosecutions.

"I feel like we'd have more problems than the considerable ones we have right now had it not been for my extra efforts that they, my office and the street police have been participating in," he said. "You can't measure what you don't know but, having done this for about 30 years, my instincts are that things could have been worse than what they have been so far."

After almost 10 years as a deputy prosecutor under Jegley, Ross said in 2012, he received word that several assistant U.S. attorney positions had opened up with the Eastern District office, so he applied.

"By the end of January I began to get word of who was hired to fill those five positions and I had not even gotten an interview," he said. "I began to consider washing my hands of this pursuit but I really struggled with that because I had focused on it for so long."

Ross said he turned to his faith to help him let go of the dream he had harbored, to the point of praying one night to have that ambition taken from him so that he could get on with his life.

"And as soon as I prayed that prayer, the thought came to me," he said. "Have you ever thought of applying somewhere besides your backyard?"

About two weeks later, Ross said he ran into Connor Eldridge, then just over a year into a term as U.S. attorney for the Western District of Arkansas, at a Razorback football game. He said he had been introduced to Eldridge briefly when he and a mutual friend ran into Eldridge at an airport about two years earlier.

"We talked for a couple of minutes," Ross said. "I just said, 'Hey, congratulations on being named U.S. attorney, I hope you're enjoying it, that's a phenomenal opportunity, and go Hogs,' and that was about it. We talked for three minutes and the following week Connor gave me a call."

Eldridge had called to ask Ross to apply for one of several positions that were about to open up in his office.

"Four months later I was working in Texarkana," Ross said. "That was July of 2012 and I was living the dream. I had my dream job and, while we did have to relocate, it was just two hours away."

In 2015, not long before Eldridge left the U.S. attorney's office, Ross was hired by the Eastern District of Texas, a move that, because it was a shared office, required little more than a change of paperwork and chain of command.

"I don't even think he even had to change desks," Eldridge said. "We hated to lose him but he had some other opportunities in that office.It was a bigger office."

Eldridge said because a U.S. attorneys are selected by the president, and typically leave when that president leaves office, the importance of making good hiring decisions is paramount.

"Some say the biggest job you have is who you hire because they are going to stay in the system and you're going to leave," he said with a laugh. "And that's true, I've been gone for five years and Jonathan's now in his third U.S. attorney's office, and he's leading it."

In early 2018, Ross came back to Little Rock at the behest of Hiland, who had asked him to come work for him as first assistant U.S. attorney. He said what persuaded him was Hiland's assertion that Ross' experience in and relationship with Jegley's office would be a key link to making the Project Safe Neighborhoods objective work.

"To me that told me that his mind was in the right place, that he was serious about being a prosecutor and doing something that wouldn't just be marking time, but would make a real difference," Ross said. "This last three years has been about a number of things but the clear focus of this office has been the PSN program."

Hiland, who had recommended Ross to take over as acting U.S. attorney, said that Ross was a logical choice.

"The office is in good hands with Jonathan," he said. "To me, to lead any group you have to love them and they have to know that you love them. That office knows Jonathan loves them and has their backs." 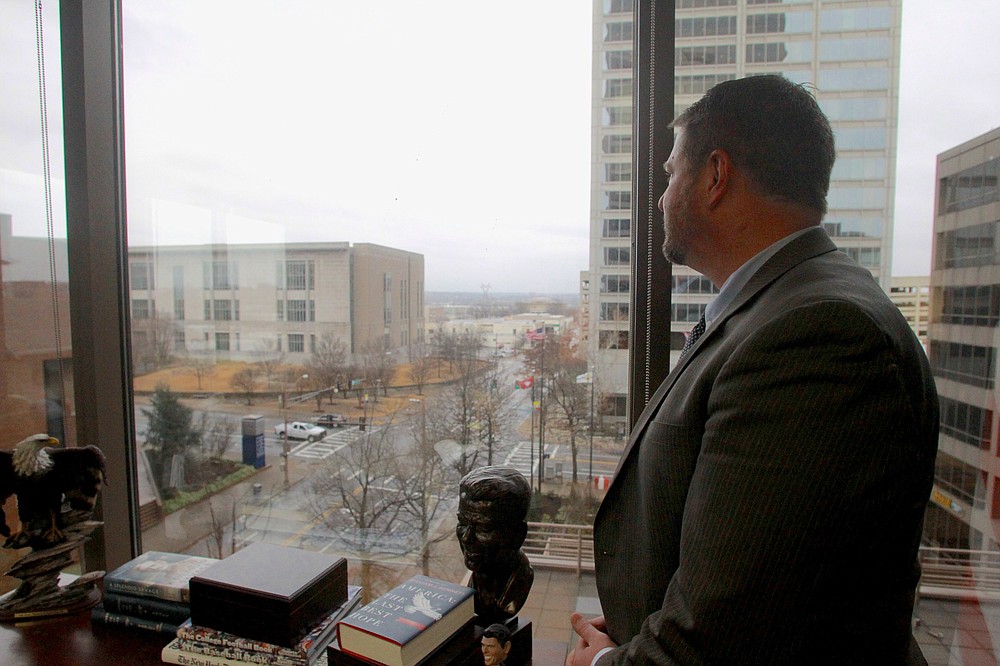 Acting U.S. Attorney Jonathan Ross looks out at the U.S. Federal Courthouse from his vantage point on the 5th floor of the Simmons Bank Tower in downtown Little Rock. Ross was appointed to the position, which he will hold until a new U.S. attorney for the Eastern District of Arkansas is appointed, following the resignation of former U.S. Attorney Cody Hiland. (Arkansas Democrat-Gazette/Dale Ellis)
ADVERTISEMENT