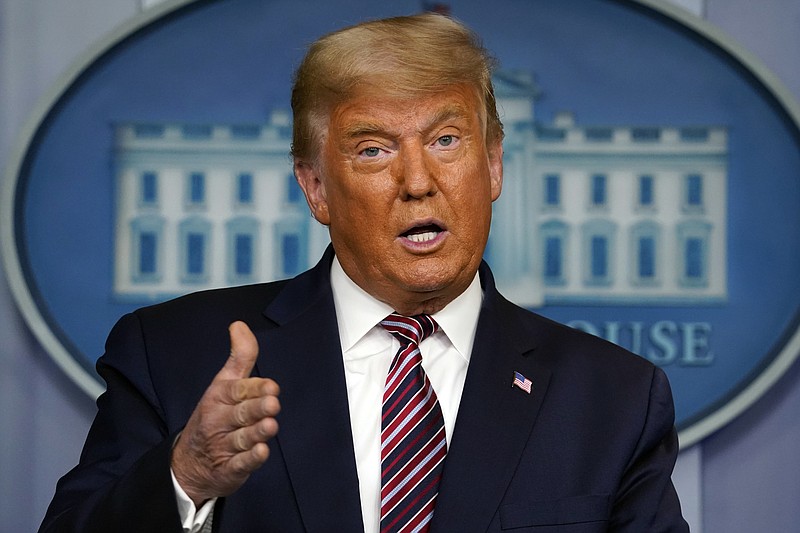 Banned from social media and abandoned by some staff after his supporters rioted at the U.S. Capitol, President Donald Trump and a dwindling circle of advisers plan a defiant final week in office, according to people familiar with the matter.

Trump is confident Vice President Mike Pence and members of his Cabinet won't attempt to remove him under the 25th Amendment, the people said. Pence is dismissive of the idea of trying to use that authority to drive Trump from office, one person said.

The president and some allies also believe Democrats are overreaching by trying to once again impeach him over Wednesday's mob at the Capitol, and they think Senate conviction would be unlikely in any event.

One adviser called Democratic consideration of impeachment a political gift to Trump. Pence hasn't discussed the 25th Amendment beyond privately dismissing the approach as not feasible, according to a person familiar with the matter.

Trump and Pence haven't spoken since Wednesday, though, when the vice president sheltered in place at the Capitol after the building was stormed by Trump supporters. Sen. James Inhofe of Oklahoma told the Tulsa World newspaper he'd "never seen Pence as angry" as he was after being blasted by Trump for not intervening in the congressional count of Electoral College votes. Trump tweeted that Pence lacked "courage."

Trump plans to run out the clock on his four years in office by highlighting what he believes are his biggest accomplishments, including the barrier his administration built on at least part of the U.S. border with Mexico. A trip to Alamo, Texas, near the border is expected on Tuesday, a White House spokesman said.

Trump is also preparing at least one more round of pardons, and he will try a final time to advance his administration's effort to bring big technology companies to heel, the people said, though it isn't clear what he may do.

It's seen as a last-ditch attempt to rehabilitate Trump's legacy after his supporters stormed the Capitol on Wednesday, resulting in five deaths including that of a Capitol Police officer.

Trump has given no indication that he's considering resigning, as many Democrats and some Republicans have demanded. A small group of House Republicans wrote to Joe Biden on Saturday, pleading with him to persuade Speaker Nancy Pelosi to back off impeachment as an olive branch in the interest of national unity.

Trump's apparent confidence belies his political and legal peril. Congressional Democrats are furious about the Capitol riot and are determined to hold the president accountable. Some Republicans have said his actions merit impeachment, including Sen. Pat Toomey of Pennsylvania.

Federal prosecutors also haven't ruled out charging Trump, among many others, for his role in the assault on the Capitol, while pledging that the ongoing investigation will not be politically targeted.

Trump's views on the matter normally wouldn't be much of a secret. But without his Twitter account, @realDonaldTrump, and after a failed, whack-a-mole effort to post from alternative accounts, an eerie silence has descended over the White House.

Inside, Trump has spoken with aides including Mark Meadows, Jared Kushner, Dan Scavino and Kayleigh McEnany, the people said. Outside the building, there's public clamor to remove Trump before his term ends. Some 57% of Americans want the president removed immediately, a Reuters/Ipsos poll published Friday found, while nearly 70% disapprove of Trump's actions leading up to the Capitol riot.

Talk of impeachment or removal from office would make Trump a martyr to his base, one person said. If the vice president led an effort to remove him, it would only reinforce Trump's declarations that a "deep state" of government bureaucrats has long been bent on opposing him, another said.

Between the impeachment movement and Trump's censorship by social media, the president and his advisers believe his supporters are galvanized. Trump feels impeachment could have a boomerang effect on Democrats, one person said, while another dismissed it as the latest Democratic witch hunt.

Trump and his team will respond to the Twitter ban during his final week in office by leaning into his fight against what he's called censorship of Republicans by large technology companies. The president has long demanded that Congress revoke Section 230, a liability waiver social media companies depend upon to allow relatively unfettered speech on their platforms. He'll likely amplify that call, though Biden's inauguration on Jan. 20 and Democrats' takeover of the Senate is expected to snuff out prospects for any change to the law for now.

Trump has prepared several executive orders related to big technology companies, but it's not clear if any will be issued, one person said.

It isn't clear if Trump's team is yet preparing for a Senate impeachment trial. White House counsel Pat Cipollone won't be involved after leading Trump's defense during his first impeachment a year ago in part because his job ends with Biden's inauguration, one person familiar with the matter said. Deputy Counsel Pat Philbin also will not participate, the person said.

The Senate won't reconvene until Jan. 19 and Senate Republican leader Mitch McConnell said Friday in a memo to colleagues that a trial can't begin before then unless all 100 senators consent to it -- an exceedingly unlikely development as Trump retains allies among Republicans in the chamber.