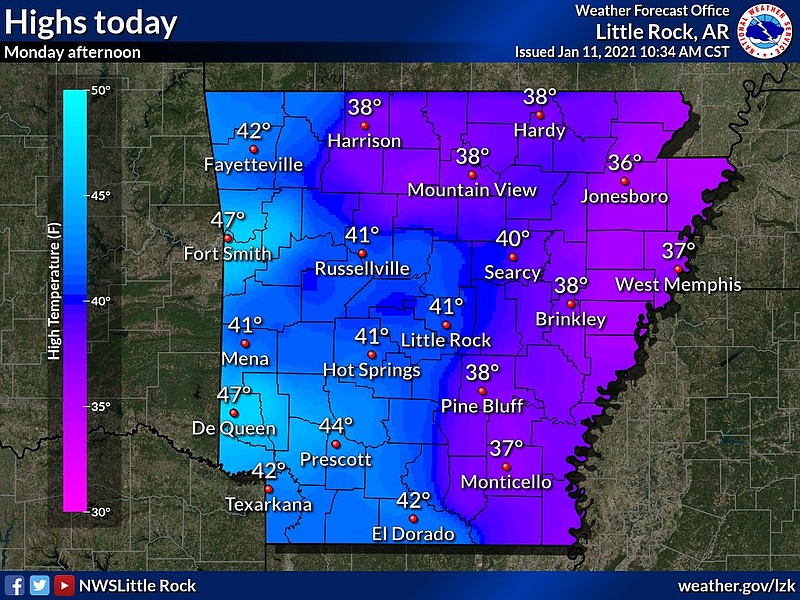 Forecasts show temperatures in the high 30's to lower 40's Monday afternoon, according to the National Weather Service.

Most of the state can expect to see warming temperatures throughout the week, before a cold front moves in Thursday into Friday, according to the National Weather Service in North Little Rock.

Any light snow in the forecast has already moved to the southeast and the winter weather advisory and all storm warnings have been canceled for southern Arkansas, said meteorologist Dennis Cavanaugh.

Expect to see clearing skies with highs in the upper 30s to lower 40s statewide Monday, Cavanaugh said, with southwest Arkansas expected to be a little warmer by mid-afternoon Monday.

There are currently no rain or snow chances in the forecast this week, Cavanaugh said. The rest of the week will be dry with warming temperatures, with temperatures expected to be in the low 50s Tuesday and upper 50s by Thursday, he added.

A cold front is expected to move in Thursday night into Friday, bringing temperatures down about 10 degrees, Cavanaugh said, with the highs expected to be in the upper 40s to low 50s.