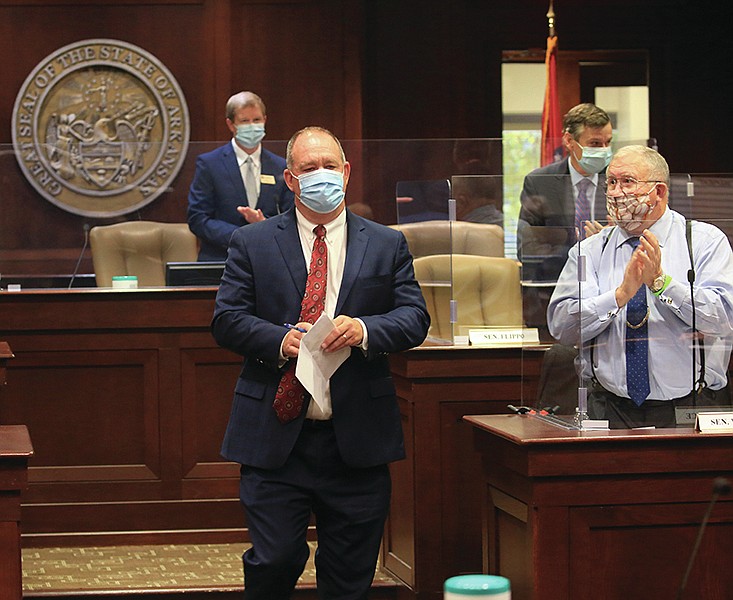 Sen. Jimmy Hickey Jr., R-Texarkana, makes his way to the podium Friday Nov. 6, 2020 in Little Rock after being elected as the next Senate President Pro Tempore during an organizational meeting of the Arkansas Senate. (Arkansas Democrat-Gazette/Staton Breidenthal)

The General Assembly’s regular session began Monday, and a wide range of bills are up for consideration. Here are some bills and issues to look out for as the session gets underway.

[QUIZ: How much do you know about the state Legislature? » arkansasonline.com/legquiz ]

Hutchinson said he wants to make sure the state’s health care system is prepared for vaccine distribution as it gets further underway this spring, among other health care-related issues.

Read more on the proposal.

Hutchinson wants every high school student in the state to graduate with credit from a computer science class.

Read more about the bill.

The governor said the state is still deliberating on the best way to continue to increase teacher pay, such as raising the minimum teacher salary again or incentivizing the districts to raise the median salary level.

After the death of George Floyd, Hutchinson created a task force to analyze the best practices and procedures for law enforcement in the state.

The governor has a plan for a variety of tax cuts. Read more on the governor’s proposals.

Sen. Jason Rapert, R-Conway, has filed Senate Bill 6, which would ban abortions except to save the life of the mother or to remove an ectopic pregnancy. Read more on the proposal.

This bill proposes eliminating language from criminal codes requiring a person to retreat, if possible, before using deadly force in self-defense. Read more on the bill.

At least three bills have been introduced that could expand Arkansas women's access to birth control, breast milk and feminine hygiene products. Read more on the proposals.

Read more on other priorities and bills this session. To stay up-to-date with everything going on during the session, subscribe to our politics newsletter and visit our legislature page.