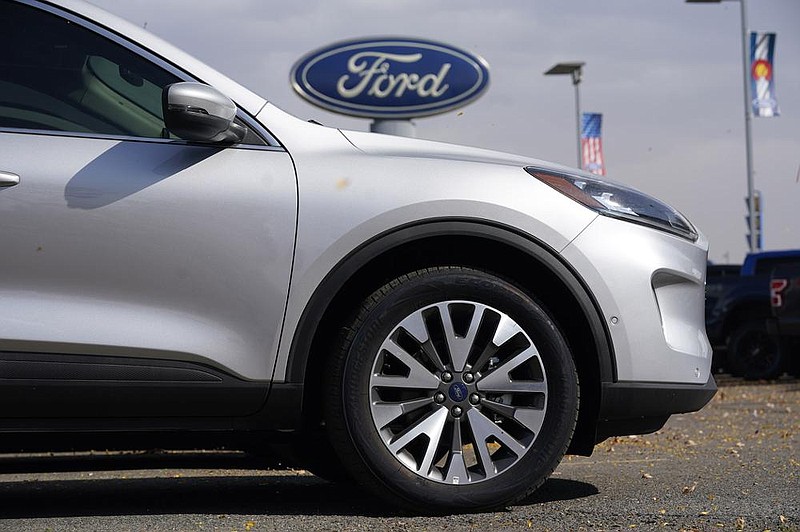 A 2020 Ford Escape SUV sits at a dealership in Denver in this file photo. Ford said its Louisville Assembly Plant in Kentucky, which builds the Escape along with the Lincoln Corsair, will be idled this week because of the semiconductor shortage. (AP)

Automakers in North America are beginning to feel the effects of a global shortage of semiconductors that has caused a crunch for manufacturers worldwide, adding a wrinkle to the industry's attempted comeback from the coronavirus crisis.

Ford Motor Co. confirmed Friday that it will idle its Louisville Assembly Plant in Kentucky this week "due to a supplier part shortage connected to the semiconductor shortage," company spokeswoman Kelli Felker said.

Ford builds its Escape and the Lincoln Corsair SUVs in Louisville. The automaker said it has moved up a previously planned week of downtime to next week due to the parts shortage. The production stoppage will affect 3,900 workers who will make approximately 75% of their gross pay during that time.

"We are working closely with suppliers to address potential production constraints tied to the global semiconductor shortage," Felker said in a statement.

Meanwhile, Fiat Chrysler Automobiles NV said Friday that it would delay the restart of its Toluca, Mexico, plant, which builds the Jeep Compass, and would schedule down time at its plant in Brampton, Ontario, which builds the Chrysler 300, Dodge Charger and Dodge Challenger.

"This will minimize the impact of the current semiconductor shortage while ensuring we maintain production at our other North American plants," company spokeswoman Kaileen Connelly said in a statement.

A spokesperson for Toyota Motor Corp.'s North America division told The Detroit News that the automaker has scaled back production of its Texas-built Tundra pickup truck by 40% this month in response to the shortage. Toyota is still evaluating how the shortage might affect other products as the manufacturer attempts to put in place "counter-measures" to minimize the impact.

General Motors Co. has not announced any impact on its production schedules, but spokesman David Barnas said in a statement that the Detroit automaker is "aware of the increased demand for semiconductor microchips as the auto industry continues its global recovery."

"Our supply chain organization is working closely with our supply base to find solutions for our suppliers' semiconductor requirements and to mitigate impacts on GM production," he said.

The shortage is sending a ripple of disruptions across the automotive industry, according to automakers and media reports from around the world. There are a number of factors that explain the parts issue, but a major one has to do with the pandemic.

When large swaths of manufacturing operations ground to a halt in early 2020, suppliers found themselves with plenty of capacity of fill new orders. But as consumer demand bounced back quicker than expected, much of that capacity went to consumer goods such as gaming devices and cell phones.

When the automotive manufacturers resumed production and encountered more robust demand than they had expected, they were essentially at the back of the line.

"If you consider this to be one of those onion analogies, as you pull it apart, it's all going to go down to the pandemic," said Phil Amsrud, senior principal analyst for IHS Markit's automotive semiconductor research area.

Semiconductors are crucial components used in everything from instrument clusters to the infotainment systems that are ubiquitous in modern-day vehicles. And, automakers are increasingly competing with other sectors for the components as they need more of them for technologically-advanced, electric-powered vehicles.

'EVERYBODY HIT THE BRAKES'

"It's not uncommon in any year for there to be tightness in the supply chain, but a lot of what we're seeing now is a result of, everybody hit the brakes early last year and then has been trying to read the tea leaves to figure out, 'when do I start ramping production back up?'" said Amsrud. "By the time the automotive [manufacturers came] back, all that capacity is consumed elsewhere."

Japanese automaker Nissan Motor Co. is adjusting production of its Note hatchback at its Oppama plant in Japan. A spokeswoman for the automaker's North America operations said: "For the U.S. specifically, we are working closely with our supplier partners to monitor the situation and assess any potential impact on our operations."

The Nikkei, a Japanese newspaper, reports that Honda Motor Co. will cut back vehicle production because of the shortage, as well. The Japanese automaker will cut production by about 4,000 units this month, the newspaper said.

A spokesman for American Honda Motor Co., Inc. said that, because of the shortage, "Honda's purchasing and production teams are currently evaluating this issue in the effort to limit the impact of this situation on our production in North America and maintain our ability to meet the needs of our customers."

German automakers Volkswagen AG and Daimler AG, too, have said the shortage will require them to scale back production. Also sounding the alarm: automotive parts manufacturers.

"The disruptions caused by the coronavirus crisis have caused extreme volatility in the automotive industry," Continental AG, a German parts maker, said in a statement, explaining that the semiconductor industry has lead times of six to nine months and has not been able to keep up with auto industry demand. "The bottlenecks from the semiconductor industry are expected to continue well into 2021, causing major disruptions in Continental's production."

Information for this article was contributed by Kalea Hall and Breana Noble of The The Detroit News (TNS).