RESTAURANT TRANSITIONS: 2020 was a bad year for restaurants, but many came through 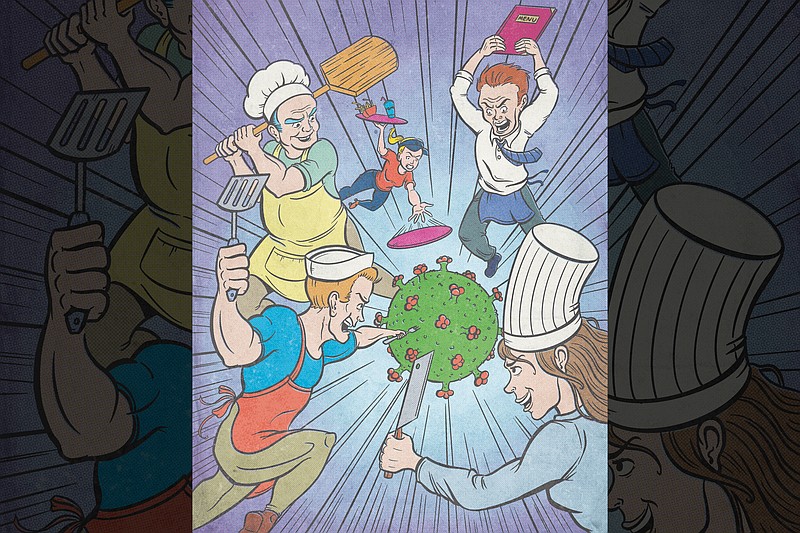 Britain's Queen Elizabeth II declared 2020 was an "Annus horribilis," and it certainly was for the hospitality industry.

The covid-19 pandemic was the big news in just about every category in the year just past, but it had a particularly virulent influence on eating and drinking establishments. Restaurants, bars and clubs closed (voluntarily or not), reopened and closed again, after employees were exposed to the virus, or permanently because they were unable to sustain the hit to their bottom lines over so many months.

Many survived by cutting back hours and/or menus; completely converting their business models from dine-in to takeout; taking out paycheck protection loans and/or getting government grants; launching crowd-funding campaigns; adding delivery service; opening new to-go windows; and/or handing folks their food at curbside.

This is a roundup of the year past, with a nod to the year en route. It's partial and noncomprehensive and based on a culling of 50-plus weeks of Restaurant Transitions columns in the Thursday Style section. The sheer volume of restaurant openings (fewer) and closings (more), chef and menu changes and other restaurant news means that some worthy items didn't make it into the list.

Among the biggest noncovid-coverage items in the year just past: 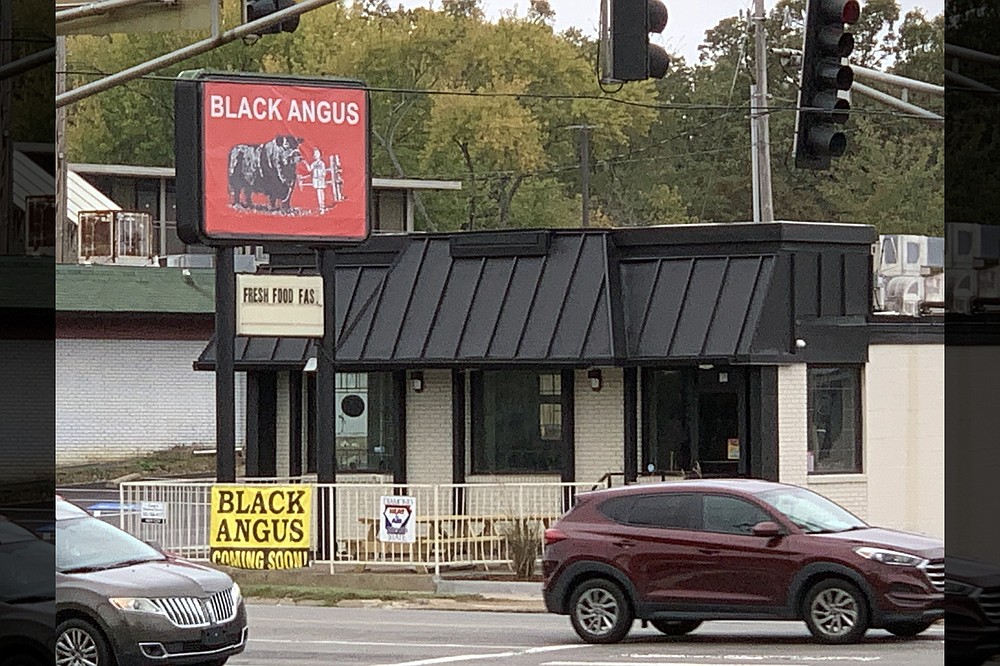 ◼️ Black Angus' move. The restaurant, which had served charcoal-grilled steaks and burgers for 30 years at 10907 N. Rodney Parham Road, Little Rock, lost its lease and was forced to seek a new home. Which it found — on the site of its old home — the corner of West Markham and Van Buren streets. The "old" location closed March 24; the new one took over the former Chi's Too and involved the take-down of a long-standing Subway to create parking. Long lines immediately formed in the drive-thru when it opened in October. 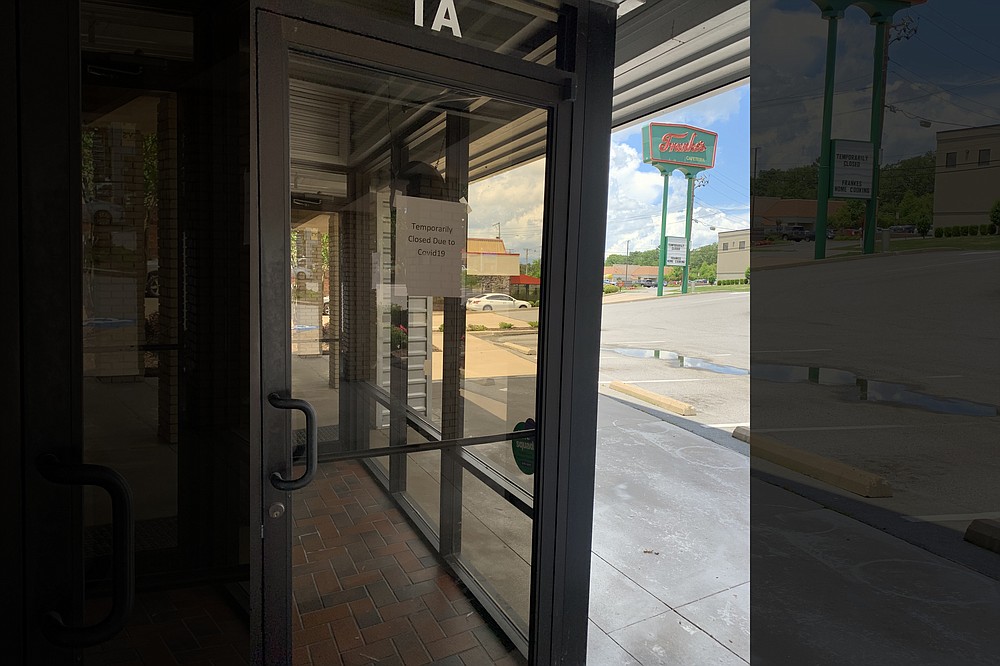 ◼️ The death of Franke's, which started with the September 2019 closure of the Franke's Cafeteria in the Regions Bank building, 400 W. Capitol Ave., Little Rock, followed by the Jan. 1 closure of the next-door Sack It by Franke's and the revelation in early February of the closure of the Franke's at 1103 Fendley Drive, Conway, which had opened in May 2019. The cafeteria in the Market Place Shopping Center, 11121 N. Rodney Parham Road, Little Rock, closed March 23, supposedly temporarily due to the covid-19 outbreak, but it turned out to be permanent: in June, signs sprouted informing all that the locks had been changed, the cafeteria's phone number was disconnected and the website disappeared. A final sign showed up in July, announcing that the space was available. It still is. 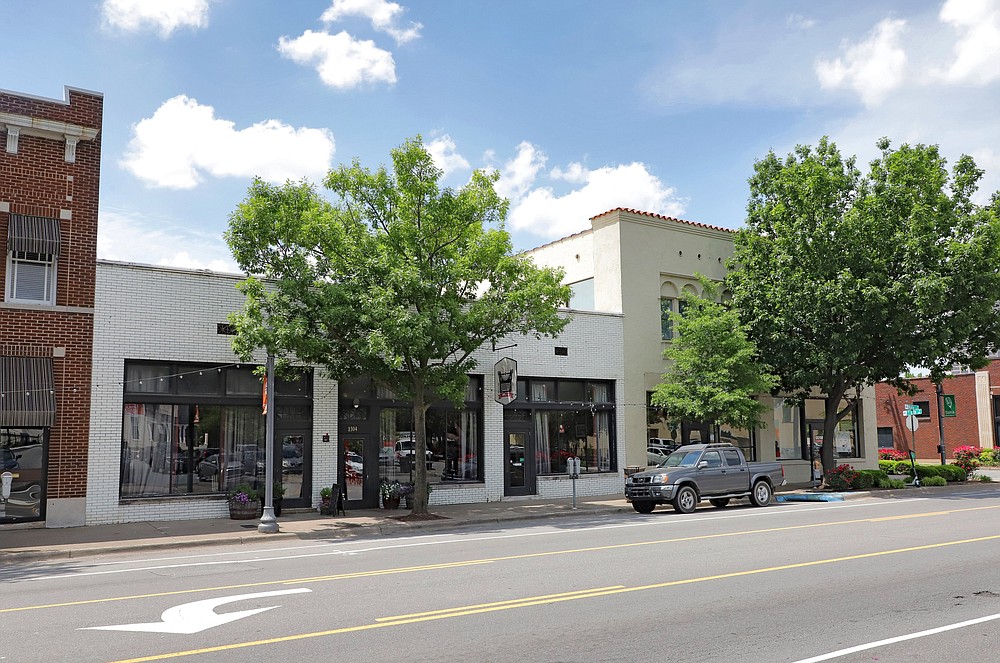 ◼️ The sale of South on Main, 1304 Main St., Little Rock, in February. Former owner-chef Matt Bell announced that he and his wife, Amy, were moving to Nashville, Tenn., where he was taking over Gray & Dudley, the restaurant in the 21c Museum Hotel. The new owners: Don Dugan and Tasha Stratton, also owners of Dugan's Pub, Dizzy's Gypsy Bistro and Stratton's Market.

◼️ Joel Antunes, whose hiring as executive chef at the Capital Hotel, 111 W. Markham St., Little Rock, made news in December 2012 and was a real coup for hotel owner Warren Stephens, retired in mid-January, deciding to "move on," although we're still not sure where he moved on to. In February, the hotel announced the hiring, but not the name, of his replacement. The hotel has been closed since March and we have not heard anything about when it will reopen or who will run the kitchens when it does. 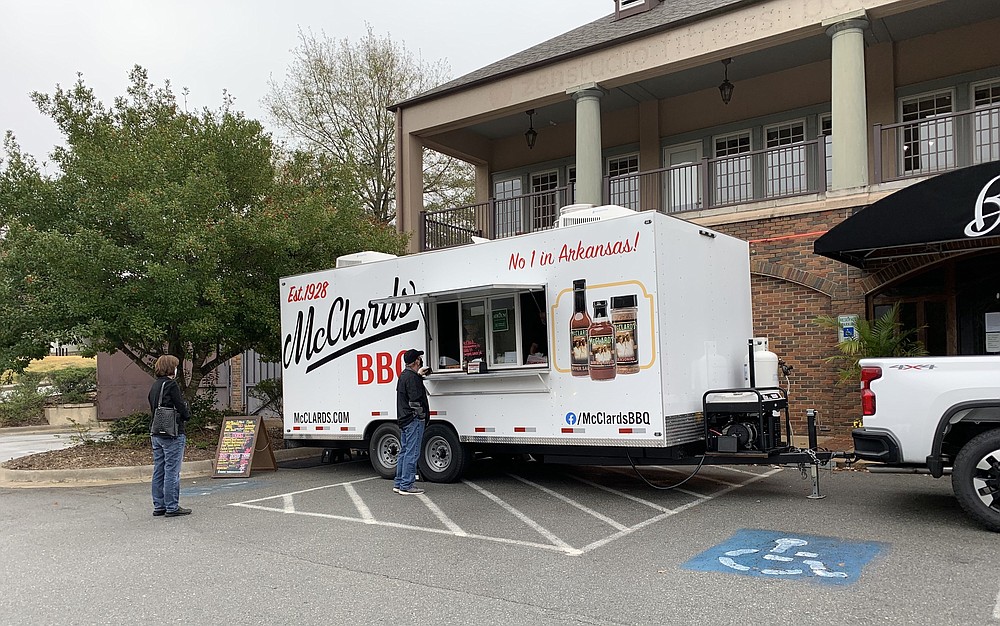 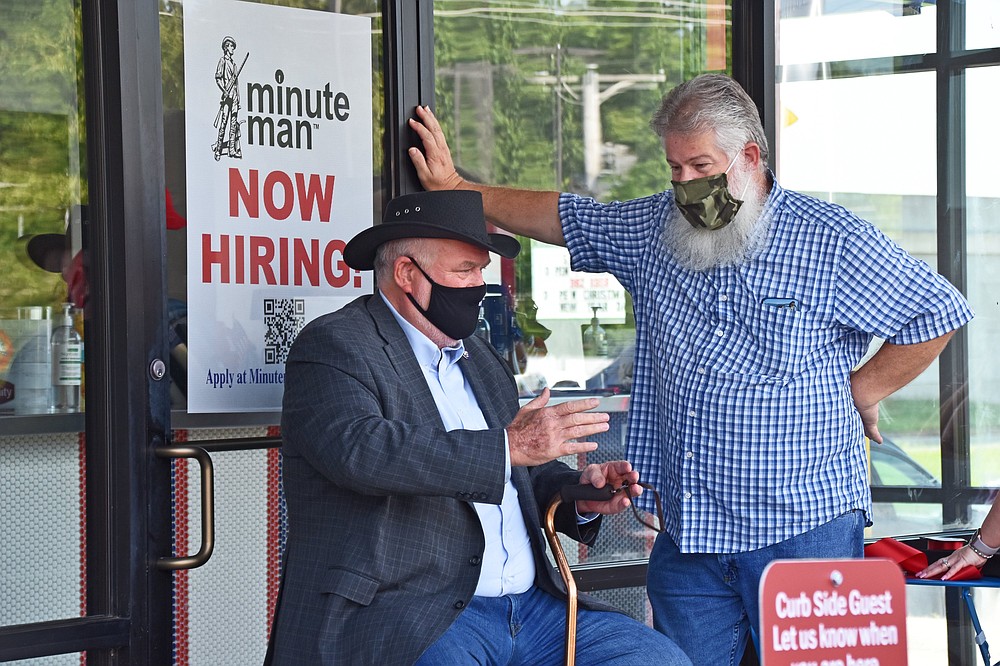 ◼️ In September came the rabidly awaited Minute Man resurrection with the opening of a restaurant at 140 John Hardin Drive in Jacksonville.

◼️ The long-long-long awaited — as in, like, two years — downtown location of A.W. Lin's Asian Cuisine, 309 Main St., Little Rock, opened in early February, then closed a month later because of the pandemic, reopening Sept. 1.

◼️ In the wake of the closure of La Madeleine Country Fresh Cafe, 12210 W. Markham St., Little Rock, the Chi family, which held the franchise for the Dallas-based chain, plans a second Lulu's Seafood Kitchen, "rebranding" from what had been Lulu's Crab Boil, with a new logo that pays tribute to the late materfamilias, Lulu Chi. 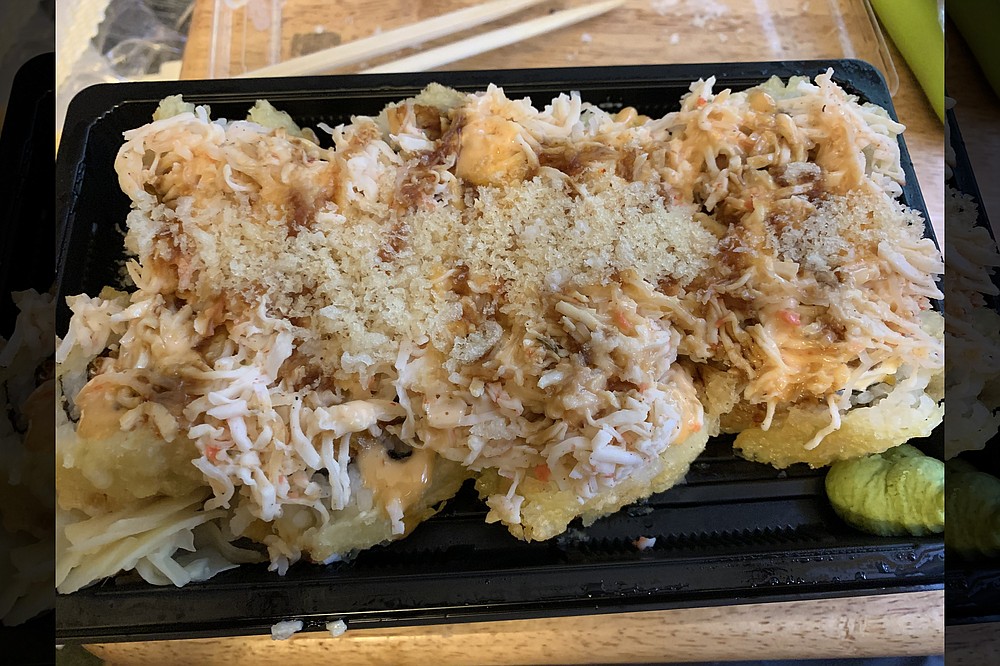 ◼️ Rock n Roll Sushi, an Alabama-based franchise-chain operation, opened its first Arkansas outlet at the end of May in the former Which Wich storefront in the Chenal Creek shopping center, 12800 Chenal Parkway, Little Rock, and its second outlet in August in the former Atlas Bar, 1224 Main St., which Tony Poe closed at the end of June.

SOUTH OF THE BORDER

◼️ Taqueria La Pasadita opened its outlet in May in the Market Place Shopping Center, 11121 N. Rodney Parham Road, Little Rock, in the storefront that had most recently housed the Happy Egg and before that B-Side and Lily's Dim Sum Then Some. After its eviction from The Hop shack at 7706 Cantrell Road, the taqueria moved into a food truck that operated at 201 Keightly Drive.

◼️ Taqueria Los Agaveros opened in April in the drive-thru-only space at 3600 S. University Ave., Little Rock, which once housed a Dunkin' Donuts and more recently Chicago's Phillys and Gyros. 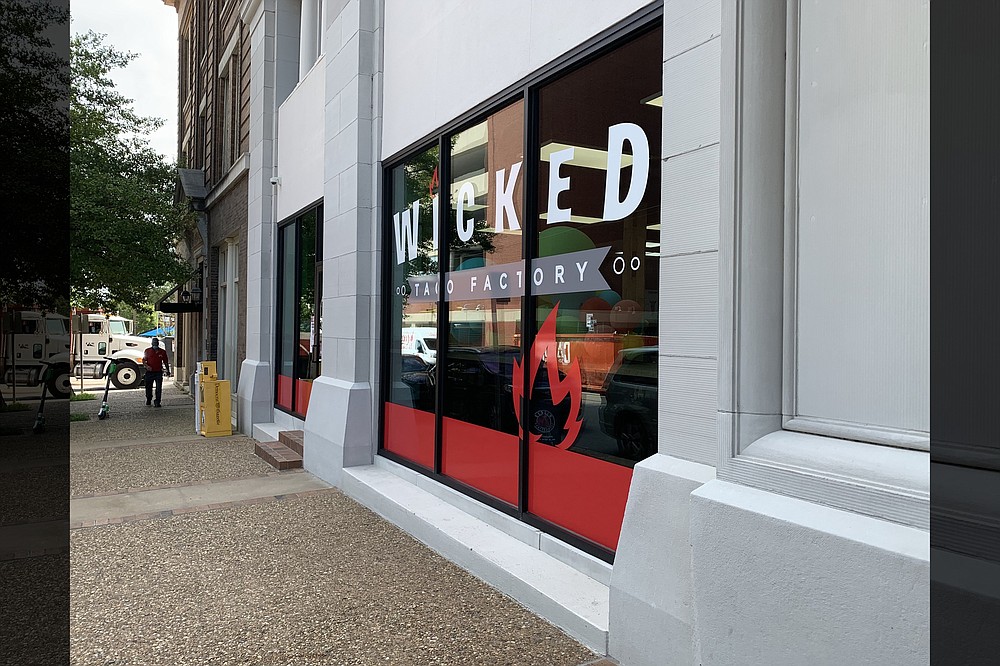 ◼️ Wicked Taco Factory, the new incarnation of the Grills on Wheels Mexican food truck, opened in September in the space in the Pyramid Building, 221 W. Second St., Little Rock, that had once been a Subway outlet. The food truck, usually parked on a vacant lot next to Frances Flower Shop, 1222 W. Capitol Ave., is on hiatus.

◼️ Upscale coffee shop Fidel & Co opened in late January in the Distillery, 500 Shall St. in Little Rock's East Village, across the street from Donnie Ferneau's Cathead's Diner, which at some point closed, has not reopened and appears to have been a possibly permanent covid-19 casualty.

◼️ A palace coup in June at Rebel Kettle Brewing, 822 E. Sixth St., resulted in changes in ownership/management, menu and also the name, to East Sixth Brewing Co. The taproom, which had closed temporarily on account of covid-19, and the entire brewing operation shut down in December. 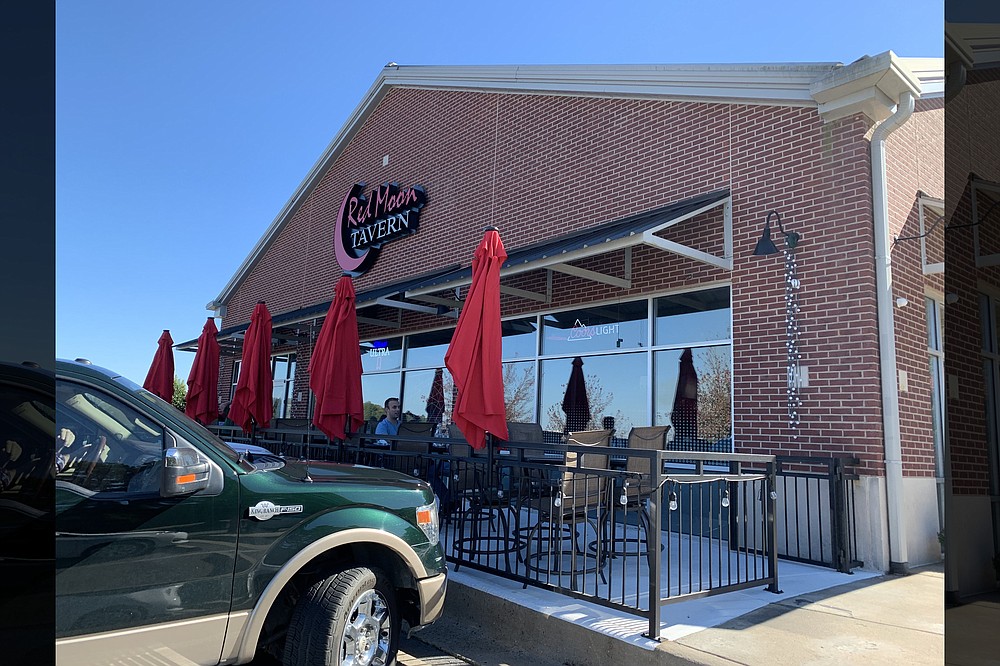 ◼️ Gusano's Chicago-Style Pizzeria opened at the tail end of August in the former Grub's Bar & Grille/Chili's space in the Village at Pleasant Valley shopping center, 10700 N. Rodney Parham Road, Little Rock. It wasn't quite a resurrection of the longtime, trouble-plagued President Clinton Avenue spot that closed in January 2019, but a new branch of the Rogers-based chain for which the River Market restaurant was the progenitor.

◼️ Hubcap Burger Co., an offshoot of Cotham's in the City, opened in early February in the former Casey's Bar-B-Q/Arkansas Burger Co. building, 7410 Cantrell Road, offering Cotham's signature hubcap burger and a lot of other items on buns.

NORTH OF THE RIVER

◼️ August saw the long-awaited opening of Cypress Social, a restaurant/bar project of Jim Keet (Petit & Keet, Taziki's) on the former Cock of the Walk campus, 7103 Cock of the Walk Lane (off Maumelle Boulevard), on the North Little Rock side of Maumelle. Keet and his folks completely rebuilt the entire rustic facility, ground to roof, with a multilevel bar extension and new multitier patio/deck.

◼️ Zaffino's by Nori, 2001 E. Kiehl Ave., Sherwood, closed in June. Nori Fryar, who had worked at the venerable Italian restaurant as a hostess and waitress for several years, bought it in 1997 and lent to the business her name as well as her authentic recipes. An establishment called Bennett's, from the folks who run Keith & Co Artisan Sandwich Shoppe in Jacksonville, is supposedly in progress there.

◼️ It took awhile, and the full roll-out took another while, but Brood & Barley, a second Flyway Brewing taproom, opened in June in the former Core Brewing Public House at 411 Main St. in North Little Rock's Argenta District. The gastropub has proved popular, especially so on warm-month weekends when the district set up a tented entertainment district along three blocks of Main Street for outdoor drinking and dining.

◼️ South Boulevard, aka SoBo, 10840 Maumelle Blvd., just east of Maumelle, was one of two Arkansas restaurants that chef Gordon Ramsay featured on his "24 Hours to Hell and Back" season finale Feb. 25 on Fox. But the "rescued" restaurant didn't survive even unto the airing of the show, which helps struggling restaurants by renovating their interiors and menus under Ramsay's guidance. It lost its liquor license Jan. 24 due to nonpayment of sales taxes. And the landlord changed the locks because of a considerable amount of unpaid rent. The Hangout Grill & Bar replaced it in mid-September.

DOWN BY THE RIVERSIDE

◼️ The Library Kitchen + Lounge opened right after the top of the year in the former Gusano's space, 313 President Clinton Ave., Little Rock. Cannibal and Craft, a nightclub and cocktail lounge and offshoot of a club with the same name on Dickson Street in Fayetteville, opened in late October next-door in the former Ernie Biggs location, 307 President Clinton Ave., with an upstairs tiki bar and a downstairs that resembles a classic British club.

◼️ The River Market location of Damgoode Pies, 500 President Clinton Ave., Little Rock, closed March 15. The location opened in 2015, the latest in a long series of brewpubs and restaurants to occupy that space, and has remained empty since. Damgoode Pies continues to operate its original location, 2701 Kavanaugh Blvd. in Little Rock's Hillcrest, and one at 6706 Cantrell Road in Little Rock's Pulaski Heights. Zeteo Coffee, 610 President Clinton Ave., closed in March.

◼️ Hill Station, 2712 Kavanaugh Blvd. in Little Rock's Hillcrest, opened in early February after a series of delays. Meanwhile, Canon Grill, 2811 Kavanaugh, closed in mid-March because of the pandemic and does not appear to have reopened. 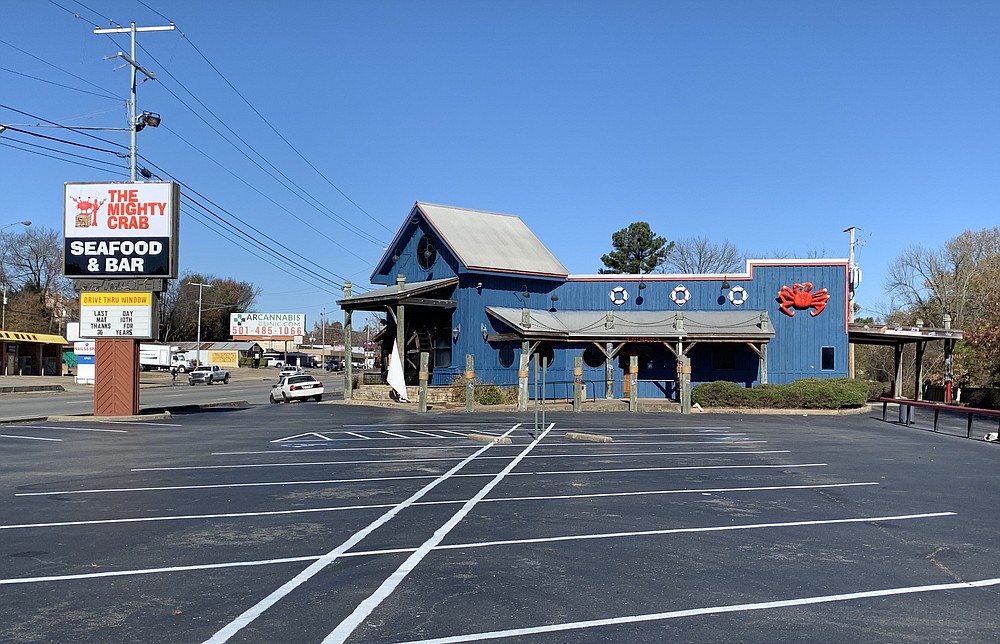 ◼️ Catfish City & BBQ Grill, 1817 S. University Ave., Little Rock, closed in May after more than 36 years of serving catfish and barbecue. The Mighty Crab, part of a Louisiana-based mini-chain, opened there in December. And yes, they kept the water wheel.

◼️ Construction, which stopped in March as the covid-19 crisis hit, has recently resumed on Henrietta's in the former Andina's space at 433 E. Third St., Little Rock. Co-owner and creative director Leila King, who owns and operates @ The Corner, 201 E. Markham St., Little Rock, with her sisters, Helen Grace King and the chef, Kamiya Merrick, is looking at installing a different concept, serving breakfast, lunch and possibly early dinner, with a more "health-centric" menu and cocktail program. We still don't have a timeline.

◼️ The Keet family's JTJ Restaurants is gearing up to open as many as 20 outlets in Arkansas and Oklahoma of Waldo's Chicken & Beer, a concept belonging to Nashville, Tenn.-based Fresh Hospitality, from which the Keets also franchise their eight Arkansas Taziki's Mediterranean Cafes. The first is expected to go into the former Johnny Carino's, 4221 Warden Road, North Little Rock (that's the service road that runs north to south along U.S. 67/167, "behind" McCain Mall), which closed in January.

◼️ It has been more than a year since we heard from the owners of Two Sisters, the Sherwood cafe (3130 E. Kiehl Ave.) and catering operation (3140 E. Kiehl Ave.), about a target to open a downtown Little Rock location, 201 N. Izard St., facing LaHarpe Boulevard.

◼️ We're expecting, possibly as early as February, the second Little Rock location (and Arkansas' 12th) of Tacos 4 Life in a new strip mall on the site of the former Mexico Chiquito, 13924 Cantrell Road, Little Rock.

◼️ Blame the pandemic for our not yet seeing Arkansas' first location of Pies and Pints, a pizza-and-craft-beer franchise-chain operation, going into the former Tavern location in the Promenade on Chenal, 17000 block of Chenal Parkway.

◼️ Also pending in Little Rock's South Main neighborhood, 1424 Main St.: the area's first outlet of the Atlanta-based Original Hot Dog Factory, due within the next couple of months, and Press Waffle Co., due in March.