Grown: How to get a marriage license in Arkansas + other wedding paperwork 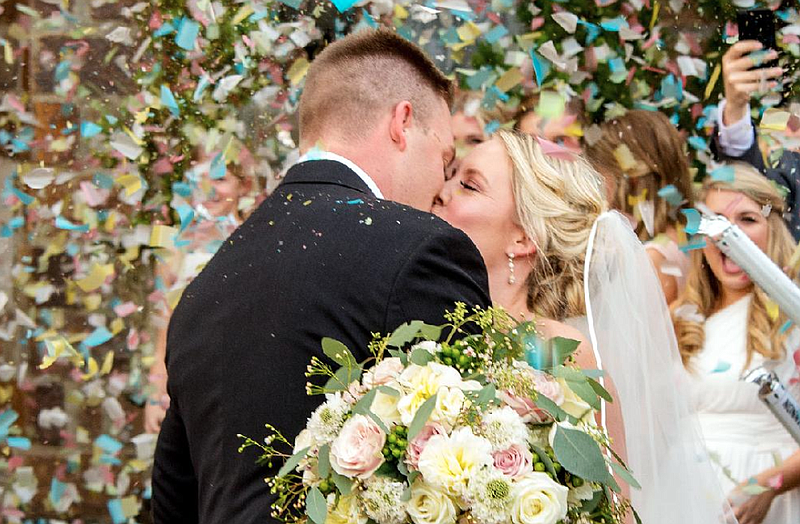 Arkansas Democrat-Gazette/CARY JENKINS The newlyweds kiss after being introduced at the reception and making their way through confetti shot into the air by the wedding party.

This story is a part of The Article, your guide to Arkansas news and culture, presented by the Democrat-Gazette. Sign up for The Article's twice-weekly newsletter here or go here to see stories that have appeared in past newsletters.

Here are the basics on wedding paperwork in Arkansas.

To get legally married in Arkansas, couples must obtain a marriage license. Licenses are issued via county clerks, and a spokeswoman for Terri Hollingsworth, Pulaski County Circuit and County clerk, said a license issued in one county is good for a marriage in any Arkansas county.

To get a license, couples can visit the clerk’s office (though protocols during the pandemic may be different than normal). Both individuals will need to bring identification such as a driver’s license, passport or state ID card.

The fee for a marriage license in Pulaski County is $60, according to Hollingsworth’s spokeswoman.

Licenses are only good for 60 days once they are issued, and by state law the license must be returned to the county from which it was issued by the end of the 60-day period, whether it has been used or not.

If a couple loses the license before returning it, the cost for a replacement in Pulaski County is $10.

If a license is not returned, the couple will owe the county $100, per state law.

Hollingswoth’s spokeswoman said in Pulaski County, a couple will receive a certified copy of the license, which acts as a certificate.

If a Pulaski County certificate is lost, a replacement is $5.

A newlywed who chooses to change their name will need to get an updated Social Security card. Instructions for that process are on the Social Security Administration website.

At a state level, once an individual has a new Social Security card, Department of Finance and Administration spokesman Scott Hardin said they can update their driver’s license or state ID.

For a name change on an existing standard state ID or driver’s license, Hardin said the marriage certificate is all that will be needed.

To update a name on a Real ID, an individual will need all the documents as if they’re getting a Real ID for the first time, Hardin said, plus the marriage certificate. Read more on Real ID and the documents needed to obtain one.

Aside from updating these government documents, an individual may also want to contact private institutions such as their bank or employer to update their name in the institutions’ records.