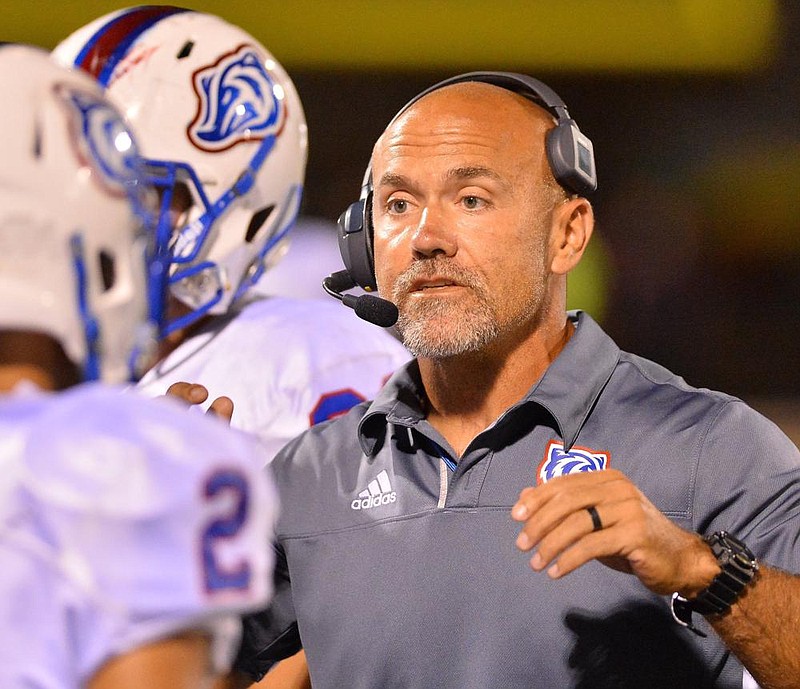 J.R. Eldridge is shown in this file photo. (Special to the Democrat-Gazette/JIMMY JONES)

J.R. Eldridge, who won multiple state championships at Arkadelphia and led North Little Rock to the Class 7A state title game in December, will be the new football coach at Farmington.

Eldridge will replace longtime Farmington Coach Mike Adams, who stepped down following the 2020 season after leading the Cardinals to the second round of the Class 5A state playoffs.

"I am grateful to Mr. [Jon] Laffoon, Coach [Beau] Thompson, and the interview committee for choosing me as the candidate who will be presented to the Farmington School Board for the head coach position at Farmington High School," said Eldridge in a news release issued by the school Monday afternoon. "I am excited about the opportunity to make a positive difference in the lives of players, compete for state and conference championships, and build lasting relationships within the Farmington community."

Eldridge was the head football coach at Arkadelphia from 2011-19, winning state championships in 2017 and 2018. The 2018 team was the first in state history to start a season 0-5 and finish with a state championship, knocking off No. 1 seeds in four consecutive weeks. The Badgers also advanced to the semifinals in 2015. Eldridge was selected as the Arkansas Democrat-Gazette Coach of the Year in 2018.

Eldridge also coached at Ouachita Baptist University, where he was the defensive coordinator from 2007-11 and was the linebackers coach from 2001-07. He was also the strength and conditioning coach for the Tigers from 2001-11.

"J.R. has won at every level and will be successful because he is a great leader," said Laffoon, the Farmington superintendent, in a news release Monday, "but more importantly, he is a developer of young people."

After graduating from Fayetteville, Eldridge played at OBU, where he served as defensive captain. He earned his bachelor's degree from OBU in 2001 and his master's degree from Henderson State University. He has three sons, Jack, 14; Max, 12; and Tripp, 6.

Laffoon said in the release that the opening drew more than 40 applicants. The Farmington School District Board will officially vote on the position at its Jan. 25 meeting.