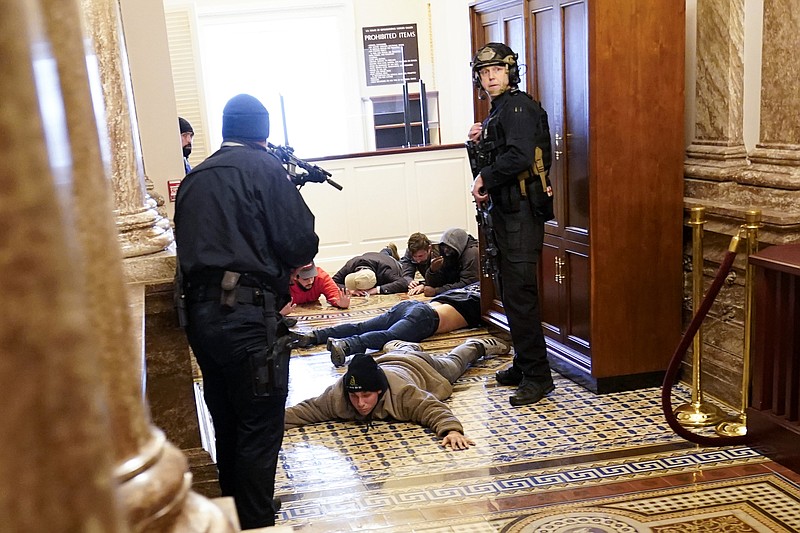 U.S. Capitol Police hold protesters at gun-point near the House Chamber inside the U.S. Capitol on Wednesday, Jan. 6, 2021, in Washington. (AP Photo/Andrew Harnik)

WASHINGTON -- Government officials must move swiftly to determine who was responsible for last week's attack on Capitol Hill and how they pulled it off, Republican U.S. Rep. French Hill of Little Rock said Monday.

Law enforcement agencies lacked the resources they needed to repel an attack, he said. The assault on the House and Senate did not appear to be spontaneous, he said.

"I would very much support a quick, prompt, thorough federal investigation about any level of premeditation and who is responsible for it and, equally, on the lack of preparedness," the 2nd District congressman said.

Some chanted "Hang Mike Pence," after the vice president said he could not intervene on Trump's behalf as the electoral votes were being tallied; the U.S. Constitution charges him with counting electoral votes, not choosing the winner.

A gallows, with a noose at the ready, had been erected near the Capitol.

After an afternoon of chaos and destruction inside the Capitol, law enforcement officials finally drove the mob out.

Sometime after 3:30 a.m. the next day, the counting finished. President-elect Joe Biden, with 306 of the 538 electors, was declared the winner.

"Based on the material I've read, the leadership of the House and Senate turned down National Guard requests from the Capitol Police and the D.C. mayor. And if that's true, then there's serious responsibility that rests at the top of the Capitol on that subject," Hill said.

A Capitol Hill police officer, Brian Sicknick, died Thursday, one day after reportedly being hit with a fire extinguisher. Officials have opened a homicide investigation into his death. Another officer committed suicide following the uprising.

"I think all of us ... were really stunned by the level of violence that we witnessed," Hill said.

Trump, who has been handing out pardons to close associates in recent weeks, should not show clemency to the insurrectionists, Hill said.

"I would oppose presidential pardons for people who broke the law and broke into the Capitol," he added.

U.S. Sen. Tom Cotton, R-Ark., has also stressed the importance of holding the insurrectionists accountable and would oppose any presidential pardons, a spokesman said.

U.S. Sen. John Boozman, R-Ark., "wants a full investigation that looks into the attack on the Capitol from every angle and he wants those responsible punished to the fullest extent of the law," Boozman spokesman Patrick Creamer said in a written statement. "The Senate has already announced a bipartisan inquiry into the security failures at the Capitol and law enforcement is aggressively pursuing, apprehending and charging those involved.

"He believes pardons for those who participated in the attack should not be considered under any circumstance," Creamer said, adding, "He is not in a position to speculate on impeachment at this time."

While House Democrats are preparing to impeach Trump a second time, Hill has warned against the approach.

"I think pursuing a hasty and jammed impeachment process with nine days away from an inauguration is not the ideal way to handle this matter. I think it only increases division and anxiety," he said.

"I believe Speaker Pelosi, Leader McConnell and President Trump and President-elect Biden need to work together ... towards a peaceful transition of power. That is the ideal thing this country should be engaged in this week," he said.

While Hill and Boozman were calling for swift investigations, Walmart was weighing how Wednesday's attack should affect its campaign giving.

Some corporations have already said they'll no longer donate money to lawmakers who attempted to subvert the Nov. 3 election results.

Both entities accepted the resignation of Adam Piper, the executive director, Monday, The Associated Press reported.

Asked about the donation, Walmart spokesman Randy Hargrove noted that past giving has been bipartisan.

The Bentonville-based retailer is concerned by what it saw on Wednesday, he said.

"At the end of every election cycle, we examine and adjust our political giving strategy. As we conduct our review over the coming months, we will certainly factor last week's events into our process," the statement concluded.

The state's junior senator is drawing praise on Capitol Hill for helping to squelch challenges to electoral slates in states Biden won.

"Senior Republicans are crediting Arkansas Sen. Tom Cotton's surprise break with President Trump for preventing a flood of his GOP colleagues from objecting to the certification," the Washington Examiner reported Monday.

His defense of the Electoral College and the U.S. Constitution came at a key moment, three days before the votes were scheduled to be tallied.

"He played a very important role, especially as people were starting to waver a little bit or reevaluate their position," U.S. Sen. John Thune, the majority whip from South Dakota, told the Examiner.