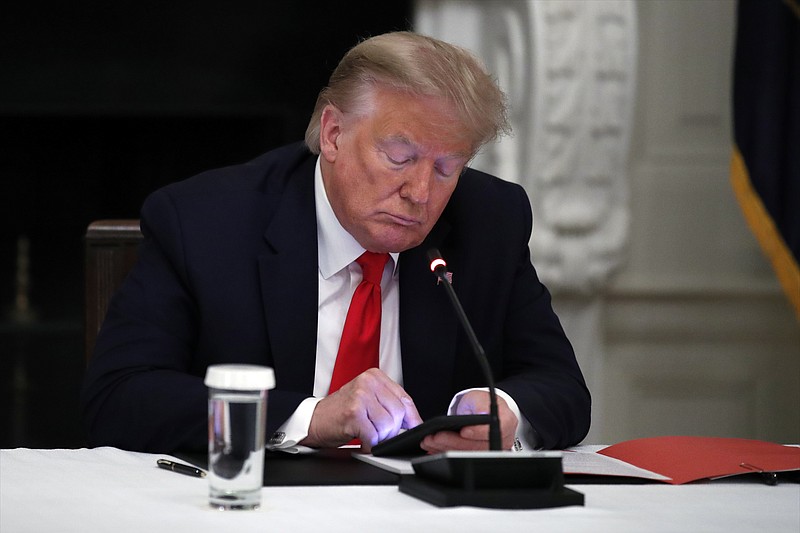 FILE - In this Thursday, June 18, 2020 file photo, President Donald Trump looks at his phone during a roundtable with governors on the reopening of America's small businesses, in the State Dining Room of the White House in Washington. (AP Photo/Alex Brandon, File)

Amazon, Twitter and other tech companies confronted fresh blowback Monday for banning President Donald Trump and taking action against a wide array of websites that had glorified the deadly riot at the U.S. Capitol last week.

Twitter's decision to remove Trump's account, citing the potential that his rhetoric might incite additional violence, precipitated a sharp drop in the company's shares. Twitter also braced for a potential protest outside its San Francisco headquarters, a demonstration that the president's supporters have sought to organize on pro-Trump forums in recent days.

Amazon, meanwhile, faced a new lawsuit from Parler, an alternative social network that had become a haven for Trump's backers. Amazon Web Services, which provides cloud computing services, suspended its relationship with Parler starting Monday in a move that removed it from the web -- prompting Parler to allege that Amazon had acted unlawfully.

Twitter shares lost 6.41% Monday after earlier dropping as much as 12.3%, reflecting fears of political retribution and financial fallout stemming from the company's decision. Amazon shares lost 2.15%.

The flurry of activity reflected the still-intensifying clash between Washington and Silicon Valley in the days since Trump's comments about the 2020 election helped spark a riot that forced the Capitol into lockdown and left five people dead.

[Video not showing up above? Click here to watch » https://www.youtube.com/watch?v=2Uy1cyNLFgM]

Late Friday, Twitter banned Trump, citing two tweets, including one that said he is not planning to attend President-elect Joe Biden's inauguration. Facebook earlier in the week said it was suspending Trump for at least two weeks. Sheryl Sandberg, the company's chief operating officer, said Monday that there are "no plans to lift" the ban.

On Monday, Facebook announced additional policy moves, including a new crackdown against posts that reference "stop the steal" -- a rallying cry for Trump and others who have sought to delegitimize the outcome of the 2020 race. Before Biden's swearing-in ceremony, Facebook said it also would maintain its pause on political ads and aim to monitor its service more aggressively for harmful content as it seeks to "stop misinformation and content that could incite further violence during the next few weeks," executives said in a blog post.

Other tech giants have joined Twitter and Facebook in taking action against the president and his allies in recent days amid mounting political tensions in the United States -- and growing fears about more deadly violence. Apple and Google removed Parler from their app stores in a move that further constrained the right-leaning service's reach. Joining Amazon, the tech giants each say Parler has not properly policed its platform for violent threats, an accusation Parler denies.

Trump responded to the Twitter ban with a statement late Friday promising to seek an alternate social network -- or build one of his own -- in an attempt to get around the vast digital blockade. Trump is expected to spend the final days of his presidency attacking Silicon Valley over allegations of censorship, according to a person familiar with the matter who spoke on the condition of anonymity to describe internal White House planning.

"We will not be SILENCED!" Trump said in the statement, which he previously had tried to tweet from the president's POTUS account before Twitter blocked it.

Twitter and its fellow tech giants deny the charges of censorship. The White House did not immediately respond to requests for comment.

Trump's supporters, meanwhile, took to a forum sympathetic to the president, called TheDonald.win, to express their own displeasure. Some users even called for the execution of House Speaker Nancy Pelosi, D-Calif., and other political figures, according to posts reviewed and compiled by the SITE Intelligence Group, which tracks online extremism.

Others encouraged a protest at Twitter's headquarters. "Maybe the hq should be burned down when everyone goes," wrote one user on a widely trafficked thread.

The company's employees are mostly working from home because of the pandemic.

A wide array of pro-Trump online communities, including TheDonald, had teemed with similar talk ahead of the riot at the Capitol last week -- and since then they have glorified the violence that took place in Washington. The National Guard is set to deploy up to 15,000 troops during the inauguration in response to the heightened threats.

As users online lashed out, Parler filed a new lawsuit against Amazon that alleges the company acted anticompetitively and hypocritically in choosing to suspend it. Twitter also hosted violent threats, according to lawyers from Parler, who asked a judge to grant a temporary restraining order to prevent Amazon "from shutting down Parler's account."

"Doing so is the equivalent of pulling the plug on a hospital patient on life support," the lawsuit contends. "It will kill Parler's business -- at the very time it is set to skyrocket."

Meanwhile, a growing number of Wall Street banks and businesses have cut ties with Trump's campaign and financial arms, as well as the broader Republican Party.

The financial technology company Stripe has stopped processing payments for the Trump campaign, according to a person familiar with the matter who requested anonymity because the decision hasn't been made public.

The move will cut off Trump's fundraising arm from what has been a steady stream of small-dollar donations that are often solicited through emails and text messages. In the days after the election, Trump's campaign raised tens of millions of dollars promising to use the money toward fighting the results of the election. That money largely appears to have gone into Trump's broader political action committee.

American Express and JPMorgan Chase have said they would no longer donate to candidates who supported last week's insurrection or did not vote to confirm Biden's victory in the Electoral College. Goldman Sachs is also holding back on political donations, said a source at the firm who is not authorized to speak publicly on the matter.

"Last week's attempts by some congressional members to subvert the presidential election results and disrupt the peaceful transition of power do not align with our [values]," American Express CEO Steve Squeri said in an email to employees.

Citigroup confirmed Sunday that it is pausing all federal political donations for the first three months of the year.

In a memo to employees Friday, Citi's head of global government affairs, Candi Wolff, said "we want you to be assured that we will not support candidates who do not respect the rule of law."

It was a roller coaster of activity for Parler, a 2-year-old magnet for the far right that welcomed a surge of new users and became the No. 1 free app on iPhones late last week, after Facebook, Twitter and other mainstream social media platforms silenced Trump's accounts.

The wave of Trump followers flocking to the service was short-lived as the plug was pulled.

Parler CEO John Matze decried the punishments as "a coordinated attack by the tech giants to kill competition in the marketplace."

Parler's lawsuit in a Seattle-based federal court makes the argument that Amazon violated antitrust laws to harm Parler and help Twitter. It also alleges Amazon breached its contract by not giving 30 days' notice before terminating Parler's account. Amazon and Parler did not return requests for comment Monday.

Matze has signaled there is little chance of getting Parler back online anytime soon after "every vendor, from text message services, to e-mail providers, to our lawyers all ditched us too on the same day," he told Fox New Channel's "Sunday Morning Futures."

In a Monday interview with Fox Business, he said the company "may even have to go as far as buying and building our own data centers and buying up our own servers."

Trump may also launch his own platform. But that will not happen overnight, and free speech experts anticipate growing pressure on all social media platforms to curb incendiary speech as Americans take stock of the violent takeover of the Capitol.

Organizers of pro-Trump forces are already regrouping in other forums, such as the conservative-friendly social media site Gab, as new actions are planned ahead of Biden's inauguration.

"Gab and Parler are like hastily put together and less easy-to-use versions of Twitter and Facebook," said Graham Brookie, director of the Atlantic Council's Digital Forensic Research Lab, which has investigated the online organizing leading up to the Capitol assault. "They've got notoriety as ultimate free speech sites where you can say literally whatever you want even if it's unlawful or egregious."

Meanwhile, a group of digital "hactivists" salvaged much of what happened on Parler before it went offline and said they plan to put it into a public archive. One described the operation on Twitter as "a bunch of people running into a burning building trying to grab as many things as we can."

The effort to download and archive posts, including image files that can be tied to geographic locations, has instilled some fear in Parler users, though law enforcement might have been able to access the data anyway, and experts said the archive does not include information that was not publicly accessible. The cache of data is not yet easily readable by nonexperts.

"If this wasn't done, we would only have fragments and scraps of the information that was on Parler before the takedown," said Gabriella Coleman, an anthropologist at McGill University who has studied hacker movements. "It's important because these forums are increasingly where people come together to organize themselves. You learn about motivations, ideological tactics."

Coleman said Trump loyalists are likely to find other ways to communicate, such as encrypted messaging apps or old-fashioned email lists, but only if they already know where to find like-minded groups.

Cutting off Parler removes a key recruitment tool for various groups that are connected by Trump's misinformation about the presidential election, Brookie said.

"Parler has been particularly good at bringing more audience into this collective delusion," he said.

​​​​​Information for this article was contributed by Tony Romm, Craig Timberg and Elizabeth Dwoskin of The Washington Post; and by Matt O'Brien, Barbara Ortutay, Frank Bajak and Ken Sweet of The Associated Press. 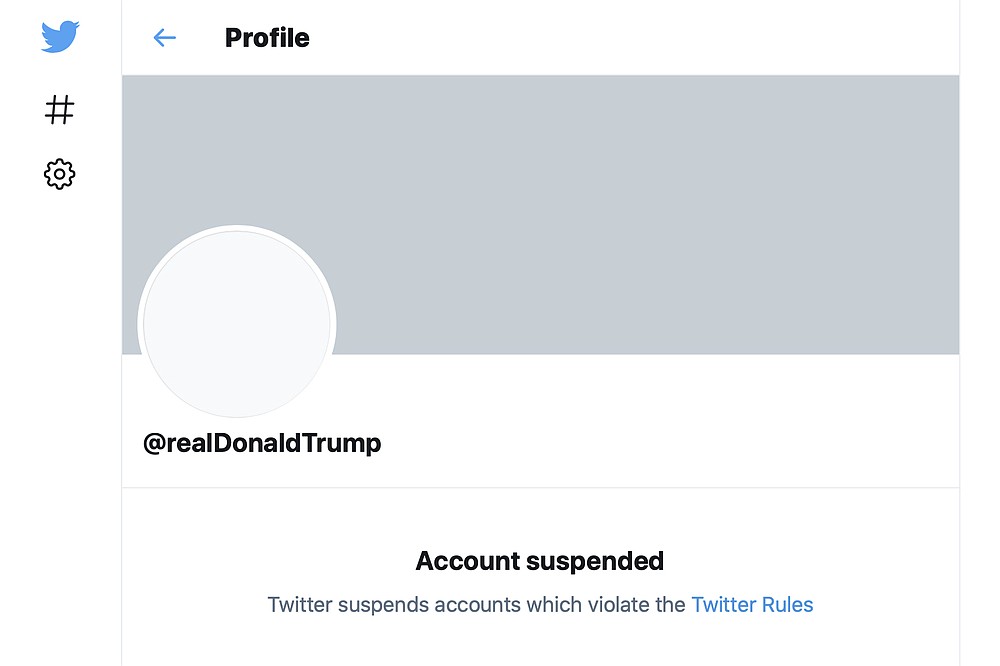