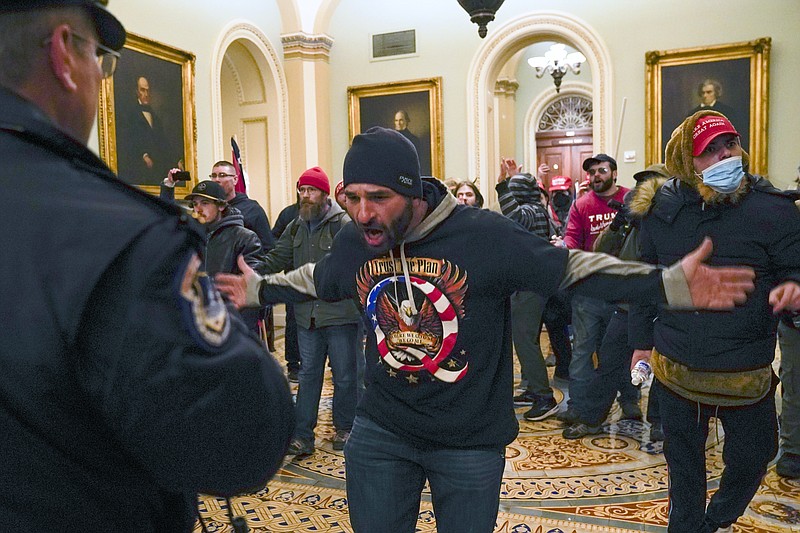 FILE - In this Jan. 6, 2021, file photo, Trump supporters gesture to U.S. Capitol Police in the hallway outside of the Senate chamber at the Capitol in Washington. Doug Jensen, an Iowa man at center, was jailed early Saturday, Jan. 9, 2021 on federal charges, including trespassing and disorderly conduct counts, for his alleged role in the Capitol riot. Jensen, 41, of Des Moines, was being held without bond at the Polk County Jail and county sheriff's Sgt. Ryan Evans said he didn’t know if Jensen had an attorney. (AP Photo/Manuel Balce Ceneta, File)

Records show that some were armed and included convicted criminals, such as a Florida man recently released from prison for attempted murder.

The Associated Press reviewed social media posts, voter registrations, court files and other public records for more than 120 people either facing criminal charges related to the Jan. 6 unrest or who, going maskless amid the pandemic, were later identified through photographs and videos taken during the melee.

Some right-wing pundits and Republican officials such as Rep. Matt Gaetz, R-Fla., have claimed that the violence was perpetrated by members of antifa rather than supporters of the president.

"If the reports are true," Gaetz said on the House floor just hours after the attack, "some of the people who breached the Capitol today were not Trump supporters. They were masquerading as Trump supporters and, in fact, were members of the violent terrorist group antifa."

Steven D'Antuono, the assistant director in charge of the FBI's Washington field office, told reporters that investigators had seen "no indication" antifa activists were disguised as Trump supporters in Wednesday's riot.

The AP found that many of the rioters had taken to social media after the November election to retweet and parrot claims by Trump that the vote had been stolen. Several had openly threatened violence against Democrats and Republicans they considered insufficiently loyal to the president. During the riot, some livestreamed and posted photos of themselves at the Capitol. Afterwards, many bragged about what they had done.

So far, at least 90 people have been arrested on charges ranging from misdemeanor curfew violations to felonies related to assaults on police officers, possessing illegal weapons and making death threats against House Speaker Nancy Pelosi, D-Calif.

Among them was Lonnie Leroy Coffman, 70, an Alabama grandfather who drove to Washington to attend Trump's "Save America Rally" in a red GMC Sierra pickup packed with an M4 assault rifle, multiple loaded magazines, three handguns and 11 Mason jars filled with homemade napalm, according to court filings. He was arrested carrying a 9mm Smith & Wesson handgun and a .22-caliber derringer pistol in his pockets.

His grandson, Brandon Coffman, told the AP on Friday his grandfather was a Republican who had expressed admiration for Trump at holiday gatherings. He said he had no idea why Coffman would show up in the nation's capital armed.

Also facing federal charges is Cleveland Grover Meredith Jr., a Georgia man who in the wake of the election had protested outside the home of Republican Gov. Brian Kemp, whom Trump had publicly blamed for his loss in the state. Meredith drove to Washington last week for the "Save America" rally but arrived late because of a problem with the lights on his trailer, according to court filings that include expletive-laden texts.

"Headed to DC with a s ton of 5.56 armor-piercing ammo," he texted friends and relatives on Jan. 6, adding a purple devil emoji, according to court filings. The following day, he texted to the group: "Thinking about heading over to Pelosi C's speech and putting a bullet in her noggin on Live TV." He once again added a purple devil emoji, and wrote he might hit her with his truck instead. "I'm gonna run that C Pelosi over while she chews on her gums. ... Dead B* Walking. I predict that within 12 days, many in our country will die."

A participant in the text exchange provided screenshots to the FBI, who tracked Meredith to a Holiday Inn a short walk from the Capitol. They found a compact Tavor X95 assault rifle, a 9mm Glock 19 handgun and about 100 rounds of ammunition, according to court filings. The agents also seized a stash of THC edibles and a vial of injectable testosterone.

Meredith is charged with transmitting a threat, as well as felony counts for possession of firearms and ammunition.

Michael Thomas Curzio was arrested in relation to the riots less than two years after he was released from a Florida prison in 2019. He had served eight years for attempted murder.

FBI ON HUNT FOR RIOTERS

Federal law enforcement officials vowed Friday to bring additional charges against those who carried out the attack on the Capitol, launching a nationwide manhunt for dozens of suspects identified from photographic evidence.

The FBI has opened a murder probe into the death of Capitol Police Officer Brian Sicknick, who was hit in the head with a fire extinguisher, according to law enforcement officials who spoke on the condition of anonymity because they were not authorized to discuss the ongoing investigation publicly.

The Trump supporters who died in the riot were Kevin Greeson, 55, of Athens, Ala.; Benjamin Philips, 50, of Ringtown, Pa.; Ashli Babbitt, 35, of San Diego; and Rosanne Boyland, 34, of Kennesaw, Ga.

Boyland's sister told the AP on Friday she was an adherent of the QAnon conspiracy theory that holds Trump is America's savior. Her Facebook page featured photos and videos praising Trump and promoting fantasies, including one theory that a shadowy group was using the coronavirus to steal elections. Boyland's final post on Twitter -- a retweet of a post by White House social media director Dan Scavino -- was a picture of thousands of people surrounding the Washington Monument on Wednesday.

The AP's review found that QAnon beliefs were common among those who heeded Trump's call to come to Washington.

Doug Jensen, 41, was arrested by the FBI on Friday in Des Moines, Iowa, after returning home from the riot. An AP photographer captured images of him confronting Capitol Police officers outside of the Senate chamber on Wednesday.

Jensen was wearing a black T-shirt emblazoned with a large Q and the phrase "Trust The Plan," a reference to QAnon.

Jensen's older brother, William Routh, told the AP on Saturday that Jensen believed that the person posting as Q was either Trump or someone very close to the president.

"I feel like he had a lot of influence from the internet that confused or obscured his views on certain things," said Routh, of Clarksville, who described himself as a Republican Trump supporter. "When I talked to him, he thought that maybe this was Trump telling him what to do."

Information for this article was contributed by Jake Bleiberg, Michael R. Sisak, Michael Balsamo, Rebecca Boone, and Heather Hollingsworth of The Associated Press. 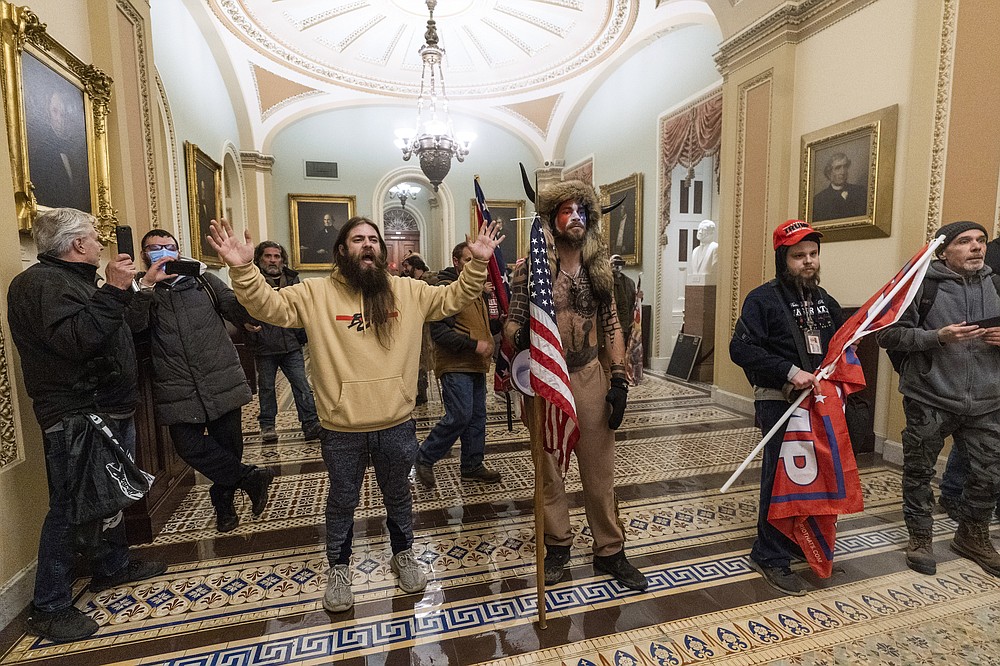 FILE - In this Wednesday, Jan. 6, 2021 file photo supporters of President Donald Trump are confronted by U.S. Capitol Police officers outside the Senate Chamber inside the Capitol in Washington. Jacob Anthony Chansley, the Arizona man with the painted face and wearing a horned, fur hat, was taken into custody Saturday, Jan. 9, 2021 and charged with counts that include violent entry and disorderly conduct on Capitol grounds. (AP Photo/Manuel Balce Ceneta, file) 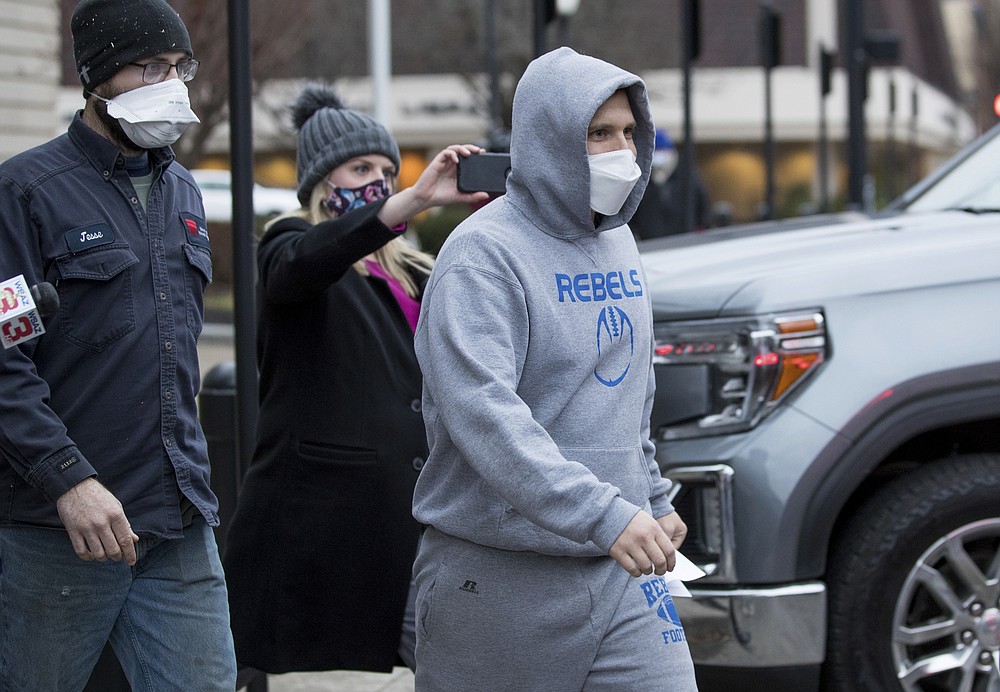 West Virginia Delegate Derrick Evans exits the Sidney L. Christie U.S. Courthouse and Federal Building after being arraigned on federal charges Friday, Jan. 8, 2021, in Huntington, W.Va. Evans, a West Virginia state lawmaker who posted videos online showing himself pushing his way inside the Capitol, was arrested Friday by the FBI at his home and charged with entering restricted federal property. Evans, who faced bipartisan calls for him to step down, submitted a letter of resignation Saturday, Jan. 9, 2021 to West Virginia Gov. Jim Justice and apologized for his actions. (Sholten Singer/The Herald-Dispatch via AP)
ADVERTISEMENT