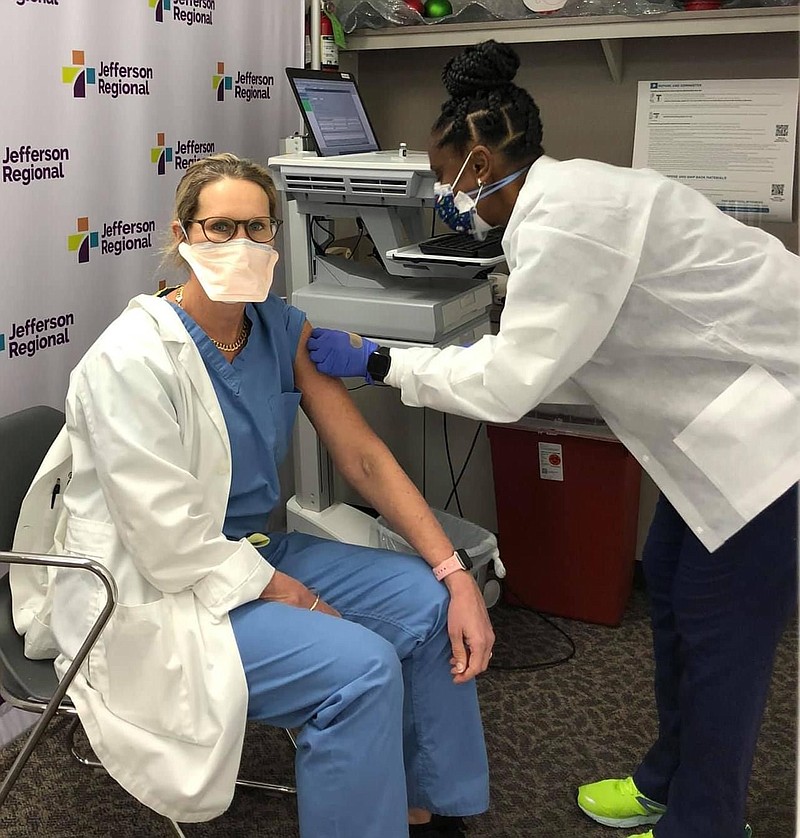 Jefferson Regional will set up an online site where people who fall into Phase 1B can get on a waiting list for receiving the covid-19 vaccine. Shown here is Dr. Amy Cahill, the hospital's chief of staff, receiving a vaccine from Tena Brooks, a licensed practical nurse. (Submitted photo)

Jefferson Regional Medical Center is close to finishing the first phase of giving covid-19 vaccines and will start this week to take names for the second phase, hospital officials said Monday.

Wendy Talbot, chief experience officer, said the hospital is almost through administering shots to those who fall into the Phase 1A category, which includes medical workers and first-responders.

Once the shots have been given to everyone in that category who wants them, Jefferson Regional will be ready to proceed to Phase 1B. That category includes people 70 and older, teachers and school staff, food and agricultural workers, firefighters and police workers who were not included in Phase 1A, and workers employed in manufacturing, grocery stores, transit, child care and the Postal Service as well as essential government workers, according to the Arkansas Health Department.

To prepare to give the Phase 1B vaccines, Talbot said, the hospital will have a link on its website for people to use to get on a waiting list. The waiting list will then be used to make appointments for individuals.

Talbot said from her read on what's going on in the state, Jefferson Regional is ahead of other parts of the state in getting Phase 1A shots administered. That means that while Jefferson Regional may be close to being able to start the second phase of shots, the hospital will have to wait for the vaccines to be shipped in order to start administering shots to Phase 1B individuals.

The health department's estimate for when Phase 1B shots will start sometime in February, although Talbot said hospital officials were hoping the start would be sooner.

Talbot said the entire staff at Jefferson Regional is pleased with how well the first phase of shots has gone and is eager to tackle this new population of individuals.

"It went really well," she said. "We're about finished with Phase 1A. It was very smooth and organized. So that's the plan for Phase 1B."

Jefferson Regional got close to a thousand doses of the Pfizer-BioNTech vaccine in mid-December. Talbot said 847 people received the first dose, and of that first group, 661 have received a second dose. And more vaccines are on the way.

The Pfizer vaccine is more difficult to handle for medical professionals. It has to be kept at very low temperatures and has a shorter shelf life than the Moderna vaccine, which can be kept at temperatures found in a refrigerator or freezer. The Moderna vaccine, consequently, is a better choice of nursing home use, since those facilities don't have equipment that can handle the Pfizer vaccine. Talbot said it is her understanding that nursing home residents are in the process of being given the shots by other organizations.

"As more and more people have gotten the shots and not had any bad reactions to them, there is much greater interest now in getting them," Talbot said.

She said since the December rollout, the hospital has gotten a daily influx of calls from the general public asking when they will be able to get the shots. The online sign-up was in response to that situation.

"We are trying to get ahead of the curve," she said. "We will be able to get everyone on a schedule, and whenever the health department allows us to start the Phase 1B shots, we'll be ready." 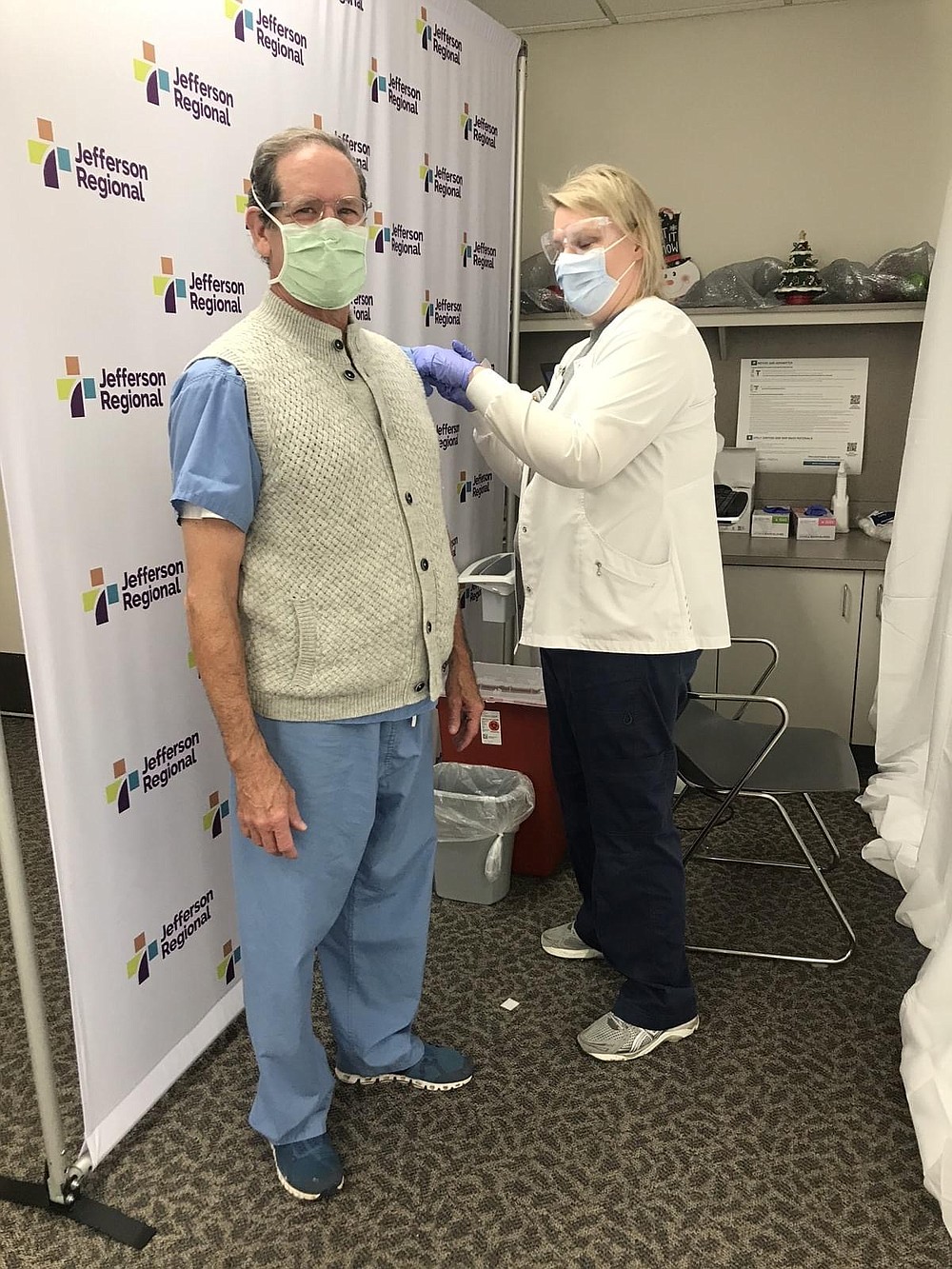 Jefferson Regional is ahead of schedule in administering vaccine shots to Phase 1A individuals and will be ready for Phase 1B as soon as the health department gives the OK. Shown here, Dr. Reid Pierce is receiving a vaccine shot from Jodie Howell, a registered nurse. (Submitted photo)
ADVERTISEMENT