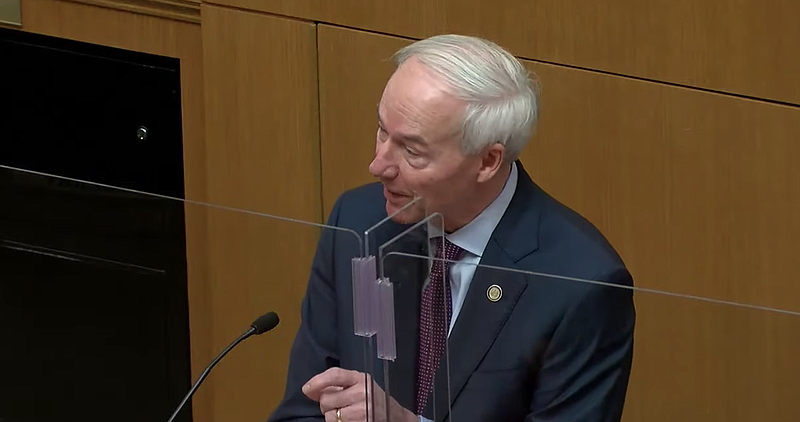 Gov. Asa Hutchinson speaks Tuesday in the House chambers at the state Capitol in Little Rock in this still of video provided by the governor's office.

In his final State of the State address before the Arkansas Legislature during a regular session on Tuesday, Gov. Asa Hutchinson urged lawmakers to uphold his covid-19 emergency declaration and to pass hate-crimes legislation.

Hutchinson said it was the first responsibility of lawmakers during the 2021 session to act on the public health emergency.

"We must not be faint of heart, but we must keep fighting and not call for retreat as some would advocate," he said, adding that he trusted that legislators would affirm the emergency order, which is tied to rules about telemedicine, educational waivers, immunity liability for business and healthcare workers and other measures.

"The only way we can come together on this issue is to listen to each other and step into other shoes that are in a different world than ours," he said.

Hutchinson's agenda for the session, which kicked off Monday, also includes increasing teacher salaries by $2,000 annually and expanding access to high-speed internet in all areas of the state.

Hutchinson, a term-limited Republican, leaves office in 2023. He gave his speech in the House chambers at the state Capitol, with members of the state Senate watching the livestream from their chamber due to the pandemic.

[Video not showing up above? Click here to view » https://www.youtube.com/watch?v=0yemeWXJ588]

CORRECTION: Gov. Asa Hutchinson gave his final State of the State address before the Arkansas Legislature during a regular session on Tuesday. He leaves office in 2023. An earlier version of this story incorrectly described the address and the year Hutchinson leaves office.

This story has been updated. It was originally published at 8:11 a.m.