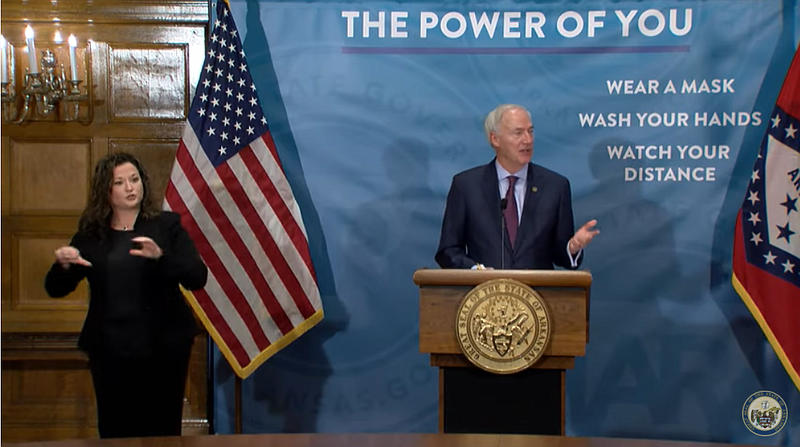 The move will expand the state's vaccination efforts, which have so far focused on health care workers, staff and residents of long term care facilities and police and firefighters who are first responders.

"The reason for this is we want to continue to increase as fast as we can getting these doses into the arms of Arkansans and at the same time being able to manage the limited supply that we're given," Hutchinson said.

Hutchinson made the announcement as the state's count of coronavirus cases rose by 3,209, a smaller increase than the 4,107 cases that were added the previous Tuesday, Jan. 5.

After reaching a new high a day earlier, the number of people hospitalized in the state with covid-19 fell by 17, to 1,354.

Those patients included 251 who were on ventilators, down from a record 268 a day earlier.

The state's death toll from the virus, as tracked by the Department of Health, rose by 40, to 4,121.

Hutchinson said more than 400,000 Arkansans will become eligible for the vaccine as the state expands its efforts on Monday.

The state has about 311,000 people who are age 70 or older and 132,000 who work in education, including elementary and secondary education and higher education institutions, he said.

He said older Arkansans should call a participating pharmacy to schedule an appointment. A list of the pharmacies can be found through the Health Department's website, healthy.arkansas.gov.

School districts should contact one of the department's local health units or a pharmacy or other provider to schedule a vaccination clinic for their employees, he said.

School employees should contact their district for information on how to get the vaccine, he said.

Arkansas is on phase 1A of its vaccination plan and the expansion on Monday will make the shots available to some people who are in 1B.

Other members of 1B, including grocery store workers, workers in manufacturing and other front-line essential workers, will become eligible for the shots later, Hutchinson said.

The cases added Tuesday included 2,095 that were confirmed through polymerase chain reaction, or PCR, tests.

The other 1,114 were "probable" cases, which include those identified through less-sensitive antigen tests.

The number of cases that were considered active rose by 168, to 25,702, as new cases outpaced recoveries.

The total number of coronavirus cases reported in Arkansas remained at 256,344 Tuesday morning, according to a state website. The death toll remained at 4,081.

[Video not showing up above? Click here to view » https://www.youtube.com/watch?v=y5gfGN8caHM]