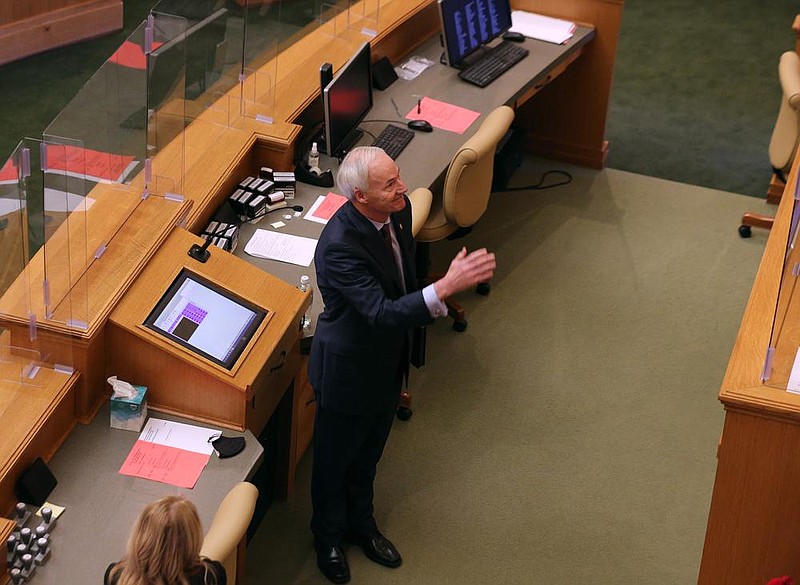 Gov. Asa Hutchinson waves to Speaker of the House Matthew Shepherd after finishing the State of the State Speech to a virtual joint session of the General Assembly on Tuesday, Jan. 12, 2021, at the state Capitol in Little Rock. (Arkansas Democrat-Gazette/Thomas Metthe)

Gov. Asa Hutchinson on Tuesday called on Arkansas lawmakers to affirm his declaration of a public health emergency by Feb. 27 and set a goal of increasing the average salary of teachers by $2,000 during the next two years.

During the coronavirus pandemic, Hutchinson delivered his State of the State speech in the House of Representatives' chamber with its members in their seats, while senators watched on a television monitor in their chamber.

The governor thanked lawmakers for authorizing through the Legislative Council in the past several months the development of a grant program for small businesses; enhanced unemployment benefits and additional funds for food and rental assistance; and the building of a health care infrastructure to fight the coronavirus.

"Now, it is not the time to withdraw from the battle," Hutchinson said. "We must not be faint of heart, but we must keep fighting and not call for retreat as some would advocate."

On Dec. 29, the governor extended his emergency declaration for the pandemic for another 60 days.

[Video not showing up above? Click here to watch » https://www.youtube.com/watch?v=0yemeWXJ588]

Hutchinson said Tuesday that current emergency rules are in place until Feb. 27.

"Prior to that date, you need to act," he said. "I trust you will both affirm the emergency and continue the emergency rules that have proven necessary during this health care crisis."

"If you do not act, these measures will end," he warned.

Afterward, House Speaker Matthew Shepherd, R-El Dorado, said, "I think that I plan on having some further discussion with the governor's office in terms of what specifically he's asking us to do with regard to affirming that."

"I'm positive that it's gonna get pushed through," Rep. Brandt Smith, R-Jonesboro, said.

"The governor will get a victory on that, but that's another one of those issues where a lot of legislators want to kind of rein in some of the emergency orders that continually roll," he said. "We want to see the Legislature brought in to the decision making, and we've been sidestepped a lot, and many of our constituents are very upset that we haven't been at the table on those discussions, and so we're just going to have to wait and see."

Sen. Kim Hammer, R-Benton, said he is in the midst of negotiations with Hutchinson regarding Hammer's draft bill that would, among other things, require the Legislature within 15 days to consider affirming the governor's statewide declaration of an emergency, and the Legislative Council to consider every 30 days whether to continue the emergency.

Hammer said he is "just trying to be a good team player and make sure that we can go into something [the governor] either supports or doesn't oppose, but without compromising what many legislators feel we need."

"We had a really good productive meeting Friday," he said. "I think we are going to get there. It is just on a subject like this it takes a lot of talking and that's what we are doing."

Hutchinson also asked the General Assembly to approve appropriations to allow federal coronavirus relief funds to be spent on getting vaccines faster and into the arms of more Arkansans.

"We need Health Department infrastructure to coordinate and administer the coronavirus vaccines," he said. "We need a continued investment in testing. We need stable funding for contact tracing and support for our K-12 education and higher education."

Hutchinson said he supports another round of increased pay for teachers, and his goal is to raise the average teacher salary by $2,000 over the next two years.

"You have already signaled your support to raise teacher pay. You have paved the way. You have led the way and we can work together to accomplish this goal," he said.

Department of Education spokeswoman Kim Mundell said Tuesday night that the average teacher salary in fiscal 2020 for traditional school districts and open-enrollment charter schools in Arkansas as reported by the National Teacher Association was $49,822 a year.

The cost to implement the governor's proposal in the first year has been calculated at $25 million, she said. This amount would need to be recalculated every two years depending on the average teacher salary target and which districts may qualify, she said.

The money would be allocated to schools below the target average salary and distributed on the basis of $185 per student in those districts, she said.

"We still need to see where the money's coming from," he said. "I know there's some talk about taking money out of what we'd already presented to the schools from the adequacy fund for the next biennium, and I probably would want to see that and how he's going to do it, but I don't want to steal money from something we already set up."

She said she agrees with the governor's goal.

"I think the approach has to be refined, so that we are not continuing the gap but trying to close the gap," she said.

Hutchinson also said he wants legislation enacted to require a computer science course as a high school graduation requirement. The state will have to increase training for teachers even more, but "we are ready to do it because it gives our young people even greater opportunities right here in Arkansas," he said.

"Today, despite the crosswinds of a national economy that is struggling, we are beginning this session in the best budget position in more than a decade," Hutchinson said.

The state has an unallocated surplus of more than $200 million, from before fiscal 2021, and has exceeded the general revenue forecast by more $300 million during the first six months of fiscal 2021, he said. Fiscal 2021 started July 1.

"The state of our state finances is strong and our state budget reflects a resilient state economy in which the private sector continues to create jobs," Hutchinson said. "We are still all determined to come through this health care crisis stronger and more hopeful than ever."

Hutchinson said he has set aside $30 million of surplus funds in his proposed budget to expand high-speed internet into rural areas.

Hutchinson said the state has lowered individual income taxes, fully funded K-12 education, increased funding for higher education and created the long-term reserve fund because of "our measured approach and our emphasis on private sector growth."

"Now we are poised to do more," he said.

Hutchinson said he proposed setting aside $100 million of the $240 million surplus for the state's long-term reserve fund, which he describes as a savings account, and $50 million a year for tax cuts for low- and middle-income Arkansans.

"Let's work together to determine the best way to get this done," he said.

Hutchinson said he wants lawmakers to reduce the sales tax from 6.5% to 3.5% for used vehicles priced between $4,000 and $10,000 and give relief to thousands of Arkansans who depend on used vehicles for getting to work and school.

"But to pay for tax cuts, we need to continue to grow our economy and bring people to Arkansas," he said. "If we can lower our [top income] tax rate for new residents [from 5.9%] to 4.9% for five years, then we will attract new Arkansans who will create jobs, spend money and pay taxes."

The governor said he knows that because the state has already done so.

Lowering the top rate to 4.9% for new residents "sets a goal for us as well to lower our tax rate in a similar way for all citizens, and, if we don't get there, the tax break for new residents will sunset," Hutchinson said.

"I have not felt any type of consensus from the Senate for that," Hickey said of lowering the income rate for new residents.

For example, he said the state should boost funding for catastrophic occurrences in public schools and consider lowering class sizes for teachers in kindergarten through third grade.

"When they breached our Article 1 branch of government, they attacked the foundations of our democracy. And let me say clearly, that each person who breached the heart of our democracy must be prosecuted to the full extent of the law," said Hutchinson, who is a former 3rd District congressman, federal Homeland Security undersecretary and U.S. attorney.

He said a presidential election often divides the nation along political and cultural lines, and he understands the passion.

"It is OK to be passionate, but we must not allow passion to cloud our common sense and our commitment to our state and nation," Hutchinson said. "And when the election is over, then we need to come together, united to strengthen our democracy and heal our land."

He asked state lawmakers how they wanted historians to remember this regular session.

"Will it be one that brought people together or did we just add more fuel to the flames of division?" Hutchinson asked. "We all have our political principles and conviction, and we dare not abandon those. But we can still find solutions and ways to work together for the common good."

He said some people predict that this year's regular session will be acrimonious and accomplish little.

"I wholeheartedly disagree with that assessment," Hutchinson said. "I expect us to meet the challenge of the moment and to pass legislation that will give our health care workers and the public the tools needed to defeat the coronavirus."

He said he expects legislation to be enacted that will boost the state's economy and other laws passed to ensure police officers have the highest standards and are fully trained, funded and supported, as well as laws to increase accountability and oversight.