Billionaire a big funder of Republicans, supporter of Israel by The Associated Press | January 13, 2021 at 4:58 a.m. 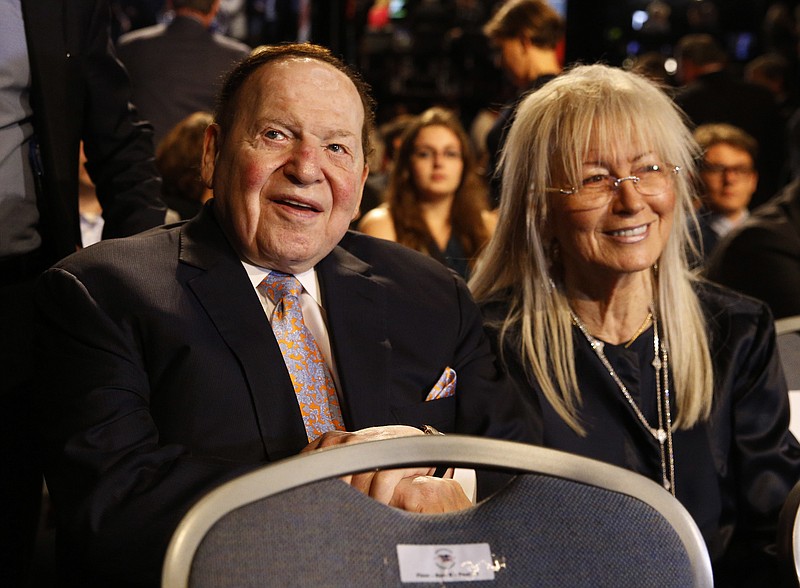 LAS VEGAS -- Sheldon Adelson, the billionaire mogul, Republican mega-donor and power broker who built a casino empire spanning from Las Vegas to China and became a singular force in domestic and international politics, has died after a long illness.

He was the son of Jewish immigrants raised in a Boston tenement who became one of the world's richest men. The chairman and CEO of the Las Vegas Sands added singing gondoliers to the Vegas Strip and foresaw the same potential in Asia. Forbes ranked him No. 19 in wealth in the U.S., worth an estimated $29.8 billion.

"If you do things differently, success will follow you like a shadow," he said during a 2014 talk to the gambling industry in Las Vegas.

Blunt yet secretive, the squatly built Adelson became one of the nation's most influential GOP donors by setting records for individual contributions.

In 2012, Politico called him "the dominant pioneer of the super PAC era."

Adelson hosted the party's top strategists and candidates at his modest office wedged among the casinos of the Las Vegas Strip.

He helped ensure that uncritical support of Israel became a pillar of the GOP platform, never more visibly than when the Trump administration moved the U.S. embassy from Tel Aviv to Jerusalem in 2018. Just weeks ago, Adelson provided a private plane for Jonathan Pollard, a former U.S. intelligence analyst who spent 30 years in prison for spying for Israel, to move to Israel after his parole ended.

When asked at a gambling conference what he hoped his legacy would be, Adelson said it wasn't his glitzy casinos or hotels but his impact in Israel. He was closely aligned with the conservative Likud party and funded a widely read free daily newspaper called Israel Hayom, or Israel Today.

In the U.S., Adelson helped underwrite congressional trips to Israel, helped build a new headquarters for the lobbying group the American Israel Public Affairs Committee and later was a top supporter of the Israeli-American Council.

Israeli Prime Minister Benjamin Netanyahu said Tuesday that Adelson "will forever be remembered" for his work strengthening ties between the U.S. and Israel.

Adelson was a late bloomer in business and in politics. He didn't become a casino owner, or a Republican, until well into middle age. Through the 1990s and after his wealth soared, his engagement in politics intensified. He was a supporter of President George W. Bush and backed Republican Rudolph Giuliani for the 2008 presidential race, before turning to the eventual candidate, Sen. John McCain, who lost to Barack Obama.

Adelson's leverage grew considerably in 2010 after the Supreme Court's Citizens United decision lifted many restrictions on individual campaign contributions. He and his wife spent more than $90 million on the 2012 election, funding presidential candidate Newt Gingrich and later Mitt Romney.

"I'm against very wealthy people attempting to or influencing elections," he told Forbes magazine in 2012. "But as long as it's doable I'm going to do it."

Adelson came around slowly to Trump, who ridiculed Adelson's support for Sen. Marco Rubio of Florida. But after Trump's surprise victory, the new president spoke often with Adelson and embraced his hard-line views on the Middle East.

Adelson, in turn, aided Trump financially, including $5 million for his inauguration, and supported him through his media holdings. Late in 2015, Adelson secretly purchased the Las Vegas Review-Journal -- the paper's own reporters revealed he was the new owner. Some longtime staff members left in protest.

Adelson, who contributed more than $100 million to the 2018 off-year elections, held extraordinary power among Republicans even though he didn't always agree with them.

In a 2012 interview with The Wall Street Journal, he called himself "basically a social liberal," who supported abortion rights and was supportive of immigrant rights. He cited taxes and differences over Israel as major reasons for leaving the Democratic Party.

He and his first wife, Sandra, were divorced in 1988. Three years later, he married Miriam Farbstein-Ochshorn, an Israeli-born doctor he met on a blind date and whom many believe helped deepen his involvement with Israel. Their honeymoon trip to Venice inspired Adelson to raze the historic Sands hotel-casino, once a favorite hangout for Frank Sinatra among others, and replace it with a pair of huge complexes: The Venetian and The Palazzo.

[Video not showing up above? Click here to watch » https://www.youtube.com/watch?v=Pby1r2llf4k]

Sheldon Garry Adelson was born in 1933, in the Dorchester neighborhood of Boston. His father was a taxi driver, his mother the manager of a knitting store. A natural entrepreneur, he was selling newspapers by age 12 and running a vending machine business at 16. After dropping out of City College of New York and serving in the Army, he attempted to start dozens of small businesses.

Adelson began amassing his fortune with a technology trade show. He later sold his stake in the computer convention COMDEX in 1995 for more than $800 million.

When he bought the Sands Hotel in 1989, he was thinking convention space, not just gambling, would make money. It did. He built a convention hall to keep his hotel rooms full on weekdays and others soon followed the business model. Meanwhile, he worked to replicate the Strip in Macao, the only place in China where casino gambling is legal, and his wealth grew exponentially.

Adelson decided to keep his casino employees in Las Vegas paid and insured despite closures and business slowing for casinos.

"That commitment helped keep thousands of Nevadans afloat during the most difficult of months, and Sheldon's commitment will never be forgotten," said Democratic Gov. Steve Sisolak. 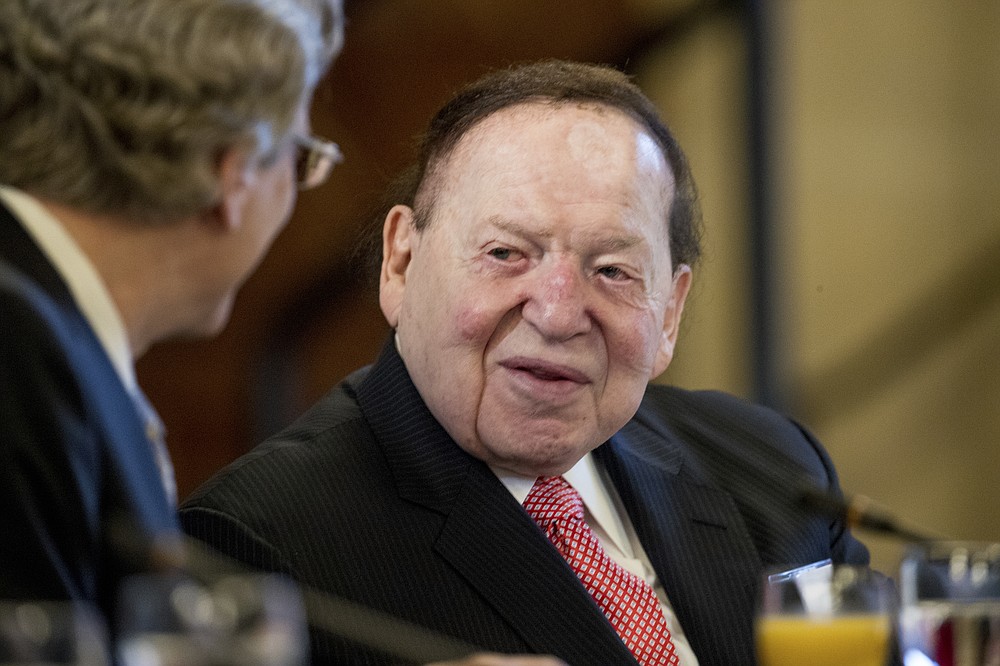 FILE - This Feb. 10, 2017 file photo, Chief Executive of Las Vegas Sands Corporation Sheldon Adelson shows at a business roundtable with Japanese Prime Minister Shinzo Abe at the U.S. Chamber of Commerce in Washington. Adelson, the billionaire mogul and power broker who built a casino empire spanning from Las Vegas to China and became a singular force in domestic and international politics has died after a long illness, his wife said Tuesday, Jan. 12, 2021. (AP Photo/Andrew Harnik, File) 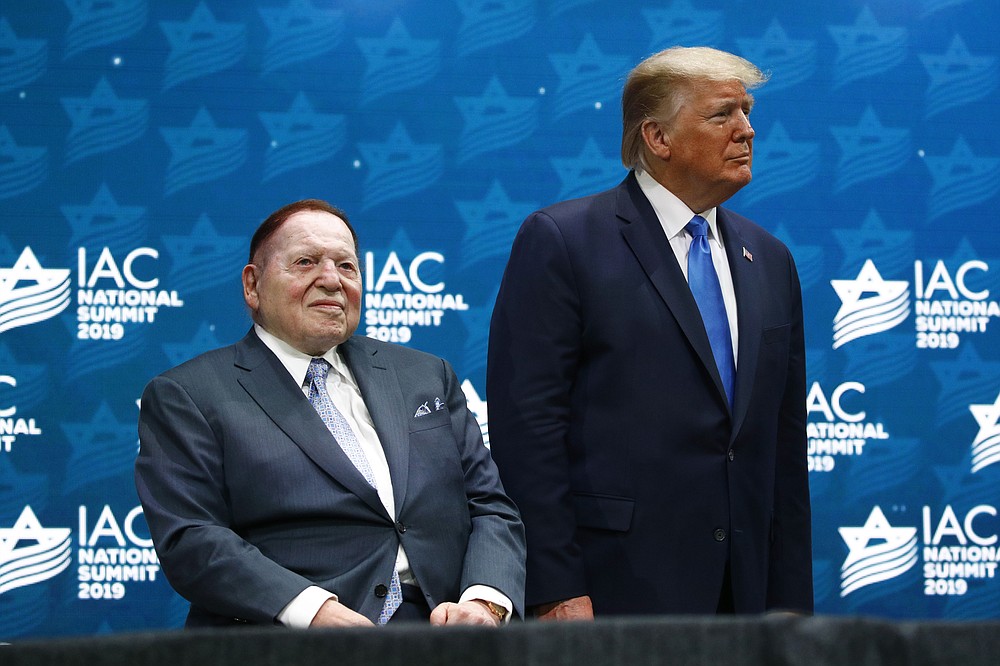 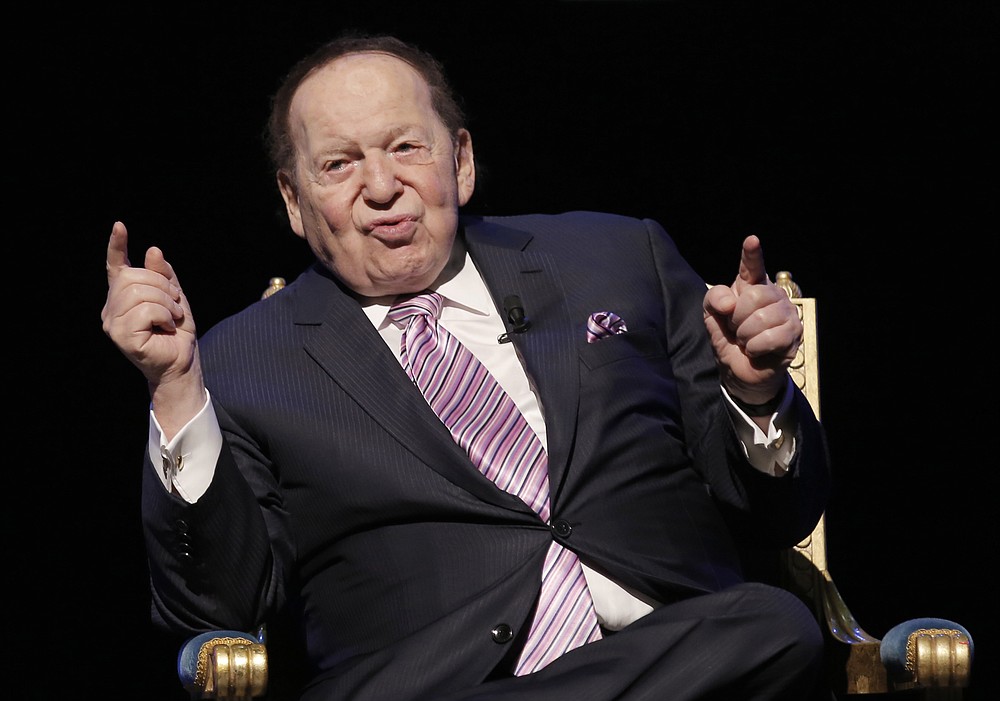 FILE - In this Sept. 13, 2016 file photo, U.S. billionaire Sheldon Adelson speaks during a news conference for the opening of Parisian Macao in Macau. Adelson, the billionaire mogul and power broker who built a casino empire spanning from Las Vegas to China and became a singular force in domestic and international politics has died after a long illness. (AP Photo/Kin Cheung, File)
ADVERTISEMENT