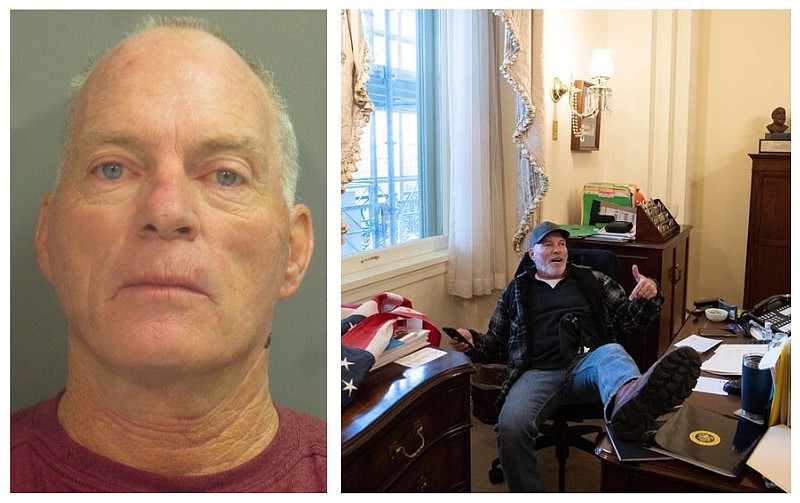 FAYETTEVILLE -- The Arkansas man who entered the U.S. Capitol on Jan. 6 and propped his feet on a desk in House Speaker Nancy Pelosi's office was armed with a "stun gun," according to an amended complaint in the case.

Richard M. Barnett, 60, of Gravette now faces a maximum of 10 years in prison if convicted on that charge, Chief Magistrate Judge Erin L. Wiedemann said during a federal court hearing Tuesday in Fayetteville.

Last week, before they knew about the weapon, Justice Department officials said Barnett faced a maximum sentence, if convicted, of one year in prison for illegally entering the Capitol.

A photograph of Burnett with his feet on a desk in Pelosi's office went viral. After he left the Capitol grounds, Barnett showed reporters an envelope he took from the office. Barnett said he left a quarter for the envelope, along with a nasty note for Pelosi.

Tuesday's 12-minute hearing was conducted via Zoom, with Barnett in the Washington County jail and others participating remotely.

Barnett wore prison stripes and a black bandanna pulled from his face down to his neck.

[Video not showing up above? Click here to watch » https://www.youtube.com/watch?v=luH908wNMG0]

When the judge asked if he could hear her, Barnett said, "Yes ma'am, I can." In response to most questions during the short hearing, Barnett addressed Wiedemann as "your honor."

"You are charged with knowingly entering or remaining in a restricted building or restricted grounds without lawful authority while carrying a dangerous weapon, specifically a stun gun," said Wiedemann, while going over the charges with Barnett. "That is the additional fact that is stated in the amended complaint.

When asked if he understood the charges against him, Barnett said, "I do, your honor."

According to the amended complaint from Special Agent James Soltes of the Capitol Police Department, he learned Monday that police had received a tip that in one or more of the photographs of Barnett seated in Pelosi's office he was carrying a stun gun. Soltes determined the tip to be accurate.

"Based on the brand on the weapon, and its appearance, the weapon appeared to be a ZAP Hike 'N Strike 950,000 Volt Stun Gun Walking Stick," according to the amended complaint.

The collapsible Hike 'N Strike can be expanded from 29 inches to 56 inches in length, according to retail websites that sell the product.

The packaging for such a weapon was found Friday when the FBI searched Barnett's home near Gravette, Soltes wrote. The mayor of Gravette, Kurt Maddox, has been quick to note that Barnett lives outside the city limits.

At a news conference Tuesday afternoon in Washington, D.C., acting U.S. Attorney Michael Sherwin said people were initially charged so police could quickly arrest them, but as investigations continue, those complaints are often amended to include more serious charges.

"When criminal conduct occurs, we try to obviously charge people as soon as possible," Sherwin said. "So the prosecutors from the D.C. U.S. attorney's office, we look for the most simple charge we could file as quick as possible."

Initial charges in some cases were for only misdemeanor crimes, he said.

"However, I want to clarify a misconception: this is only the beginning," Sherwin said. "So after these criminal charges are filed via criminal complaints, that allows us, that allows law enforcement from across the United States to arrest people -- from Dallas to Arkansas to Nashville to Cleveland to Jacksonville. That's what's happened over the last few days. It's really quite incredible. After those charges are filed, we then have the ability to indict these individuals on more significant charges. And that is exactly what has happened."

Sherwin said there could be hundreds of criminal cases stemming from the attack at the Capitol. He said 70 people have already been charged.

Sherwin said cases "related to the most heinous acts that occurred at the Capitol" may result in felony charges tied to sedition and conspiracy.

He said the Justice Department was making a priority of cases in which weapons or "destructive devices" were involved.

They're also focusing on cases in which people attacked police officers or the media.

Participating in the same news conference, Steven D'Antuono, the assistant director in charge of the FBI's Washington field office, said efforts were being made to track down everyone who participated in the rioting.

"In six days we have opened over 160 case files, and that's just the tip of the iceberg," he said.

D'Antuono said agents from the FBI's 56 field offices were helping track down people who had participated in the melee at the Capitol on Jan. 6.

"Even if you left D.C., agents from our field offices will be knocking at your door," he said.

D'Antuono said the FBI has received more than 100,000 pieces of digital media and is seeking more from people who were at the Capitol that day.

Meanwhile, a hearing has been scheduled for Friday so Wiedemann can listen to arguments about whether Barnett should remain in jail or be released on bond.

"I will advise you, Mr. Barnett, that you have the right to request transfer from the District of Columbia to this district for the purposes of entering a guilty plea," said the judge.

Last week, the Justice Department said Barnett would ultimately be extradited to the District of Columbia. 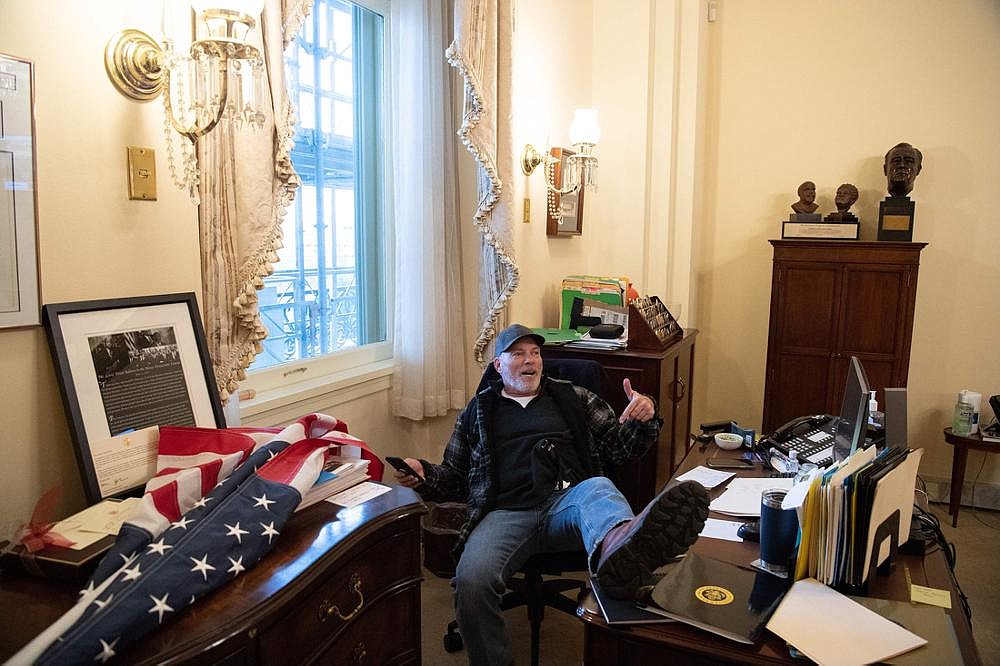 Richard “Bigo” Barnett, 60, who had his picture taken Wednesday while sitting in House Speaker Nancy Pelosi’s office after he and other protesters stormed the U.S. Capitol, is a resident of Benton County, the mayor of Gravette and a county justice of the peace confirmed. (Special to the Arkansas Democrat Gazette/AFP via Getty Images/Saul Loeb)
ADVERTISEMENT