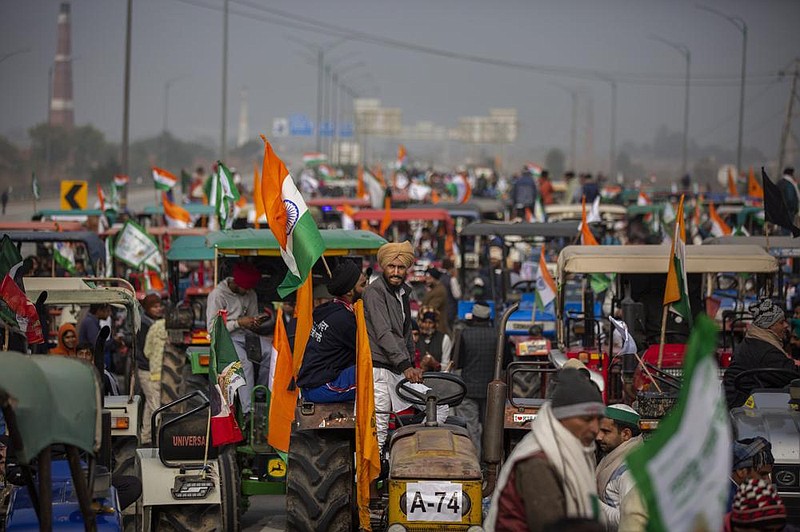 NEW DELHI -- The decision by India's highest court Tuesday to temporarily suspend the implementation of new farming laws at the center of huge protests appeared unlikely to end the weeks-long showdown choking New Delhi, as protesting farmers declared the suspension a politically motivated "trick" to ease the pressure on the government of Prime Minister Narendra Modi.

The Supreme Court said it was halting the market-friendly laws until a committee of experts, appointed by the court, could consult with government officials and protesting farmers to try to find a solution to the dispute.

But protest leaders, who have been pressing for nothing short of repealing the new laws that they say diminish the little state protection they have and leave them at the mercy of corporations, said the names of the four members of the committee further confirmed their skepticism. All four tasked with providing expert opinion to the court on the future of the laws had made public statements in support of the laws, they said.

"This is the government tactic to reduce pressure on" itself, said Balbir Singh Rajewal, a leader of one of the farmer unions. "All the committee members are pro government. All are people who so far justified the government laws -- they are writing articles to justify the government law. We have decided that our agitation will continue."

Tens of thousands of farmers have besieged New Delhi for more than six weeks, setting up well-organized protest camps stretching for miles at all of the capital's main entrances. They have stood firm despite the winter cold, frequent rain and dozens of deaths in their ranks.

The farmers said they will not only continue their sit-ins around New Delhi but also will go ahead with a large tractor rally inside the capital later this month. The government has tried to prevent the rally from happening with claims that the protesters are "infiltrated" by separatist militants. The Supreme Court justices Tuesday asked the attorney general, who appeared on behalf of Modi's government, to submit evidence substantiating those claims.

"Our program on January 26 will be completely peaceful," Rajewal, the farmer leader, said regarding the planned tractor rally. "We were peaceful, we have been peaceful, and we will remain peaceful."

The government of Modi, who has said he wants to nearly double India's economy by 2024, hopes that injecting private investment into the troubled farming sector will expedite growth. The new laws, which Parliament passed in September in a hurried manner that led to protests from opposition parties, would ease some government regulations in order to encourage private investors to deal directly with farmers.

Even with the government's regulatory support over the past decades, such as minimum guaranteed prices for certain crops, the farmers had been struggling with rising debt, which has driven many of them to suicide. They fear that the new laws will remove the scant protection they have enjoyed and that they will struggle to fight corporate giants for fair treatment.

The court's intervention came after several rounds of negotiations between farmer leaders and members of Modi's Cabinet failed to break the impasse. During the two-day court hearing, the three-judge bench was at times scathing in its criticism of the government's handling of the farming laws and the protests. On the eve of the ruling, the chief justice, Sharad Arvind Bobde, said that he was "extremely disappointed" and that he feared the protests could lead to violence.

"We don't want anybody's injury or blood on our hands," Bobde said during the hearing.

But analysts said the court's new committee only furthered existing concerns about the impartiality of the judicial system.