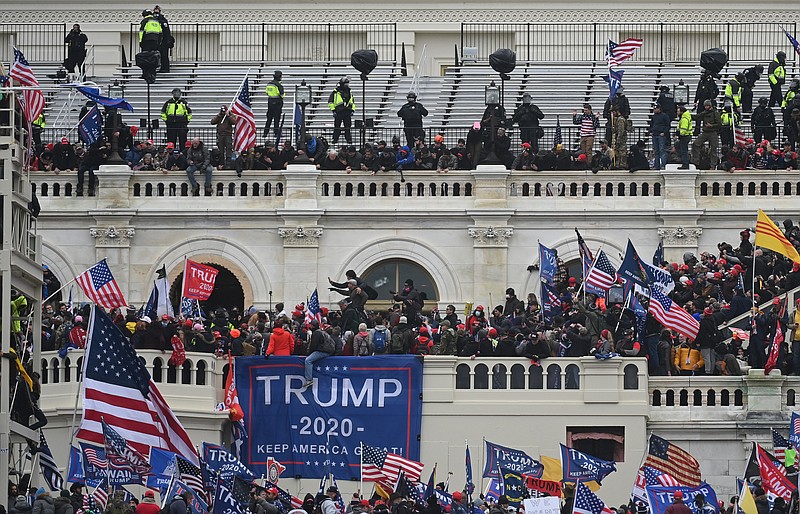 A mob riots at the Capitol on Wednesday, Jan. 6, 2021. MUST CREDIT: Washington Post photo by Matt McClain

WASHINGTON -- A day before rioters stormed Congress, an FBI office in Virginia issued an explicit internal warning that extremists were preparing to travel to Washington to commit violence and "war," according to an internal document reviewed by The Washington Post that contradicts a senior official's declaration that the FBI had no intelligence indicating anyone at last week's pro-Trump protest planned to do harm.

A situational information report approved for release the day before the U.S. Capitol riot painted a dire portrait of dangerous plans, including individuals posting a map of the complex's tunnels, and possible rally points for would-be conspirators to meet in Kentucky, Pennsylvania, Massachusetts and South Carolina and head in groups to Washington.

[Video not showing up above? Click here to watch » https://www.youtube.com/watch?v=uTSCAJvmPvg]

"As of 5 January 2021, FBI Norfolk received information indicating calls for violence in response to 'unlawful lockdowns' to begin on 6 January 2021 in Washington. D.C.," the document says. "An online thread discussed specific calls for violence to include stating 'Be ready to fight. Congress needs to hear glass breaking, doors being kicked in, and blood from their BLM and Pantifa slave soldiers being spilled. Get violent. Stop calling this a march, or rally, or a protest. Go there ready for war. We get our President or we die. NOTHING else will achieve this goal."

BLM is a reference to the Black Lives Matter movement for racial justice. Pantifa is a derogatory term for antifa, a far-left anti-fascist movement whose adherents sometimes engage in violent clashes with right-wing extremists.

Yet even with that information in hand, the report's unidentified author expressed concern that the FBI might be encroaching on free-speech rights.

The warning is the starkest evidence yet of the sizable intelligence failure that preceded the mayhem, which claimed the lives of five people, although one law enforcement official, speaking on the condition of anonymity to avoid disciplinary action, said the failure was not one of intelligence but of acting on the intelligence.

At the FBI office in Norfolk, the report was written within 45 minutes of receiving the information, officials said, and provided to counterparts in Washington.

The head of the FBI's Washington field office, Steven D'Antuono, told reporters Friday that the agency did not have intelligence suggesting the pro-Trump rally would be anything more than a lawful protest.

During a news conference Tuesday, he said the Jan. 5 intelligence document was shared "with all our law enforcement partners" through the joint terrorism task force, which includes the Capitol Police, the U.S. Park Police, Washington's D.C. police, and a variety of other federal and local agencies.

He suggested that there was not a great deal for law enforcement to do with the information because the FBI at that time did not know the identity of the people who made the comments. "That was a thread on a message board that was not attributable to an individual person," D'Antuono said Tuesday.

D'Antuono did not say what, if anything, the FBI or other agencies did differently as a result of that information, nor did he explain why he told reporters Friday that there had been no such intelligence.

Recently departed Capitol Police Chief Steven Sund said in an interview Tuesday that he never received, nor was he made aware of, the FBI's field bulletin, insisting that he and others would have taken the warning seriously had it been shared.

After the riot, agents and prosecutors feel a great sense of urgency to track down and arrest the most violent participants in the mob.

The Justice Department and the FBI have created a sedition and conspiracy task force to pursue charges against participants in the storming of the U.S. Capitol and are investigating potential links to domestic or foreign instigators, officials said Tuesday.

Misdemeanor counts, including trespassing, against some of the dozens arrested so far may still be upgraded to sedition charges that are punishable by up to 20 years in prison, said acting U.S. Attorney Michael Sherwin in Washington.

Sedition charges would effectively accuse rioters of attempting to overthrow or defeat the government, with House Democrats saying after an FBI briefing on the siege that the rioters had engaged in an "attempted coup."

"This is only the beginning," Sherwin said of the initial round of charges against more than 70 people. "We're going to focus on the most significant charges as a deterrent because, regardless of if it was just a trespass in the Capitol or if someone planted a pipe bomb, you will be charged and you will be found."

Even for those who have left Washington, "agents from our local field offices will be knocking on your door,"D'Antuono said.

Senate Minority Leader Charles Schumer, a New York Democrat, called for the rioters to be added to a no-fly list, a tool most commonly applied in foreign terror cases.

There is already significant online discussion of new potential clashes Sunday and again on Jan. 20 when Biden will be inaugurated.

Sherwin said there would be a strike force of prosecutors looking to file charges of seditious conspiracy where the evidence merited it.

The Jan. 5 FBI report notes that the information represents the view of the FBI's Norfolk office, is not to be provided to outside law enforcement circles and is not "finally evaluated intelligence." It also said that agencies that receive it "are requested not to take action based on this raw reporting without prior coordination with the FBI."

A number of law enforcement officials have said privately in recent days that the level of violence exhibited at the Capitol last week has led to difficult discussions within the FBI and other agencies about race, terrorism, and whether investigators failed to register the degree of danger because the overwhelming majority of the participants at the rally were white conservatives loyal to President Donald Trump.

"Individuals/Organizations named in this [situational information report] have been identified as participating in activities that are protected by the First Amendment to the U.S. Constitution," the document says. "Their inclusion here is not intended to associate the protected activity with criminality or a threat to national security, or to infer that such protected activity itself violates federal law.

The document notes that one online comment advised, "if Antifa or BLM get violent, leave them dead in the street."

On Jan. 6, a large crowd of people who had attended a nearby rally marched to the Capitol, smashing windows and breaking down doors to get inside. One woman in the mob was shot and killed by a Capitol Police officer. Officials said three others in the crowd died from medical emergencies. A Capitol Police officer died after suffering injuries.

The FBI said in a statement that its "standard practice is to not comment on specific intelligence products," but added that FBI field offices "routinely share information with their local law enforcement partners to assist in protecting the communities they serve."

For weeks leading up to the event, FBI officials discounted any suggestion that the protest of pro-Trump supporters upset about the scheduled certification of Joe Biden's election could be a security threat on a scale with racial justice protests last summer in the wake of George Floyd's death in Minneapolis police custody.

While the nation's capital is one of the most heavily guarded cities on the planet, local and federal law enforcement agencies sought to take a low-key approach to last week's event, publicly and privately expressing concerns that they did not want to repeat the ugly clashes between protesters and police last year.

Some law enforcement officials took the view that pro-Trump protesters are generally known for over-the-top rhetoric but not much violence, and therefore the event did not pose a particularly grave risk, according to people familiar with the security discussions leading up to Jan. 6.

Even so, there were warning signs, though none as stark as the one from the FBI's Norfolk office.

FBI agents had in the weeks before the Trump rally visited suspected far-right extremists hoping to glean whether they had violent intentions, a person familiar with the matter said, though it was not immediately clear who was visited or if the FBI was specifically tracking anyone who would later be charged criminally. These visits were first reported Sunday by NBC News.

In addition, in the days leading up to the demonstration, some Capitol Hill staff members were told by supervisors to not go into work that day, if possible, because it seemed the danger level would be higher than in a lot of previous protests, according to a person familiar with the warning. Capitol Police did not take the kind of extra precautions, such as frozen zones and hardened barriers, that are typically used in major events around the Capitol.

Federal agents are in a state of high alert in the days leading up to the inauguration as authorities brace for possible violence not just in Washington, but around the country, officials said.

The FBI recently issued a different memo saying that "armed protests" were being planned "at all 50 state capitols" and in D.C. in the days leading up to the inauguration, according to an official familiar with the matter, speaking on the condition of anonymity to discuss a sensitive law enforcement matter.

The memo -- first reported on by ABC News -- is a raw intelligence product, compiling information gathered by the bureau and several other government agencies, an official said. Some of it is unverified, and the threat is likely to differ significantly from place to place, the official said.

But the data it highlights to law enforcement officials is nonetheless troubling -- including that there was information suggesting that people might storm government offices, or stage an uprising were Trump to be removed from office, the official said.

In a statement, the FBI declined to comment specifically on the memo about state capitols but said: "Our efforts are focused on identifying, investigating, and disrupting individuals that are inciting violence and engaging in criminal activity. As we do in the normal course of business, we are gathering information to identify any potential threats and are sharing that information with our partners.

"The FBI respects the rights of individuals to peacefully exercise their First Amendment rights," it continues. "Our focus is not on peaceful protesters, but on those threatening their safety and the safety of other citizens with violence and destruction of property."