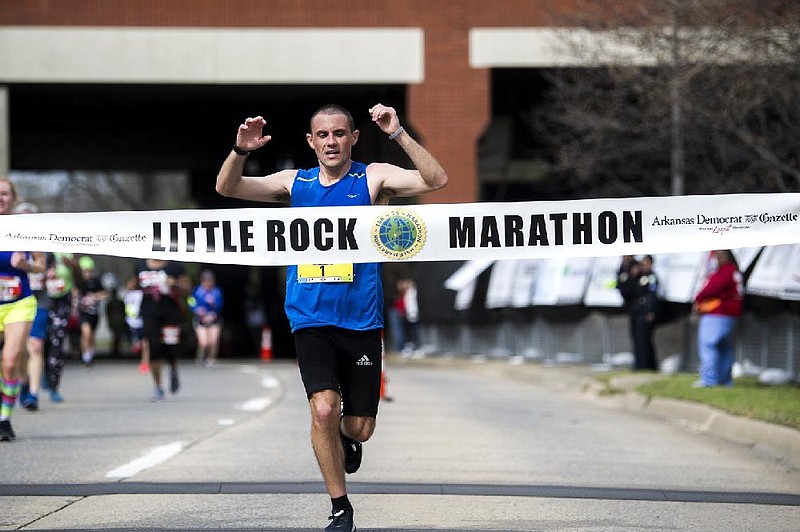 The 2021 Little Rock Marathon, originally scheduled for March, has been postponed to November amid the recent surge of coronavirus cases in Arkansas and across the nation, according to a statement from race organizers.

"Race organizers and the City of Little Rock made the decision to move race weekend activities, citing the challenges of staging an event of this scale at this time and out of concern for the safety of event participants, volunteers, event staff and spectators," organizers said in the statement.

Race organizers cited the availability of the Statehouse Convention Center in Little Rock and city resources as the rationale for selecting the dates for the November weekend.

Little Rock Parks and Recreation Department Director John Eckart said in a telephone interview Tuesday that the decision to postpone the marathon was based on "current covid conditions."

"Obviously, we didn't feel that it'd be prudent to move forward at this time, so we decided to move it to November so they can hopefully have an [uninhibited] race and have more people," he said. "As it was, we were going to have it scaled down quite a bit this March."

Eckart said the decision to delay was made late last week.

Plans to hold the marathon in March were apparently still in place as recently as last month. In a December article, Little Rock Marathon co-executive directors Geneva Lamm and Gina Marchese told AY Magazine's Dwain Hebda that races were still scheduled for March.

"As of yet, we are on," Marchese told the magazine. "Especially with the vaccines coming into play as early as next March, it's plausible that we will be running."

Activities for last year's Little Rock Marathon took place on the weekend of Feb. 29-March 1, just weeks before the shock to daily life from the widening coronavirus outbreak began to reverberate across the United States.

Gretchen Hall, president and chief executive officer of the Little Rock Convention and Visitors Bureau, said officials are optimistic that the economic boost from the marathon will be the same or greater in light of the event's delay this year.

"We're hopeful that there won't be much of an impact and that the same number or similar number of athletes can participate in the November date, or maybe even potentially more athletes participate that might not have been comfortable traveling in March, but that might be comfortable now traveling in November," Hall said in a telephone interview Tuesday.

According to an economic projection sheet provided by Hall, local and out-of-town attendance for the March 2021 marathon were estimated at 8,250 and 2,000, respectively.

Total direct business sales associated with the 2021 marathon -- including categories like lodging, food, transportation and retail -- were projected to be nearly $1,520,000. In an email, Hall explained that the projections were based on previous attendance levels, and can be monitored and adjusted based on registrations for the postponed marathon.

Hall suggested that the economic effects of the marathon could be felt across the river, too, in North Little Rock's downtown, potentially at the Wyndham Riverfront hotel property, which is close to the marathon's starting line.