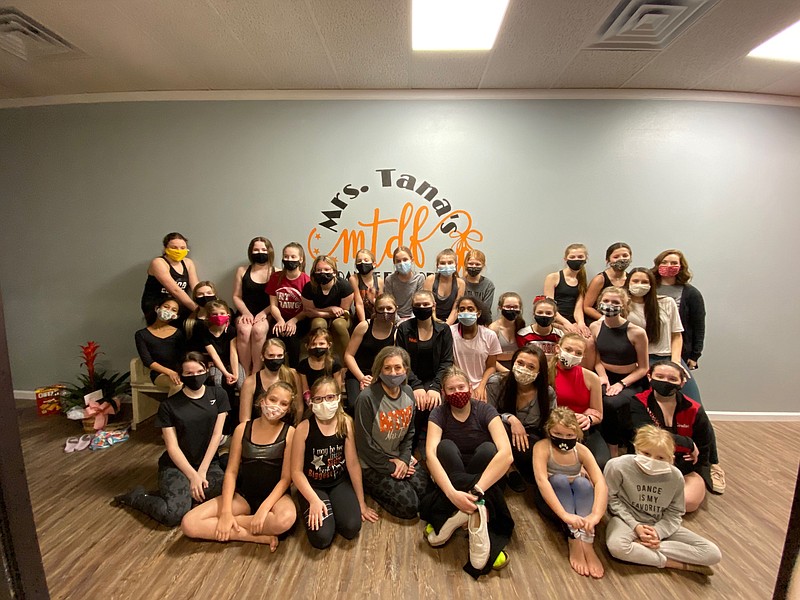 Tana Cook, third from left on front row, is surrounded by some of her students in her studio, Mrs. Tana's Dance Factory, 8404 Dollarway Road. She opened the new location Jan. 4. (Special to The Commercial)

Most people don't want to end a career where it started, but that's not the case with Tana Cook. Now she's right back where she began.

After a few years training under mother and 53-year dance instructor, Dorothy Soto, and working in Warren, Dumas and Fordyce in the late 1980s, Cook was ready to head out on her own in White Hall.

In reality, she took over another studio, along with a couple dozen students and renamed it Mrs. Tana's Dance Factory. The Dollarway location was her first, but she would move twice more before returning to her original studio.

However, there's one major difference this time -- she owns the entire 8,000-square-foot building and has divided it into four studios with a different teacher in each.

"I always wanted to own my own studio. I'm happy to be back where I started...I'm nervous but it's an exciting moment in my career," Cook said.

She said she needed more space because her student population has grown from about 30 to more than 170.

The space will allow her to expand her more traditional offerings of tap, jazz, ballet, contemporary hip hop to cardio exercise and possibly self defense classes, she said.

Her classes aren't just for girls either but include boys and adults, she said.

More importantly than first place trophies, Cook said, "I prefer the good sportsmanship-type awards. I tell my students that we're a no-drama studio. We have got to be caring and act lovingly with each other and toward other studios."

While the dance requires discipline and fitness, and is centered around competition, Cook said, "I encourage my students to work together and help each other."

They also give back to the community. Last fall, they donated their time and talents to the two-night Arts and Science Center for Southeast Arkansas' "Heart for the Arts: ASC Telethon 2020."

"I have some very talented dancers. I'm so proud of all my students," Cook said.

THE FAMILY THAT DANCES TOGETHER

Her brother, Matt Soto, was the emcee for the ASC's event. Cook's son, Liam Cook, and a niece, Isabella Soto, were part of the dance troupe performing.

Dorothy Soto, who started her career 50 years ago in Star City, Dumas and Pine Bluff, continues to work but now alongside her daughter.

Cook's new space is exactly as she imagined, thanks to her husband, Dan Cook, and his good friend, Scott Curry, who put in countless hours rehabbing the studios.

"They were very generous with their time and went above and beyond," Cook said.

Her students, past and present, are also like family to Cook, and many remain in contact with her as adults. Some have children who take classes from Cook.

"I can't imagine doing anything else but showcasing my students' talent," she said. "Helping shape them and passing my knowledge and skill to them, especially in my own studio."