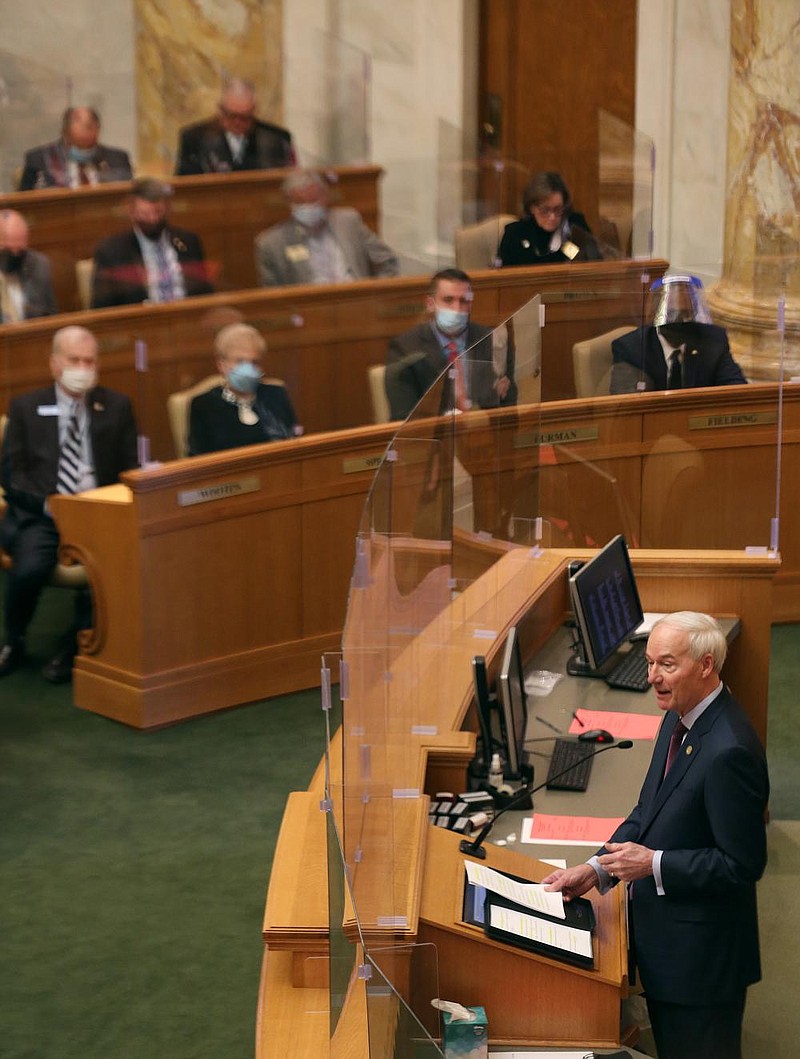 Among his several goals for the 2021 session of the Arkansas General Assembly, Gov. Asa Hutchinson told lawmakers Tuesday they should ensure police officers operate on the highest standards, are fully trained, funded and supported.

That earned a standing ovation from the lawmakers in the House chambers.

He followed up by also saying police need increased accountability and oversight.

That got what might be called a smattering of applause. It deserved more.

Last year's examples of police brutality -- who can forget the excruciating scene of George Floyd's death under the knee of a Minneapolis officer? -- ought to automatically make an examination of how policing is done a priority. And, despite what some believe, such an examination does not have to include maligning the men and women of law enforcement.

If that were the goal, a fresh look at what we call "policing" in the United States would be as much a failure as ignoring the issue altogether.

Rational reform isn't about destroying police departments or making villains out of anyone who dons a law enforcement officer's uniform? Law enforcement agencies are vital to the safety of communities, but if nothing else became clear last year, it's that law enforcement cannot have all the problems within our communities laid in its lap as though that leads to a solution.

When someone is engaged in or threatening violence, we'll always want law enforcement officers to show up and do their best to de-escalate the situation, but above all to protect those who need it. But there's a whole world of situations out there that might be handled differently, and maybe better, if lawmakers and advocates for reform can seek out creative solutions that do more than just put people behind bars.

We were reminded of such efforts the other day when our news folks took a look at a two-month-old program in Fort Smith designed to get help to those who need it.

"It's not always about punishment," Grubbs told our reporter. It's about determining what an underlying cause is, and health professionals, us as professionals, have basically come to terms that a lot of petty thefts and drug usage -- a lot of minor, low-level, misdemeanor-type crimes -- are driven by either some type of addiction or some other type of issue."

The program attempts to discern what's best for people committing such crimes -- is it time in jail, only to be released right back into the difficult life they had before, or is it something potentially life-changing? If "the system" can help address substance abuse or mental health challenges, can it help get people on a different, more positive track?

Is that police reform? In a way, yes. But it also tacitly acknowledges it's not just police who have to change expectations. It's us. It's the people of every community. It's the city, county and state leaders who make decisions about which programs will and won't be funded. It's about our attitudes -- do we want to extract our pound of flesh (jail) or actually address the issues that, in many cases, motivate people to engage in criminal behaviors?

None of us should pretend such programs will end crime, but can they reduce it? Can they deter someone from graduating up the scale to bigger crimes? If so, isn't that a win for the community as much as it is for the individual involved?

Fort Smith's program is just one example of reforms within what we now consider law enforcement that could, in the long term, reduce the number of incidents demanding police responses.

It's important state lawmakers and local leaders understand that reform in how our communities handle some criminal behaviors isn't "going easy" on crime. Rather, it takes a new perspective on what can make a difference for everyone. It's not -- or at least shouldn't be -- about defunding law enforcement. It's about thinking through complexities and responding to them in ways that appreciate those complexities.

We support law enforcement -- the life-saving, rescuing, protecting, love-their-communities kind. The kind that attempts to treat everyone fairly. And the kind, as with Fort Smith's program, that devotes its professionalism to improving communities for everyone.

If that becomes the goal of reform in the Legislature, we might just end up better at the end of the session than where we are now.

When it comes to reforming law enforcement, it’s not about defunding, but improving each community’s response to the root causes of crimes.