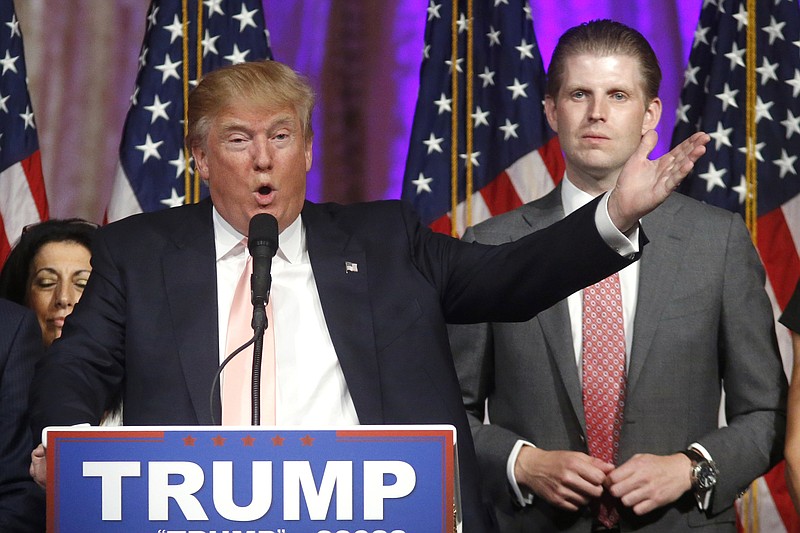 FILE - In this Tuesday, March 15, 2016, file photo, Republican presidential candidate Donald Trump speaks to supporters at his primary election night event at his Mar-a-Lago Club in Palm Beach, Fla. At right is his son Eric Trump. Hits to President Donald Trump’s business empire since the deadly riots at the U.S. Capitol are part of a liberal “cancel culture,” his son Eric told The Associated Press on Tuesday, Jan. 12, 2021, saying his father will leave the presidency with a powerful brand backed by millions of voters who will follow him “to the ends of the Earth.” (AP Photo/Gerald Herbert, File)

"I'm here to announce that the city of New York is severing all contracts with the Trump Organization," de Blasio said in an interview on MSNBC.

De Blasio said the Trump Organization earns about $17 million a year in profits from its contracts to run two ice skating rinks and a carousel in Central Park as well as a golf course in the Bronx.

The city can legally terminate a contract if the leadership of a company is engaged in criminal activity, the Democratic mayor said.

"The City of New York has no legal right to end our contracts and if they elect to proceed, they will owe The Trump Organization over $30 million dollars," the spokesperson said in an emailed statement. "This is nothing more than political discrimination, an attempt to infringe on the First Amendment and we plan to fight vigorously."

The move to end Trump's business contracts in the city he formerly called home is the latest example of how the Jan. 6 breach by violent Trump supporters is affecting the Republican president's business interests.

The PGA of America voted Sunday to take the PGA Championship away from his New Jersey golf course next year, a move that came after social media platforms disabled Trump's accounts and Shopify took down online stores affiliated with him.

De Blasio had said earlier that the city was examining its legal options to end the Trump contracts. He said Wednesday that city lawyers determined that if Trump sues over the move, the city would win. Trump "incited a mob to attack the Capitol," de Blasio said, adding, "the lawyers looked at it and it was just as clear as a bell that's grounds for severing these contracts and we're moving to do that right away."

Jim Johnson, the head of the city law department, said the PGA's move to cut ties with Trump gives the city additional grounds to terminate the golf course contract.

"One of the reasons that he was given that contract was his ability to attract major golf tournaments," Johnson said at a briefing with the mayor. After the PGA's action last weekend, Johnson said, "we're entitled to and are invoking our provisions, our right to declare him in default."

The split with Trump's namesake company won't happen immediately, though. De Blasio said in a news release that terminating contract to run the Ferry Point golf course in the Bronx is complex "and is expected to take a number of months."

The city will seek new vendors for all the attractions, the mayor said.

Removing the Trump name from the rinks, carousel and golf course won't erase him from New York City. He will still operate Trump Tower on Manhattan's Fifth Avenue and the Trump International Hotel on Central Park West. Trump moved his official residence from Trump Tower to Florida in 2019.