Miller, Rogers girls too much for Bentonville West 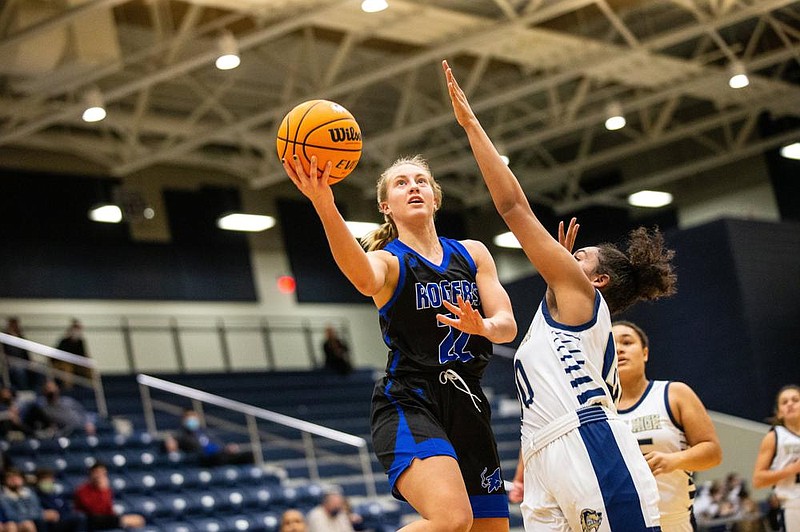 CENTERTON -- Rogers High's girls had one lead slip away Tuesday, but Kate Miller made sure it didn't happen a second time.

The junior forward scored 12 of her 21 points in the second quarter and helped the Lady Mounties take the lead for good en route to a 51-37 victory over Bentonville West during 6A-West Conference basketball action in Wolverine Arena.

"Our theme for the past three days has been overcoming adversity," Rogers coach Preston Early said. "We've been saying to find a way, but we've been doing it. We had people in and out of practice because of contact tracing, and we had Kate go down.

"We've had several things where things were out of sorts, but what you do is you find a way. Our players plugged away in new positions and we had a freshman come in and play a lot of minutes. I was proud of the team effort, and we found a way to grind one."

Rogers (10-4, 2-1 6A-West) jumped out to a 7-0 lead, thanks to five straight points and Aubrey Treadwell, but that lead temporarily vanished when West (4-8, 1-2) tied the game at 10-10 on Savannah Rangel's two free throws with 1 minute, 15 seconds left in the first quarter. The Lady Mounties, however, went back in front on Gracie Carr's putback with 4 seconds left.

Miller then went to work in the second quarter as she drilled a trio of 3-pointers and fueled a 17-6 run as Rogers built a 29-16 halftime lead. The Lady Mounties helped their cause by not allowing a West bucket until Mona Keita scored with five seconds before halftime.

"We played a pretty good first half," Early said. "We were rough offensively, but I thought we were outstanding defensively and created opportunities for ourselves. Kate played big there, and she separated for us a little bit."

Treadwell added 14 points for Rogers, which will host Springdale in 6A-West action Friday. Rangel had 11 points to lead West, which travels to Springdale Har-Ber for conference action Friday.

Tucker Anderson hit five of West's 12 3-pointers and scored 19 of his 21 points in the first half as the Wolverines picked up their first conference win of the season.

Riley Bucchino finished with 16 for West (8-7, 1-2), which outscored Rogers 26-13 in the third quarter and turned a 37-29 halftime cushion into a 63-42 cushion. Three other Wolverines -- Dawsen Price, Cade Packnett and Nick Lorennij -- each had nine points.