Sites set to begin next tier of shots 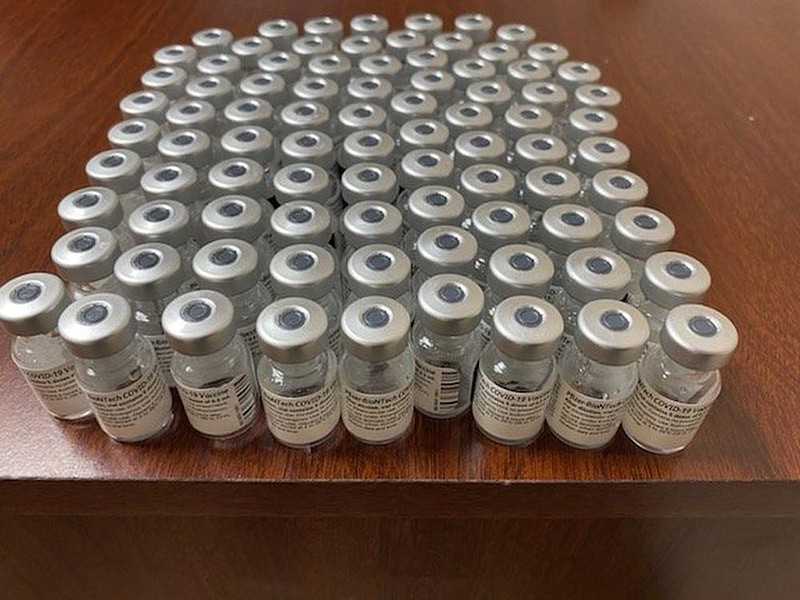 Doctor's Orders Pharmacy is ready to give covid-19 vaccination shots to some Phase 1-B individuals that Gov. Asa Hutchinson now says can start receiving vaccinations on Monday. These vials held the vaccine but have now been used by the pharmacy. (Submitted photo)

Jefferson County residents age 70 and older and those who work in child care, school districts and higher education will have access to coronavirus vaccinations starting Monday.

Lelan Stice — owner of Doctor’s Orders Pharmacy locations in Pine Bluff, White Hall and Star City — said vaccination clinics are scheduled with the four school districts in Jefferson County and higher education campuses. Those who work in education are asked to follow directives from their supervisors for the appropriate clinic.

Child care workers and those 70 and older can call the pharmacy at (870) 218-1718 or email dopcovidvaccine@gmail.com to schedule a vaccination.

The 70-older group, child care workers and education employees have been part of the Phase 1-B classification, but Gov. Asa Hutchinson moved that group up on the schedule, allowing them to get shots starting Monday.

Other categories of individuals in the Phase 1-B classification — food and agricultural workers, firefighters and police officers not in Phase 1-A, manufacturing workers, grocery store workers, public transit workers, U.S. Postal Service workers, essential government workers and other correctional staff members — will have to wait until a later date to get their shots.

Hutchinson acknowledged a debate brewing in Washington over whether people age 65-69, who were considered at high risk at the beginning of the covid-19 pandemic should also qualify for vaccinations sooner.

“We have to manage in a way to get the vaccine out as soon as possible, but prioritize those who need it the most,” Hutchinson said during his weekly covid-19 news conference.

Stice said Doctor’s Order’s Jefferson County locations have 1,800 doses on hand, enough to cover school employees, and he expects more doses to come in either this week or early next week.

Some of the doses are left over from shipments Doctor’s Orders received last week for health care workers and others classified in 1-A, Stice said. The Pine Bluff and White Hall locations are using Pfizer/BioNTech vaccines, which must be stored in extremely low temperatures. The Doctor’s Orders storage unit reaches to minus-78 degrees Celsius, he said.

A local hospital also transferred some of its doses to Doctor’s Orders, which Stice said is the only pharmacy in Jefferson County storing them as it is considered a “strike force pharmacy” under the vaccination plan.

Moderna vaccines, which can be stored at regular refrigerator and freezer temperatures, are available at the Star City location, he said.

About 600 doses were given Thursday and Friday at the Pine Bluff location, Stice said. He predicted about 600 per day will be given starting Monday.

“We vaccinated every first-line health care worker and first-responder that wanted the immunization,” Stice said. Those in Phase 1-A who weren’t vaccinated but would like to receive shots can call Doctor’s Orders.

Doctor’s Orders is looking for volunteers, such as nurses and emergency medical technicians, to help facilitate the shots, Stice said. A Facebook page for the vaccination clinic (@ dopcovidvaccine) will soon be established.

Each vaccination is covered by insurance or the federal government, Stice said. Doctor’s Orders bills the government for those who don’t have insurance, but those who are insured are asked to provide proof of insurance at the time of each shot.

Wendy Talbot, chief experience officer at Jefferson Regional hospital, said Tuesday that the hospital would be ready to start dispensing vaccine shots to the Phase 1-B classification of individuals as soon as it receives additional supplies of vaccine. For now, the hospital is expecting around 190 doses of the vaccine, which will be used to finish up the shots for individuals in the Phase 1-A classification.

Talbot said Monday and emphasized it Tuesday that individuals who belong in the Phase 1-B grouping can go now to the hospital’s website and put their names on a waiting list. The hospital will then call each person and set up appointments for them to go in to get their shots.

Print Headline: Sites set to begin next tier of shots