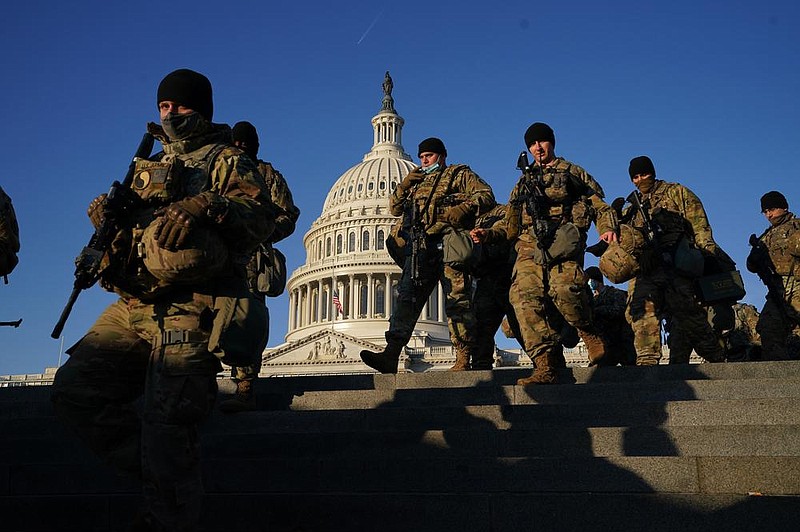 National Guard troops patrol the perimeter of the U.S. Capitol on Wednesday. As defense officials beef up the security presence ahead of next week’s inaugural, police chiefs in major cities are being warned to be on high alert. (The New York Times/Erin Schaff)

WASHINGTON -- An additional 5,000 members of the National Guard are available to support Inauguration Day security in Washington, city officials said Wednesday, which would increase the total to at least 20,000 in a rapidly swelling security apparatus focused on the Capitol.

"I think you can expect to see somewhere upwards beyond 20,000 members of the National Guard that will be here in the footprint of the District of Columbia," acting D.C. Police Chief Robert Contee said at a news conference.

A defense official, speaking on condition of anonymity to comment on internal discussions, said Pentagon officials were still working through plans for providing additional security support to the inauguration.

The official said discussions with city and federal officials over the final number of National Guardsmen to be sent into Washington were still at a notional stage, as officials plan for what is needed and take part in tabletop exercises led by the Secret Service.

For now, officials say 10,000 will be in place by the weekend. National Guard forces in and around the Capitol will be armed, while others are expected to be unarmed.

Defense Department officials are scrambling to establish an adequate plan for providing National Guard aid for the inauguration and avoid a repeat of last week's attempted insurrection at the U.S. Capitol.

Defense officials have already expressed concern about balancing the response in Washington with needs in individual states.

"We're not going to pull too much out of their states and put them at risk, so a very delicate risk management process is underway," Army Secretary Ryan McCarthy told The Washington Post on Tuesday.

Meanwhile, Airbnb said it will cancel and block all reservations in the Washington metropolitan area in coming days.

The mass cancellation came as the region's leaders announced that a number of Metro stations would be closed for a week to discourage visitors from going into downtown District of Columbia. Airbnb also discovered and banned accounts for many people involved in hate groups and last week's Capitol siege, the platform said in its announcement Wednesday.

Officials on Wednesday said they will close 13 Metrorail stations in the downtown District from Friday to Jan. 21, and 26 bus routes will be detoured around the restricted area. Some of the transport services also will operate on modified schedules.

District Mayor Muriel Bowser reiterated at a news conference her request for people to avoid the downtown area over the coming week. Beginning 6 a.m. Friday, all parking garages in the restricted zone will be blocked off, and any vehicles still there must remain until after the inauguration, Bowser said. Businesses receiving deliveries in that period will be notified of an off-site screening facility.

Separately, federal officials warned police chiefs in major cities during a call Wednesday to be on high alert and generous with intelligence as police departments around the country ramp up preparations for the week leading into the inauguration.

In a roughly 45-minute call, Christopher Wray, the FBI director, and Kenneth Cuccinelli, the acting director of the U.S. Citizenship and Immigration Services, expressed great concern about the potential for extremist violence, according to participants. Failing to identify any specific threats, the officials called on law enforcement officers across the country to watch for signs of trouble.

Wray said "we need to continue to overshare intelligence," Chief Jorge Colina of the Miami Police Department said in an interview. "So they don't want for us to assume anything that they already know -- anything that we come across to please forward it."

The officials said they would be issuing a national threat bulletin urging all Americans to be cautious in the coming days, according to a police chief who listened to the call but requested anonymity because they were asked not to share details of the call.

With the U.S. Capitol fortified by an intensive security operation, the officials seemed concerned about potential attacks on state capitols, federal buildings, the homes of congressional members and businesses, the chief said.

Federal officials said they were closely monitoring extremist chatter online and urged the chiefs to be mindful of potential lone-wolf actors and local armed groups, the chief said.

Information for this article was contributed by Missy Ryan, Alex Horton, Michael Brice-Saddler, Emily Davies, Marissa J. Lang, Justin George and Justin Jouvenal of The Washington Post; and by John Eligon of The New York Times. 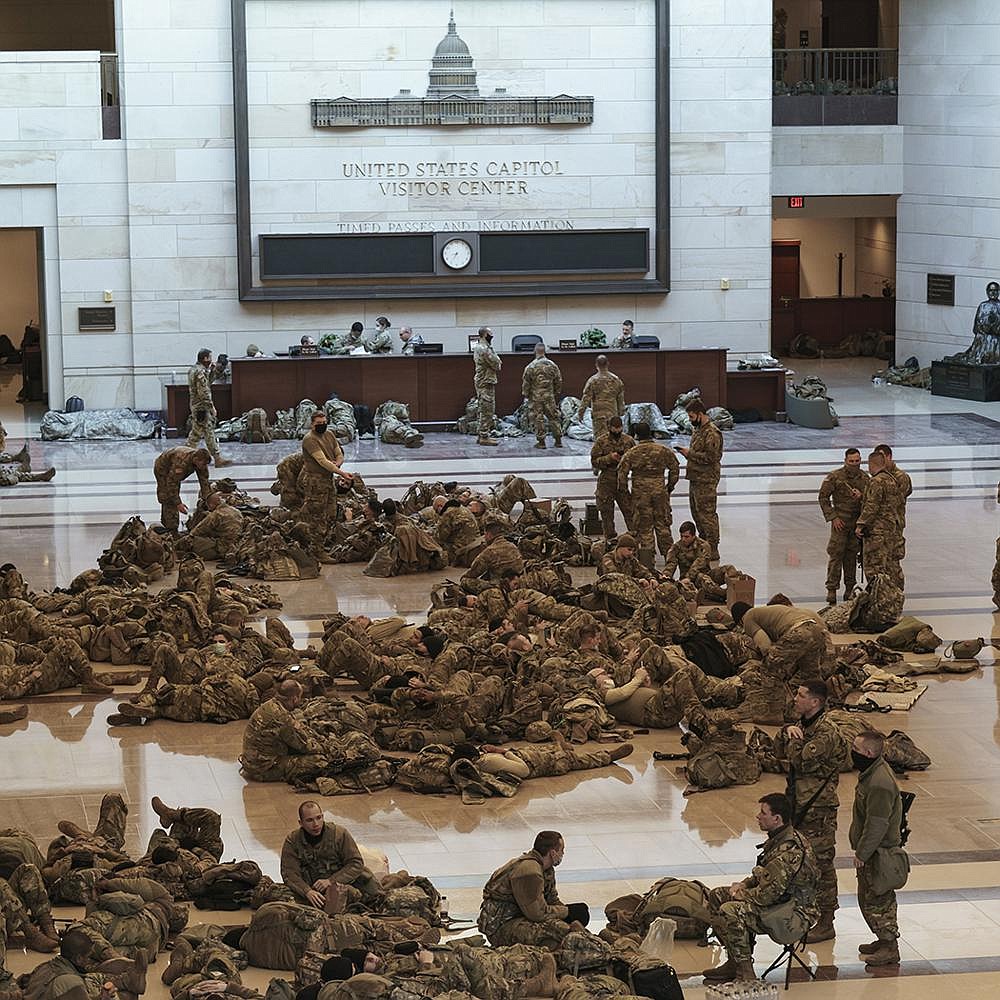 National Guard troops rest inside the U.S. Capitol on Wednesday while providing extra security for the House impeachment vote just a week after a mob stormed the building. Officials said more than 20,000 Guardsmen could be on duty for Inauguration Day security. (AP/J. Scott Applewhite)
ADVERTISEMENT