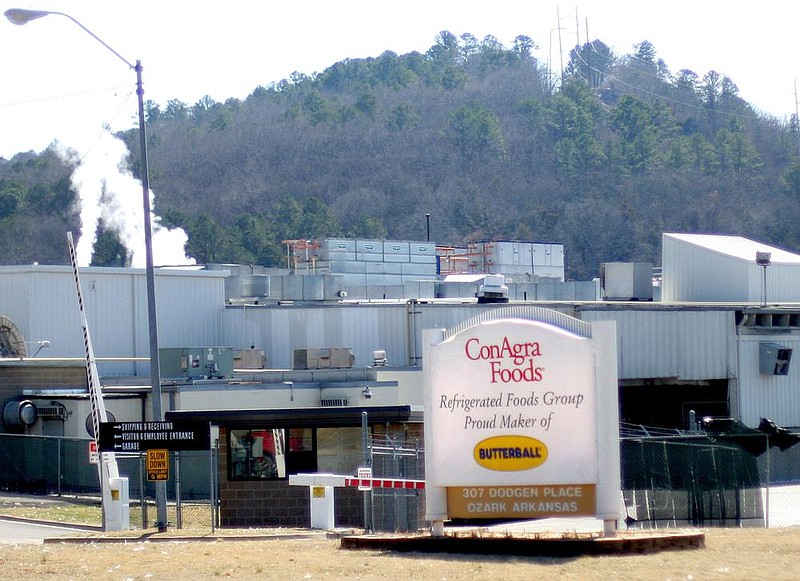 Butterball said Wednesday that it plans to spend $4.7 million on its facility in Ozark, seen in this file photo, and $4 million at its Huntsville location. (Arkansas Democrat-Gazette)

The company, a big seller of toms during the holidays, said Wednesday that the investment will create 360 jobs in the next three years.

"We are proud to continue to be vital contributors to and key supporters of the local communities in which we operate and we're grateful for the hardworking people of Arkansas," Jay Jandrain, Butterball's president and chief executive, said in a written statement.

The North Carolina company plans to spend $4.7 million on its facility in Ozark and $4 million at its Huntsville plant.

The investments are moving toward equipment upgrades and additional cooler space, as well as break-room remodeling and production line modifications.

Butterball said the investments will create 160 jobs in Ozark and 200 jobs in Huntsville.

According to the Arkansas Economic Development Commission, the manufacturing projects qualified for two state-funded investment and job creation incentives: a sales and use tax refund for expenses and a five-year cash rebate based on the company's annual payroll for new employees.

"This is a great day for Northwest Arkansas," Hutchinson said. "The trust that they have placed in our workforce and business climate is a great testament to the hard work and dedication of our state and these two communities."

In addition to these sites, Butterball has operations in Jonesboro, Yellville and the community of Alix, in Franklin County.

Ozark Mayor Roxie Hall said in a phone call that she was thankful for Butterball's continued investment in the area.

Butterball has been a vital part of the community and as businesses struggle to remain open, she said, "getting more jobs in this small town is going to be a huge asset."

Approximately 530 people work at the Ozark plant and 580 at the Huntsville site. Both plants are hiring for current and future positions.

Huntsville Mayor Darrell Trahan said in a phone call that the news comes at a time when many people are unsure of their economic situation.

The town recently did a study that shows more than 70% of employed residents travel outside Madison County for work.

"These additional jobs should alleviate some of that stress," Trahan said.

A Butterball spokesman said in an email Wednesday that average pay for the jobs created would be about $15 per hour.

Arkansas, one of the nation's top poultry producing states, reported processing 576 million pounds of turkey last year, valued at $333.5 million, according to U.S. Department of Agriculture estimates. That is a fraction of the billions of dollars generated each year from meat chickens.