Lottery revenue hits $283M in first half of fiscal '21

Bolstered by increased ticket sales during the coronavirus pandemic, the Arkansas Scholarship Lottery's revenue totaled $283 million in the first six months of the current fiscal year, exceeding the previous high for the first half of a fiscal year by $24 million.

So far in fiscal 2021, $46.7 million has been raised for college scholarships to beat the previous high for the first six months of a fiscal year by about $700,000.

The lottery reported these figures this week in its monthly report to Gov. Asa Hutchinson and the Bureau of Legislative Research. The lottery's financial fortunes have been strengthened for most of the pandemic that started in March in Arkansas.

The lottery started selling tickets on Sept. 28, 2009. It has helped finance Arkansas Academic Challenge Scholarships for more than 30,000 college students during each of the past 10 fiscal years.

Lottery Director Eric Hagler said "the entire team at the lottery understands that the pandemic environment has assisted our sales, and by extension net proceeds."

"However, the early effects of stimulus and wide-spread lockdowns are now less meaningful as we see folks returning to work and, to a great extent, adjusting to a restricted business environment," he said Wednesday in a written statement.

So far in fiscal 2021, scratch-off ticket revenue totaled $240.3 million, compared with $201.2 million in the same six-month period in the previous fiscal year.

For fiscal 2021, former lottery Director Bishop Woosley projected revenue at $465.8 million and the amount for scholarships at $78.2 million.

In May, Woosley noted, however, that "there is a great deal of uncertainty in the lottery world and the world in general right now."

Woosley attributed the drop in scholarship proceeds in fiscal 2020 to poor sales for Mega Millions and Powerball tickets, which are more profitable than scratch-offs.

Hagler, who started as lottery director on Aug. 6, said Wednesday that "from an optics perspective, we are thankful that the lottery is performing well above budget."

"We are also encouraged by what we can see on the horizon, although our optimism is guarded due to the continued uncertainty in the world," he said. "Gas prices are rising, which can weigh negatively on sales. Also, a new federal administration will be seated later this month, and it remains to be seen what policy will be enacted vis-a-vis economic closures."

President-elect Joe Biden will be sworn in on Jan. 20, replacing President Donald Trump, who lost to Biden in the Nov. 3 election. Biden is a Democrat; Trump is a Republican.

In December, revenue totaled $50.3 million, compared with $46.1 million in the same month a year ago, according to the lottery.

Hagler attributed the scratch-off increases to the introduction of three new games in December.

"We also believe that draw game sales saw an uplift due to the high jackpots, which we refer to as the halo effect," he said when asked about the impact of Mega Millions and Powerball jackpots on rising draw-game revenue last month.

Powerball's estimated jackpot reached $550 million, while Mega Millions was estimated at $750 million on Wednesday, according to their websites.

The lottery raised $5.9 million for scholarships last month, compared with the $6.3 million raised in December 2019.

"While the lottery earned more in December 2020, we are required to hold unclaimed prizes as earnings until fiscal year-end, which is June 30, 2021," Hagler said. "Thus, net proceeds will rise in June 2021 when the funds are transferred to net proceeds. Technically speaking, net proceeds were not down in December [year over year], but simply not yet accounted for in the net proceeds compilation."

At the end of each fiscal year, the lottery transfers the balance of the unclaimed prize reserve fund, minus $1 million, to college scholarships under state law.

Asked whether the lottery will propose any legislation in the regular legislative session that started Monday, Hagler said "the lottery does not plan to propose a legislative agenda during the 93rd General Assembly."

"We will respond to any legislation that touches on the business of the lottery, and we will offer insight as to how any proposed legislation will impact either Lottery operations or the ability to generate outsized net Proceeds," he said.

The Arkansas Division of Higher Education distributed $90.6 million in Arkansas Academic Challenge Scholarships to 31,649 students in fiscal 2020, according to the division. The scholarships also are financed with $20 million a year in state general revenue.

The division forecasts it will distribute $91 million in scholarships to 31,000 students in fiscal 2021.

The 2017 Legislature created the Workforce Challenge program to use excess lottery proceeds to provide up to $800 a year for students enrolled in programs that lead them to being qualified for high-demand occupations.

Last month, Lewis said the division has distributed $345,465 in Workforce Challenge Scholarships to 443 students so far in fiscal 2021.

The 2019 Legislature created the lottery-financed Concurrent Challenge program. High school juniors and seniors are eligible to receive the scholarships for a semester or an academic year in which they are enrolled in an endorsed concurrent course or certificate program under certain conditions.

Last month, Lewis said the division had distributed $683,302 in Concurrent Challenge Scholarships to 3,895 students so far in fiscal 2021. 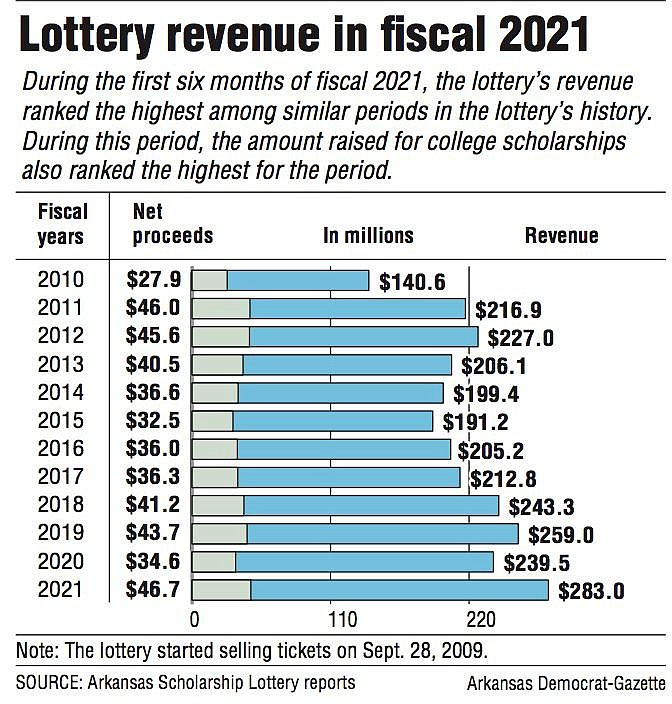