Mississippians sing the praises of company looking at PB lease 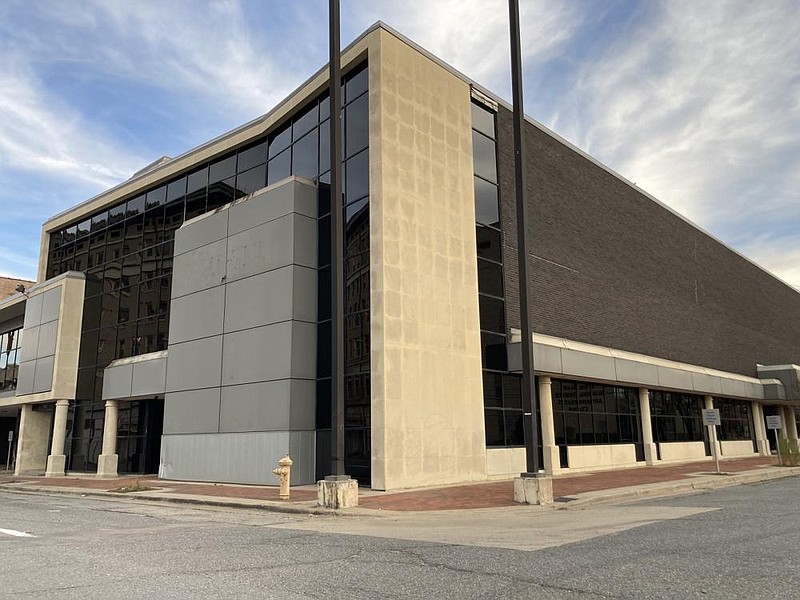 A company that trains people to take on high-tech jobs is planning to lease the old Bank of America building and open a location in Pine Bluff. (Pine Bluff Commercial/Byron Tate)

Kamilla Crump, a married mother of five, would wake up at 5 every morning for her daily 52-mile commute from Clarksdale, Miss., to work as a housekeeper at a casino just to have a lot of her hard-earned wages go to bus fare for that commute.

Sharlett Keaton, a college graduate and mother, worked at three casinos, 45 minutes away from her home in Clarksdale and wanted something closer. She later accepted a job at a Family Dollar store and then joined O'Reilly's Auto Parts as a parts specialist.

There was also a woman who was homeless, and some whose educational backgrounds were so limiting as to keep them out of the workforce.

These are all testimonials from Clarksdale residents from different situations and backgrounds who wanted something better for themselves and their families. They all wanted a change, and change is what they got when the PeopleShores Center opened in Clarksdale in early 2019, the same company seeking to make Pine Bluff its next home.

[Video not showing up above? Click here to watch » https://www.youtube.com/watch?v=AE53s2HTn0I]

A proposal was made during the Development and Planning Committee meeting on Tuesday that the company would like to lease the old Bank of America building and open a site to Pine Bluff, giving residents the opportunity to excel in technology-driven jobs. The company has not said what its timetable is, but the lease agreement is supposed to be ready for company officials to look at in February. At the committee meeting, which was held on Zoom, officials said the company would start with about 70 employees and that the total could go as high as 300.

Workers would receive paid training and once trained they are hired to do coding and other projects for a number of tech companies locally and around the world.

According to PeopleShores officials, they believe a person doesn't need a four-year degree to get a technology job, and they are looking for people who have the will to learn.

After a long tenure with O'Reilly's and later the Family GAP Foundation, Keaton stepped out on faith on Jan. 17, 2019.

"My life changed during this period because I became certified in Automation Anywhere in versions 10 and 11," she said. "PeopleShores flew me and my co-worker to Dallas where we both received our RPA Trainer's certification. I became team lead of the RPA team where I oversee bot development for businesses local and nationwide."

Crump said she went from a job she hated to a job she wakes up to every morning and is grateful to have.

"Now that I work for them, I am doing so much better financially and socially," said Crump, who is a data processing specialist. "I have become a better mom because of it because I have more time to spend with my kids because I work in town and not having to get on the bus at 5 in the morning to not make it home until 7 in the evening."

Jon Levingston, executive director and economic development authority of the Clarksdale, and Coahoma County Chamber of Commerce member, was quoted in the town newspaper in February of 2019 saying PeopleShores is a global leaders in the development of robotic process automation and artificial intelligence software and that Clarksdale would be the first in the region to offer these services and jobs to locals.

"We learn that we often label people by virtue of race and socioeconomic status," said Levingston in a Vanity Fair article about PeopleShores in Clarksdale. "By doing so we limit our possibilities, and when we cease to do this, we enlarge our possibilities, and create opportunity in areas of the country that desperately need those opportunities. I think that that's what we've done here."

In just a short time, PeopleShores officials have said they have expanded to offer 200 direct jobs, providing wages and benefits that have improved the lives of not just their associates who may not have had this opportunity elsewhere, but to more than 500 family members.

That impact is what attracted Pine Bluff Mayor Shirley Washington. When first introduced to PeopleShores, Washington said company told her it tries to empower the underemployed.

"Some of the people that they pick up are homeless and they give them the training so that they can feel valued," said Washington. "They are giving them skilled jobs that they can carry anywhere in the country. They don't have to stay right here in Pine Bluff, Ark., where we'd like them to stay, but if they choose to move on to another city or state, they have a job training skill that makes them marketable."

The history of the company gives an explanation of the sincerity it espouses and the impact the company makes on the communities where its employees live. According to IndiaWest.com, an Indian newspaper, Murali Vullaganti, the founder and CEO of PeopleShores, first built a successful career for himself spending a decade and a half in the U.S. and another five years in the Asia-Pacific working at large corporations.

The founder and director of the global financial markets group at Electronic Data Systems -- now Hewlett-Packard -- moved back to India in 2008 to change his purpose in life.

It was then that he created RuralShores, a company that focuses on job creation for unemployed young people in underserved areas of India where over 4,000 people have been trained.

In August of 2017, he established a center named PeopleShores in San Jose, Calif., where the company pilots and researches new technologies emerging from Silicon Valley. Employees have a range of backgrounds, several of whom are on the autism spectrum, have experienced domestic violence or were formally homeless or experiencing poverty, according to PeopleShores.

Clarksdale employees primarily experienced poverty or homelessness also. Quoted in the Clarksdale Press Register in December of 2018, Vullaganti said he believed in the talent of the residents, no matter the background.

"With a lot of these people, we believe that if we train them and give them the right skills, we're pretty confident that they will succeed," he said.

The company's vision is to transform people into confident, caring and knowledgeable professionals through impact sourcing, offering 320 hours of foundation training and 160 to 320 hours of advanced technical and/or process training.

"I was chosen out of over 200 candidates to start training, which consisted of 420 hours," said Keaton. "I'm currently the project manager of the customer service department here at PeopleShores where we are helping the state of Mississippi file over 20,000 unemployment claims daily so that they receive the much-needed monetary benefits to take care of their families during this pandemic."

To help expedite filing and processing new claims, PeopleShores partnered with Horne CPA, a Jackson business advisory group, and MDES to start a program. This program allowed for 75 positions in Clarksdale to focus on decreasing the hold times, getting claims into the system quickly, and providing support to those affected.

On-the-job training is another 300 hours. The employee can focus on a variety of areas, including RPA, data analytics and business process automation. This type of training involves certification on specific platforms.

PeopleShores released the following statement in its 2019-2020 progress report:

The company started in Clarksdale with 25 employees and now has 85. According to Crump, most positions begin at minimum wage with salary increases.

Keaton said PeopleShores is not a job, it's family.

"Thanks to PeopleShores, I am now proficient in computer technology as well as business savvy," said Keaton, who said she can enjoy life comfortably and provide for her family. "PeopleShores has given me the opportunity to have a career and the feeling that I am truly part of something great."

For Crump, she values the training but more importantly, the impact the company has had on her personal life. After enduring horrific injuries in a car accident shortly after gaining employment there, Crump said management supported her through her healing when she wanted to quit her job instead.

"They were like I know you want to quit but do not give up -- we are here for you and when you come back to work, your position is still going to be there," she said as she became emotional and began to cry. "I'm just hoping the center that they're going to open where you guys are at [Pine Bluff] have so many people who are as lucky as we are to have people on your side like I had on mine."