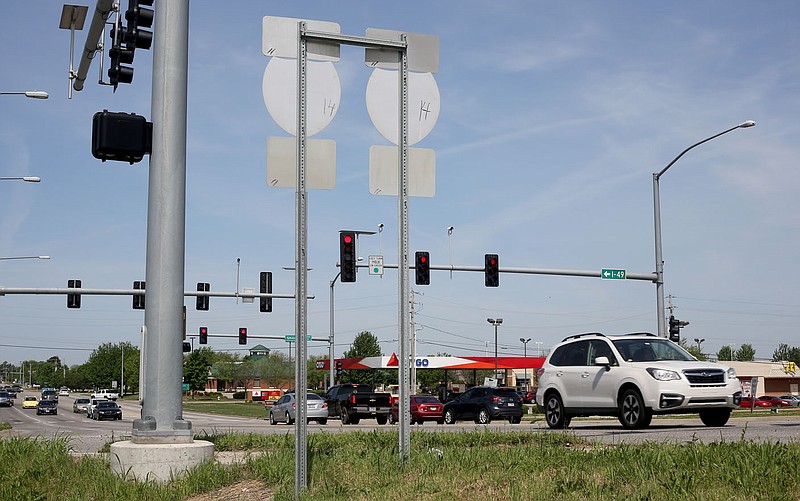 Traffic travels east on Fayetteville's Wedington Avenue at the Interstate 49 interchange in this May 2018 file photo.

A second attempt to attract competitive bidding on an expensive, high-profile interchange project on Interstate 49 in Fayetteville on Wednesday failed to clearly separate itself from the one that the Arkansas Department of Transportation rejected in November.

In the end, it was the same bidder, Manhattan Road and Bridge Co. of Tulsa that submitted the lowest bid both times.

In November, Manhattan's bid was $37.8 million and the only bid submitted.

On Wednesday, the contractor priced the job at $37.6 million. It was one of two bids submitted. The other, by APAC-Central Inc. of Fayetteville, was $38.3 million. A third, Mobley Contractors Inc. of Morrilton, had an opportunity to bid but chose not to submit one.

Philip Taldo, a Arkansas Highway Commission member from Springdale, said of the two bids from Manhattan Road and Bridge that"$200,000 isn't a whole lot of difference. It could be that it's just going to cost more."

The bid letting included 24 state highway projects with low bids worth $104.9 million, a dozen city street projects worth $3.2 million and seven county road projects worth $2.6 million. State transportation officials will review all the bids before contracts will be awarded.

Improvements for the Wedington interchange have been in the works for years, according to regional planners. It was originally identified in a 2006 Interstate 540 Improvement Study and has been part of the overall transportation plan to improve the capacity and safety of I-49 and its interchanges between Fayetteville and Bentonville.

The project is about controlling left turns on Wedington during the commute times in the morning and the afternoon when a lot of drivers are trying to turn onto I-49, according to state transportation officials. The Transportation Department has proposed a loop ramp in the southeast corner of the interchange and two dedicated lanes to get off Wedington and go north on I-49 for traffic approaching the interstate from the west.

Eastbound traffic on Wedington through the interchange no longer will have to wait for cars turning north across traffic.

The plans also show a widened overpass bridge, fewer turn signals on Wedington and a bicycle and pedestrian side path on the north side of the interchange.

The state and city jointly designed the interchange to incorporate bicycle and pedestrian improvements over I-49 as part of the project. Changes to the first draft of the plan were made for bicycles and pedestrians that will cost Fayetteville about $415,000.

The project includes raised curb medians on Wedington to restrict left turns. Drivers will be able to turn left, but they'll have to go to a traffic light.

The interstate underneath the interchange already has been widened to three lanes in each direction.

"Everybody, the city of Fayetteville, is anxious to get started on this," Taldo said. "We've been working on it a long time and everybody has put a lot of time and effort into it and really want to get a contract on it and get it going."

Other significant projects on which bids were opened Wednesday, including bid amount and low bidder: