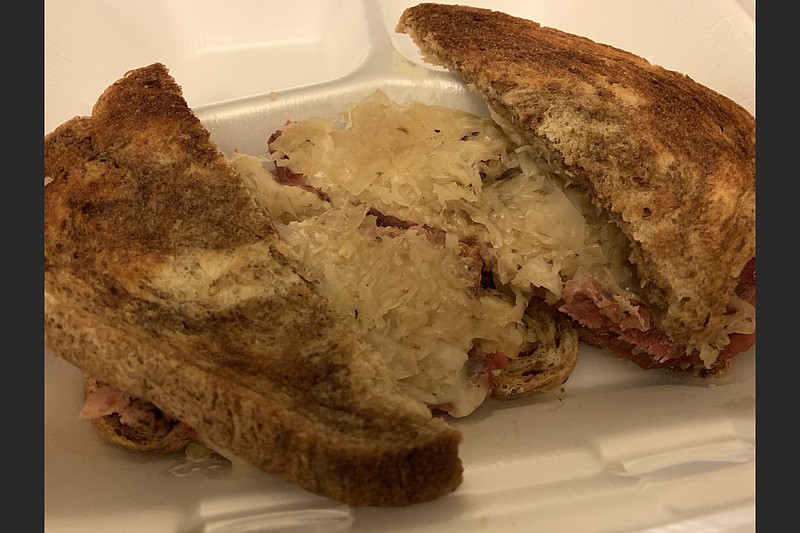 A side benefit of wearing masks is that in addition to protecting us from microbes, they also filter out — at least partially — cigarette smoke.

In pursuing what has turned out to be a pub-grub-centered column this week, we found ourselves at two establishments that permit smoking on the premises, and also, therefore, don’t admit patrons under 21.

People who smoke need places where they can dine and smoke, we suppose, and the rest of us are free to avoid them. However, we weren’t expecting smoke at either of these places, and if there was something indicating we’d run into it on their Facebook pages or the websites, we sure missed it.

Cigarette smoke notwithstanding, we stuck to our rules: None of these places are chain outlets, they were all within our standing radius so that food should be hot when we get it home. And we paid for all meals.

WHAT WE GOT: Reuben ($8) with a side of potato salad

Khalil’s makes a pretty decent Reuben, which, unfortunately, the menu misspells — as so many do — as “Rueben.” We got a decent-size sandwich of thick-sliced but lean corned beef with Swiss, sauerkraut and a minimal amount of Thousand Island dressing on grilled marbled rye bread. The potato salad was fairly tasty and of a good texture and well chilled.

HOW IT WENT: Actually, if we had delved deeply enough into the pub’s Facebook page, we would have found the line “must be 21 to enter.” Which could have been a tipoff that it’s a smoking establishment. We didn’t delve that deeply until after our experience there, though. We looked at ordering off the menu we found online, but it turns out about half the items on it are no longer on the current menu. We ordered and paid in person and waited about 15 smoky minutes for it to come out of the kitchen.

HOW IT’S GOING: The place was relatively busy with smoky customers (and staff — the hostess who greeted us at the door, checked our ID and did a temperature check lit up shortly thereafter) but there were no other to-go orders. 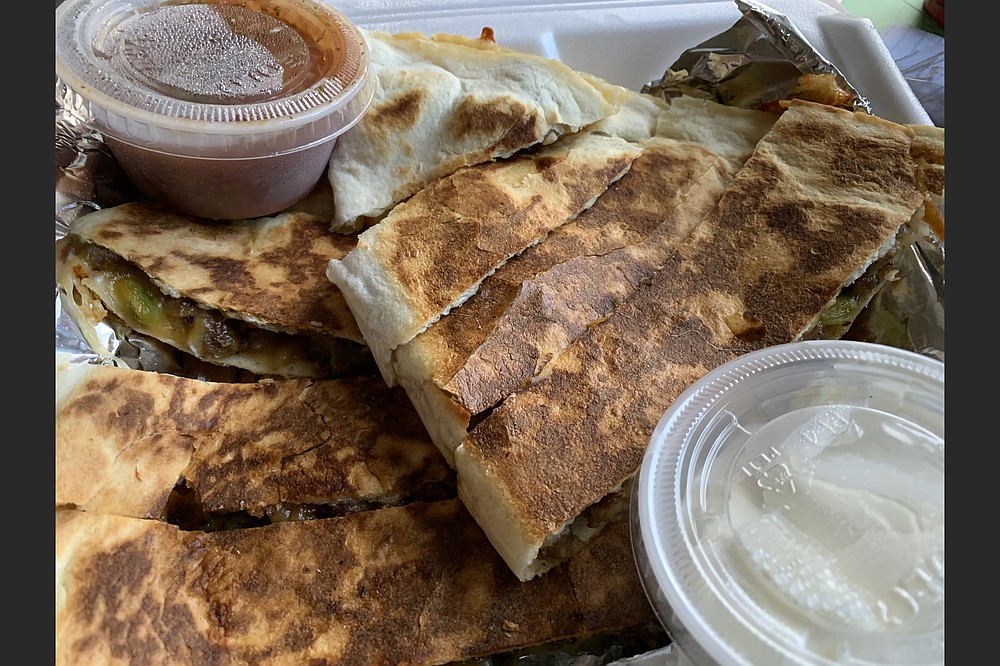 We haven’t been to Reno’s in a long time, and had forgotten that it, too, is now a smoking establishment, admitting only patrons 21 and older. The menu offers gourmet pizzas, upscale sandwiches (and it spells “Reuben” correctly) and some interesting “starters,” including this enormous and quite enjoyable quesadilla, a crisp-fried flour tortilla with grilled lamb and cheese; it comes with small plastic cups of sour cream and a slightly acerbic red salsa. (There are two other quesadilla options: Spinach, $7.25. and Chicken Fajita, $8.) If you are into lamb, you can also try the Lamb Slider (also $9), “two grilled lamb patties served on slider rolls with tomato, cucumber and our chipotle tzatziki sauce.”

HOW IT WENT: This time we placed our order over the phone, and paid for our lunch, which was ready within the 15 minutes we were promised, on site. So our exposure to the two patrons at the bar, one of whom was smoking, was quite short.

HOW IT’S GOING: There were two other to-go orders on the bar when we arrived. 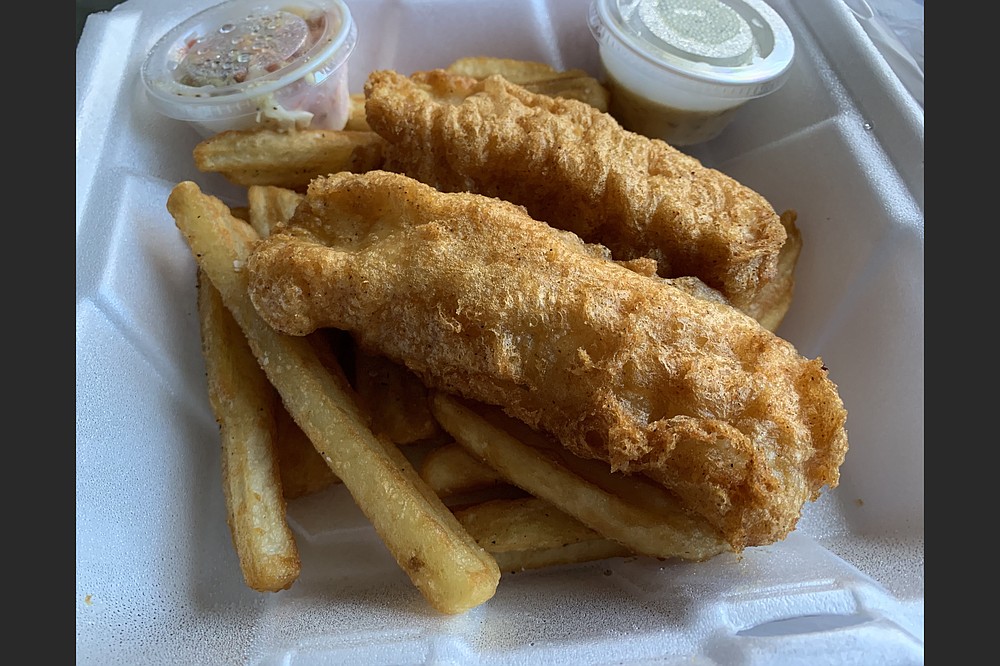 Oh my cod! Fish and chips is a must menu item for any pub, and we enjoyed ours from Cregeen’s Irish Pub in North Little Rock’s Argenta District. (Arkansas Democrat-Gazette/Eric E. Harrison)

We suppose you can’t be a real pub unless you offer fish and chips, and Cregeen’s is as good as any we’ve tried: Two massive cod filets in a crisp, moderately thick beer batter resting on a bed of thick, ridge-cut fried potato planks. Ours came without malt vinegar or ketchup for the chips, both of which we missed but managed to do without.

HOW IT WENT: As with Khalil’s, we discovered when we arrived that the online menu was unreliable — what’s available is chalked up on blackboards at the entrance and behind the massive bar, where we placed and paid for our order. It took about 10 minutes to come out of the kitchen, but it was a pleasant, smoke-free wait.

HOW IT’S GOING: A couple of widely spaced tables and one bar stool were occupied when we came in late in the lunch period. There was one other to-go order in progress. 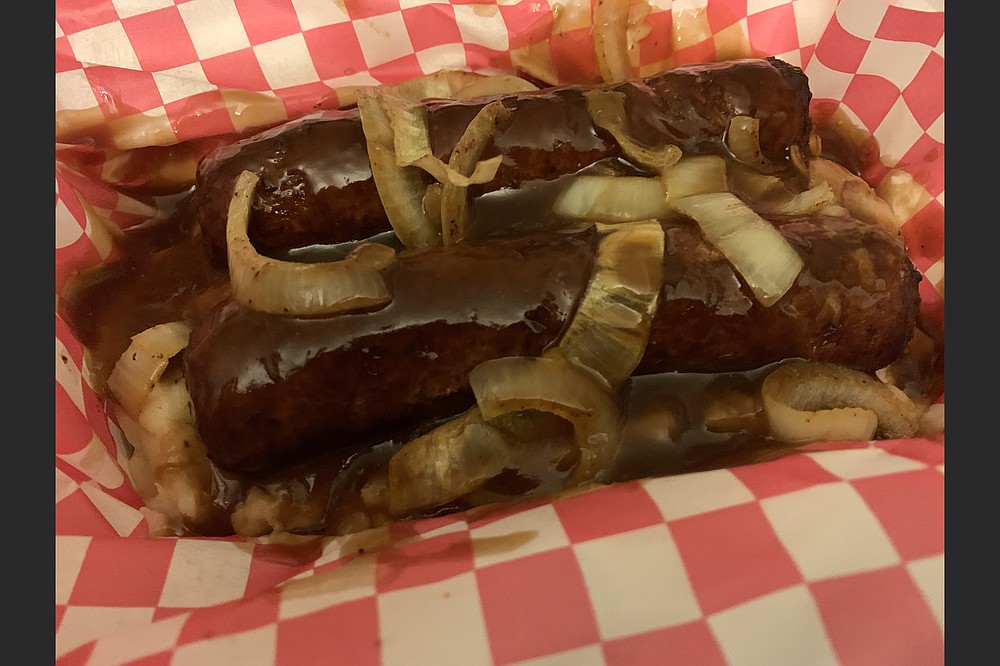 Having eaten the fish and chips at Cregeen’s, we thought it best to find something else characteristically Hibernian at Hibernia, so we went for the bangers and mash, two fantastic, monster pork sausage links on a bed of mashed potatoes, all in a rich, strong Irish brown gravy and garnished with lightly singed onions.

HOW IT WENT: We were in the neighborhood, so we stopped by and placed and paid for our order at the bar. It took nearly 15 minutes for the food to come out of the kitchen. Hibernia doesn’t allow smoking inside.

HOW IT’S GOING: There were two other patrons at the bar, both of whom appeared to be drinking but not eating, while the Irish-accented bartender told tales of his years tending taverns in New York. 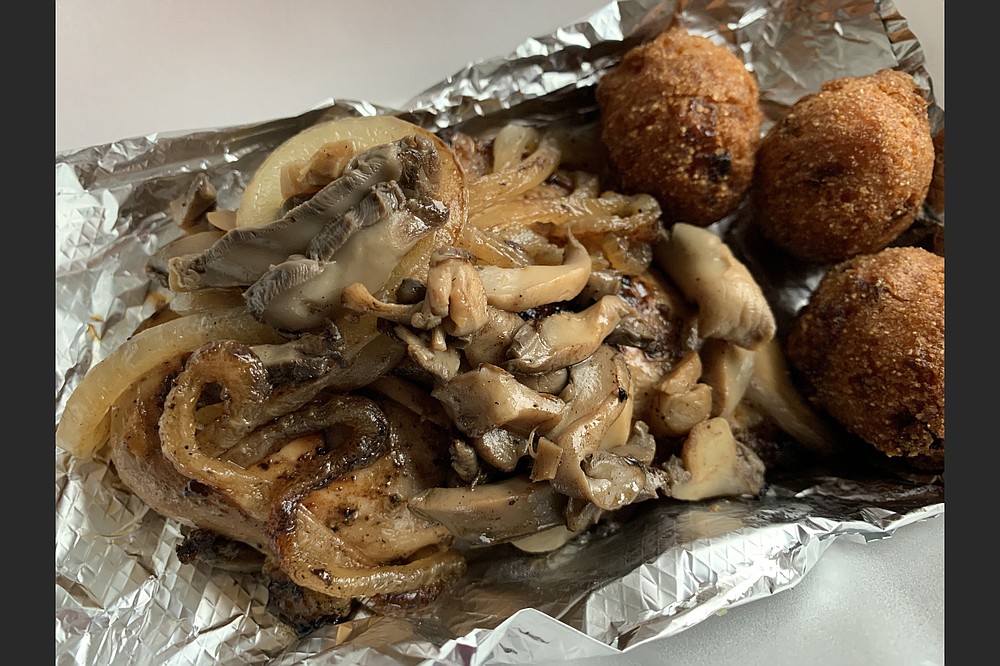 The grilled chicken dinner was pretty much the only non-fried entree at Crazee's Cafe. We got ours with side hush puppies, baked potato and a small salad. (Arkansas Democrat-Gazette/Eric E. Harrison)

WHAT WE GOT: Grilled chicken dinner ($14.95), with sides of hush puppies, a baked potato and a small salad.

Though there are some intriguing nonfried salad and sandwich options, plus burgers, chili and a range of appetizers, just about all of Crazee’s entrees are fried with the one exception. Our grilled chicken breast, topped with grilled onions and mushrooms, was excellent, and we made quite a meal out of it even without the side items with which the entrees come. We chose a small dinner salad with sweet vinaigrette dressing (one small plastic cup was plenty, but we got two) over slaw or dinner salad, dense hush puppies over bread and a large baked potato over fries.

HOW IT WENT: We placed and paid for our order online; it was ready within the 20 minutes we were told. We never did get the email confirmation we were told we should expect, however. Crazee’s is a nonsmoking establishment.

HOW IT’S GOING: There were a number of dine-in customers and more were entering as we departed. There were at least four take-out orders besides ours awaiting patron arrival.